Why not reward blind voting?

Here is a partial list of the biases blind votes eliminate, making them intrinsically more valuable than naked votes:

Systematically removing bias promotes trust in new users, which will increase our user base.

For these reasons I feel voters who choose to vote in the blind should earn reputation slightly faster as an incentive to self-abstain from prejudice. As a user preference, vote scores are not displayed on any post until you have voted on it.

Applicability across different exchanges likely will vary. I feel hidden voting is universally beneficial yet naked votes should remain the default option.

Moderators on this site have confirmed that they use the vote score to decide if they themselves will cast a vote (fallacy could be due to any of the above biases). As such vote scores are influencing site moderation to the detriment of objective post content evaluations.

Some moderators argue a vote score helps make a decision whether or not to close a question. This is another argument in favor of this feature because moderators will have an incentive to cast a vote - they want to see the score. Yet in either case, the option is ...an option. Mods can elect to vote in the clear. The moderator workload would also be greatly reduced. As a feature it addresses many SE questions, such as these linked below.

“Spam Voting” - Should we stop it?

Would voting for posts based on their score be considered fraud?

Useful answers should go beyond "yes" or "no" but should have constructive content including ideas, pro's, and con's of:

A very interesting idea, but it only addresses one specific use case, namely:

But that isn't the standard use case.

Most people come here because some search engine send them this way. They have a problem that maybe question Y addresses. And what happens then?

But how do you identify what is most likely helpful, in case there are 5 or 10 or 20 answers? By first looking at the vote counts.

In other words: these questions are not polls!

They represent a knowledge base, and the entries in that knowledge base are intended to be ranked according to quality. Most users need to see the vote counts first, otherwise they are likely going to waste their time with low quality content you find at the bottom end of highly frequented questions.

Long story short: I do think there is sense in this idea, but in order to really "roll" such a feature, we would need to gather a lot of statistics upfront that tell us when and why people vote where.

If you prefer not to see post scores until you have voted, I've created a userscript for that.

The idea is not foolproof (nothing is), however a productive user will tire of the steps needed to get the hidden voter benefit without being hidden (such as by searching while logged out, writing notes, then logging in). The implementation needs to ensure the time wasted circumventing it will not be worth the ROI.

Ultimately this solution in progress renders jumping in and out of blind fairly useless. As the user accumulates time in the blind the benefit increases.

Reward: The best reward is the status of being known as a self-disciplined objective user. Another consideration at this point to simply gain 1 reputation for each 3 blind vote credits. 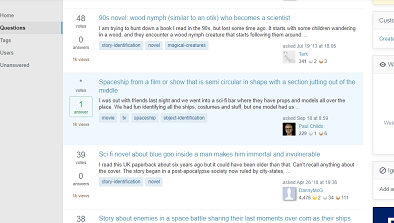 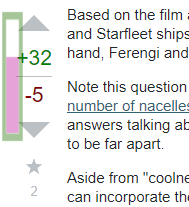 A blind vote for the purposes of this feature has the following characteristics:

Post order by score: This remains unchanged, however the blind voter only sees the ordinal rank of the post (first, second, third, etc.) without knowing the scores or point spread between them, or even if any of the posts are actually "good"

Answer score bracketing: See fig. 1. If only one answer in a group is "blind" the post above and below will partially reveal a post score. Bracketed posts are ineligible for blind voting, in the definition. The score is displayed.

Vote transparency - This concept conveys how objective a post score is. A 100% opaque gives users confidence that every vote cast was protected from common biases. As a graphic gauge it doesn't reveal anything more than a ratio. The transparency number remains hidden to obstruct calculating votes. A score of 2 with a ~50% gauge can still be either 1/1 or 23/25 (naked/blind). The display votes privilege is protected.

New variables: This system adds variables to users, questions, answers, votes, profiles, and searches. It is far-reaching to do right however I believe improved objectivity will reap rewards in both site traffic and users.

Not the answer you're looking for? Browse other questions tagged feature-request voting serial-voting .

79
User cards are no longer showing reputation or badges across the network
66
“Spam Voting” - Should we stop it?
26
A better serial voting trap
3
Would voting for posts based on their score be considered fraud?

97
Should we reduce rep bonus for upvotes on posts with a negative score?
873
Why aren't people voting for questions?
5
What is our reward for voting? What is the metric for voting?
252
Reset votes on migrated questions
39
I do not feel like I am “winning” when I am voting
403
Reward finding duplicate questions - +10, +2, -5
1160
Don't throw away all votes when a user is deleted
571
What is serial voting and how does it affect me?
252
A/B testing the sticky vote controls