What is this ad actually for?

It appears someone is trying to promote clouds on the network. I've seen this ad on various sites, and as a sidebar and banner style ad.

What is it for? Clicking it results in nothing but selecting a part of the ad, as can be seen in below screenshot. Which makes it clear the clouds are just made up of white circles. Is there some hidden message? 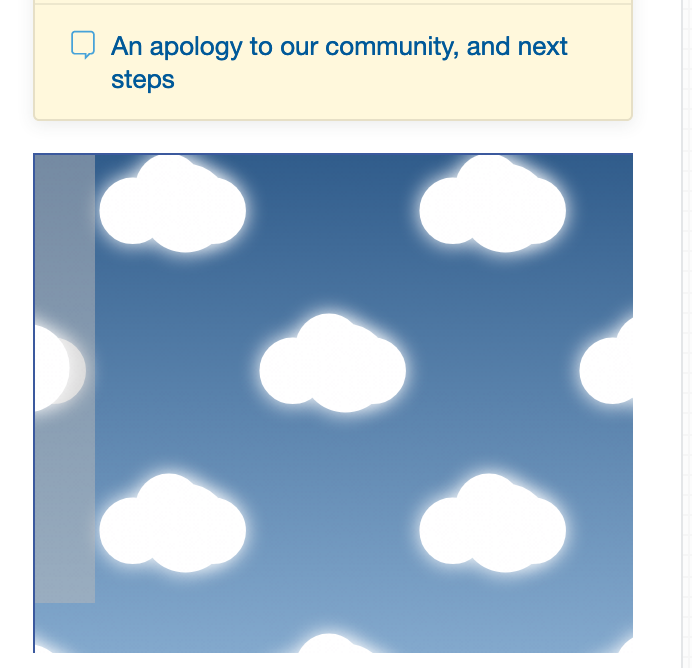 Following the comments this appears to be a regression of this thread: Why an image of clouds made of dots as an ad?

Yesterday I encountered this sort of add out in the wild on the interwebs. So it appears to be something on the advertisers side, not specifically to SO. This happened when I went to read an article from a local newspaper through facebook, which renders a sort of primitive browser within facebook.

As far as I remember (from digging into it in the past), it's a generic banner used as result of internal error.

The answer by the (former) SO developer to the linked old bug report hints that as well:

The clouds are due to an ad tag being implemented improperly

Not the answer you're looking for? Browse other questions tagged discussion bug advertising regression .

108
Is it possible to remove the Careers banner with the dying starfish?

1156
Are there any clones/alternatives for running a Stack Exchange style Q&A site?
928
Why aren't people voting for questions?
204
What do icons on the tags mean?
604
Exit strategies for "chameleon questions"
1885
What is the XY problem?
540
The current review system encourages fake reviews; some people upvote everything rather than actually fixing problems
155
Kind, courteous, inclusive, intolerant of bigotry, racism, etc. Fine, I agree. Now what about my feelings as a mod?
575
Change in roles for Jon Ericson (leaving SE)