Today, there was yet again an anti-semitic question on Stack Exchange, about Nazi Germany's actions against the Jews.

What do I mean by "yet again"? Well, in this Skeptics meta question from February this year, I noted that half of the "helpful" flags on questions on Skeptics.SE were about the holocaust, and approximately half of the remainder were about Jews or Nazi Germany. And the majority of the questions I flagged for holocaust denial were around for more than two hours, ranging from 6 minutes to 8 hours, 20 minutes.

And is it just Skeptics.SE? Nope, here's a quick sample from History.SE. One, two, three, four, five - and that's not going all the way back in my flag history. There have been some problematic content on Politics.SE, but usually it's less blatantly antisemitic, apart from this one.

I don't think it's a problem with diamond moderators. They've tended to do the right thing, and the fact that it happens on more than one site indicates it's probably not an issue with a particular moderator. I also believe that the smoke detector tries to deal with this.

I don't think it's an unsolvable problem - it seems to be the a very small handful of people or groups posting the same hateful garbage again and again every few months, for example compare Were Nazis favorable to zionism? and https://skeptics.stackexchange.com/questions/44757.

For the avoidance of doubt, I want Stack Exchange to act on all bigotry, and I've flagged on a variety of bigotries (people who are bigoted against Jews are also bigoted against other groups), but this is the particular ongoing problem I've faced in my experience as a non-diamond-moderator high-rep user.

A voluntary organization consisting of passionate Stack Exchange users have built a bot named SmokeDetector, aimed at these posts that should be red-flagged (spam or abusive).

We're aware of this "holocaust" troll and this very word has been on our watchlist. Once the SmokeDetector bot reports such posts, we'll come and flag them to death quickly.

If you see such posts in the future, you're free to inform us in Charcoal HQ chatroom and we'll handle it.

We've already hashed this out on Skeptics Meta, so readers here should check it out there first.

One thing I think we need here is perspective to see what kind of problem may exist that we can solve. These trollish hate things will always be posted. The point of trolling is to be offensive while not breaking the rules. They get posted and will probably always be. That leaves us with repeatedly downvoting, closing, and deleting. All these hate posts get handled in this way quickly. But when we see repeated human action our thoughts should lean toward efficiency and automation. Can we make a computer accurately imitate a human in these instances, without causing adverse effects? Can we save ourselves some time and trouble? I'm all for automating human tasks, but only if data supports the need and it can be designed without actually creating more exceptions and need for human intervention.

The Smoke Detector is a neat tool, helping to speed up human response. I worry however that in these types of things, nuance in language and intent is near impossible to condense into a script, so keeping review human is almost always preferable.

If SE could actually put some data together we can see if we should try to automate in the first place (ie determine if it would reserve human effort). How to automate is another question, and one I'm not convinced we could even do. It depends on what the data shows.

So to be clear, I don't think we're solving an offensive content problem, namely because ot human review processes are cleaning it up pretty quickly. So if there's a problem, it's a bulge in overall human effort. A computer might save us all a lot of time.

Posting this as an answer, so that it will not be in the edit history of the question, because people were casting doubt on what the questions were like.

This was the most recent question about the treatment of Jews by Nazi Germany. 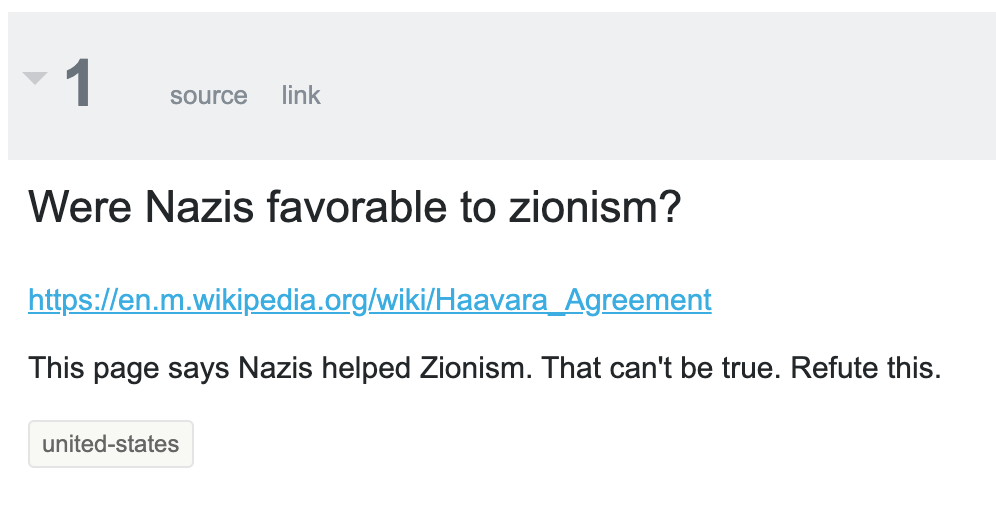 You can see that it is extremely similar to the second most recent one I encountered, and from a while ago. If data from this had been fed to the smoke detector, it would have detected the most recent one, but it did not get detected. 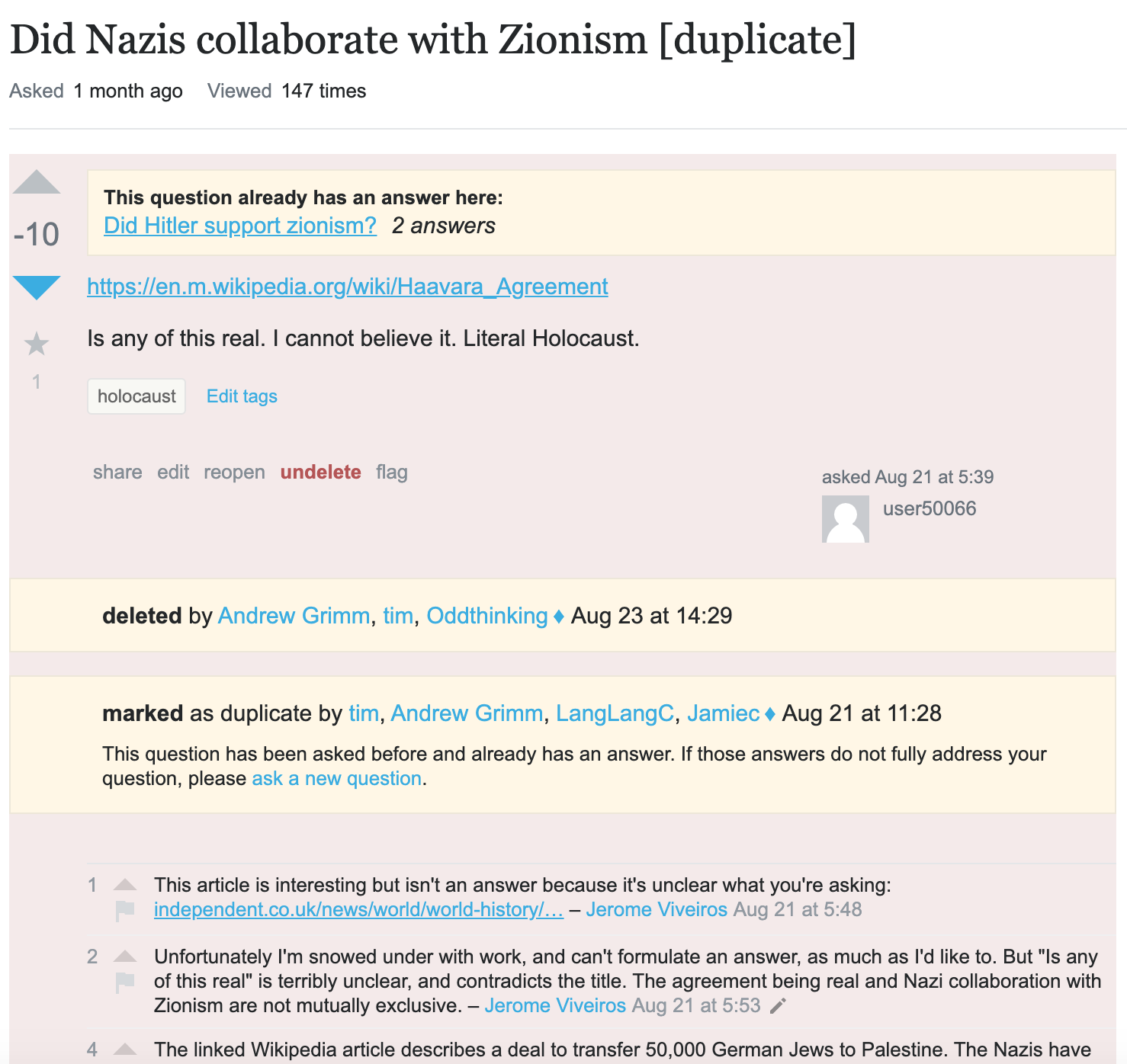 These questions were redundant, because there’s already a well answered question Did Hitler support zionism?

If any moderator wishes to delete answer, go ahead. I do not mind. I hope this is sufficient for people to see that there are bad faith, offensive, questions occurring.

I think the best way to deal with bigotry in general is to take everything said at face value and potentially answer it if it is interesting enough or downvote it if not, or if a claim is trivially falsifiable. (Note that I find it especially valuable to sincerely answer even bad faith Holocaust denials. I have personally learned a lot by taking seemingly stupid or provocative questions seriously and answering them best I could. It never hurts to have a reality check.1 Since the claims on Nazis and the Holocaust are probably factually resembling each other the answers will be readily available anyway.)

One of the reasons for my opinion is that "bad faith" is difficult to prove and will often result in false positives (see the recent mod ban).

It appears to me that the rules applying to all posts are sufficient to deal with provocative troll posts, including this particular flavor: Bad posts are downvoted, offensive posts are flagged and removed. Does that create an unsustainable burden on the moderators?

1 Have you ever tried to explain to some skeptic in detail the earth's thermodynamic equilibrium mechanism and how within this framework the greenhouse effect works (CO2 vs. H2O absorption bands, temperature gradient in the atmosphere, sun activity and earth orbit effects etc.)?
Share
Improve this answer
answered Oct 16 '19 at 12:19

Individual questions seem to be resolved as quickly as much be expected. The only way to speed things up should be paid moderators working across the network.

However, I do think that some of the concern might be that these questions are not made in good faith (i.e., a serious historical question about an unpleasant topic). Bad behavior like that should be grounds for a moderator warning (no idea how you would phrase it). A pattern of such behavior should be grounds for a ban (user or IP) under the CoC as well.

Not the answer you're looking for? Browse other questions tagged discussion offensive .

134
How many more casualties in the war on pronouns?
9
No email acknowledgement for reporting CoC violation via web site