Are other sites (besides MSE) growing inactive?

But I have noticed that, at the very least on Writing.SE, where I spend most of my time, questions are getting fewer views and fewer answers, fewer votes are being cast, and fewer questions themselves are being asked. I've also noticed that flags are taking a long time to be processed, probably because of the fact that Writing.SE has no active mods.

Many people are focusing on questions, which is always a very low stat on Writing.SE and didn't see much change - there is not much that could possibly change there. Traffic is also popular, but didn't see a lot of change, as most people are still coming in via google.

But according to the site 5k rep analytics the number of votes dropped to around a third (low activity days) to a fifth (high activity days). I think "number of votes" would be a better metric to show how the situation is affecting the core users who are mostly providing answers and voting / editing / flagging / ...

The people that are contributing site views won't know about this. And many prolific askers aren't that active or interested in meta or other things happening on the network. The people mostly answering are the ones that are more likely to participate on meta. Of course there are exceptions to that, but in general that seems to be the trend. At least that's my experience, which is mostly based on WorldBuilding.SE and Writing.SE

I think this query that I found on Interesting queries on Data Explorer could be easier for relevant stats. It gives everyone an overview similar to the 5k / 20k rep "mod tool" site statistics, so that everyone can check every site they are interested in and see how the situation affected the sites you care about.

Here is an example for Writing.SE for the last year; you can see a big spike in march because of a contest to get past 10 questions per day - and a sharp dropoff the last weeks, especially when it comes to votes; normally the "votes / 7 (for scaling)" line is above the "answers" line, now it's below that line: 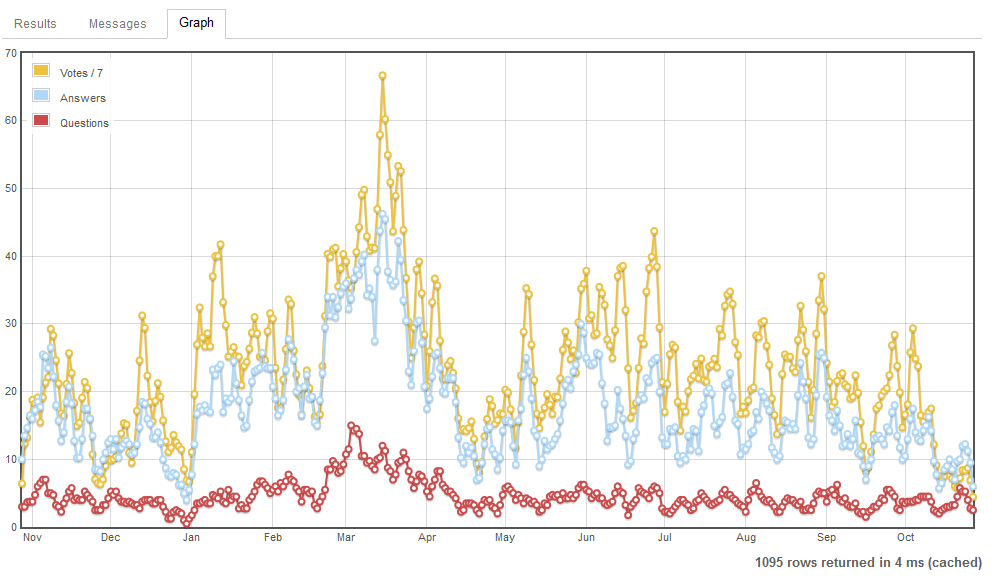 It's near impossible to tell on your timescale and sample size.

At this point, it's completly unclear if for instance on MSE you just got used to "peak outrage activity", that is, 10x-20x as much as usual, which is now starting to die down.

For other sites, you probably need a month or two more to be able to pull actual stats, but the subjective feeling that they're becoming less active could also be influenced by your opinion or perception of recent events, in an effect not dissimilar to the placebo effect.

It's too early to tell.

Here's the data for Retrocomputing, re-scaled based on the traffic levels. Yeah, it's pretty obvious that something happened right around the start of October.

Here is the traffic graph for Ask Different. It looks like traffic was a bit lower the week after 'the event', but subsequent weeks seem quite normal.

Number of posts and votes follow similar patterns. Most of the traffic is from search engines, i.e. users who are completely unaware of current events; less so for the posts and votes but even there, most users in the network don't have a clue about what's going on.

I've checked Chess Stack Exchange as well, but there it's completely unnoticeable, probably because that site gets most of its incoming traffic from Hot Network Questions.

I took a look on the data at Interpersonal Skills (IPS).

Here is what I saw on the traffic graph:

I took the time to cross-reference those data with our HNQ feed and it seems that the huge drop of traffic between 20 September and 02 October is due to the fact that we were out of HNQ (aka: none of our questions were "hot" enough to go to HNQ).

Those results don't surprise me. Every HNQ events that we had proved, again and again, that our traffic is very highly related to us being visible by the rest of the network (via HNQ).

So, if "Everything That Happened" had any impact on IPS traffic, it was not significant enough to be visible here.

However (but I have no concrete data to prove it), it did seem like we had more questions related to (trans)gender/lgbt+ than we usually have (but this might just be a confirmation bias of mine).

I can't speak for all of them, but I can give a partial answer for Politics.SE. According to Area 51 stats, we're now getting 10.5 questions per day. If I understand correctly, that's some rolling average and it's up from earlier in the year.

To follow Glorfindel in posting traffic. I see the same dent, though I'm not sure if it can be attributed to the debate on Meta:

And in keeping with Churchill's "Never let a good crisis go to waste", we even had some questions sparked by the debate on meta:

Is there a push, in the United States, to use gender-neutral language and gender pronouns (when they are given)?

Are countries other than the US concerned about preferred pronouns and how they relate to gender?

Do European politicians typically put their pronouns on their social media pages?

Also adding the number of votes as another answer did. It seems Politics hasn't really dropped by that metric either: 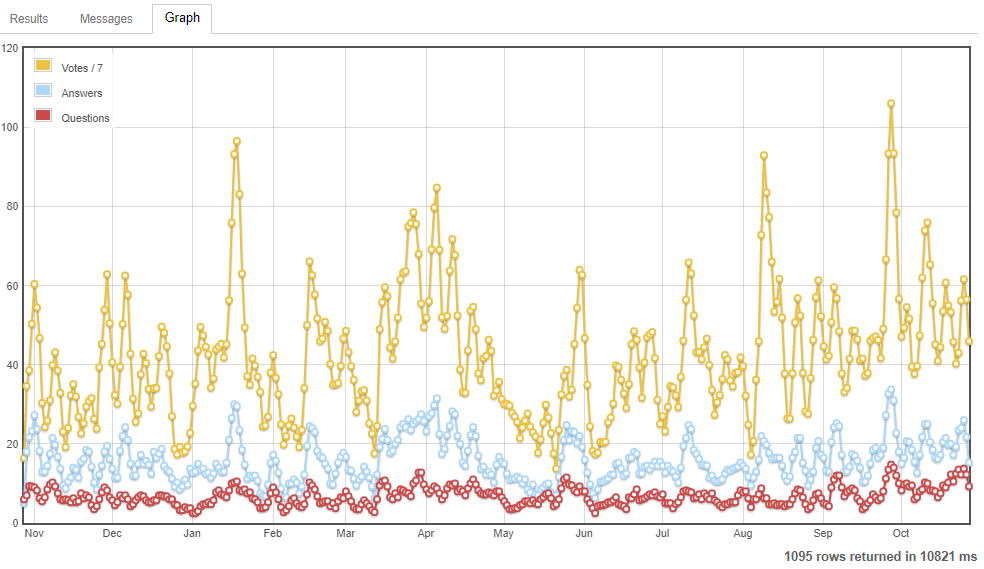 On the two sites that I have access to Site Analytics on (Mi Yodeya and Science Fiction & Fantasy), I don't really see enough significant changes in traffic or posts that would be easily attributable to recent Meta events. There is a lot of day to day fluctuation (usually based on weekday vs weekend or different times of day) but it's always been that way.

A quick count of questions on Christianity SE (which lost 2 of 5 moderators for religious reasons at the end of September) reveals 89 questions between 28 September and 27 October, and 82 between 28 August and 27 September. We did however have the first LGBT+ questions I can remember in five and a half years on the site.

Here's my crappy data explorer query as a response to this question (with credits to one of Glorfindel's old queries for most of the code). Basically, as everyone else has been saying, it's way too early to tell. I set a 'before' sample as the month of August, and then the 'after' sample as September 27th (the date of Monica's firing) to today, October 27th.

Criticism and changes are welcome to the query - SQL is definitely not my language of choice.

I see no change in the posted SO analytics, fyi.

Perhaps there was a 10% drop in votes and posts (and not traffic), during the first week of October only.

6
Q&A activity over the last month
2510
Firing mods and forced relicensing: is Stack Exchange still interested in cooperating with the community?
164
Interesting queries on Data Explorer
93
Should the weight of question upvotes be increased network-wide?
63
What effect does the current crisis have on the SE network?
56
Is it time for Stack Exchange, Inc and the community to legally separate amicably?
15
How does the activity on SE-sites compare to previous months/years?

626
Formatting Sandbox
604
Exit strategies for "chameleon questions"
423
Which computer science / programming Stack Exchange sites do I post on?
2793
A Terms of Service update restricting companies that scrape your profile information without your permission
496
Congratulations to our 29 oldest beta sites - They're now no longer beta!
2510
Firing mods and forced relicensing: is Stack Exchange still interested in cooperating with the community?
2265
Stack Overflow is doing me ongoing harm; it's time to fix it!
157
After the recent CM departures, are there plans to shut down network sites or Area 51?
758
New Feature: Table Support