Why was the Weekly Day of Silence post deleted? [duplicate]

Why was the Weekly Day of Silence post deleted? It was an answer to the question Monica's situation continues unresolved, is SE hoping the problem just goes away?. The system didn't allow me to vote to undelete -- there was a message saying it had been deleted by a moderator.

Why was no explanation given?

Second, when Question Y was deleted, an explanatory comment was provided. In this case, no explanation was given, and the second part of my questions asks specifically about this.

Third, the target audience for Question Y was volunteer moderators, whereas mine was aimed at any participant feeling frustrated and impotent to make their voice heard.

Lastly, Question Y urged an extended, continuous work stoppage. I suggested taking off one day per week, to show, through silence, the belief that the conflict can be resolved through transparency and dialogue.

Note, I have not found any clause in the Code of Conduct or the terms of service stating or implying that subscribers agree to visit the site and participate actively with any particular frequency.

I would think that a side benefit to the company of my proposal would be the reduction of traffic one day a week, which could contribute to an easing of tensions, by lightening the workload of the (paid) Community Managers, who have been stretched to the limit, coping with both increased volume on Meta.SE, and reduced volunteer work product.

I do understand that the company needs to be able to turn a profit, so as to be able to continue to host the sites in the network, and maintain and update the software.

There was no intent on my part to damage the company's image or profitability; and I don't believe there was any suggestion of such an intent in my post.

Below is a screenshot of the first half of the post in question. 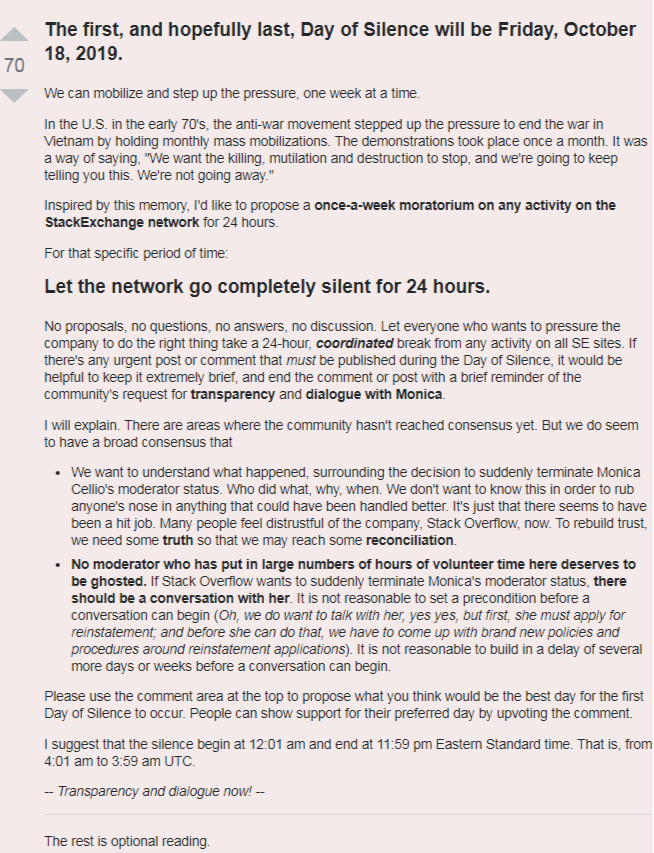 (If any member of SE staff feels that this is somehow disrespectful or hurtful to the company -- I would just ask, please don't purge the question from the site. Instead, please simply remove the image, if you feel that is necessary.)

Second response to second closure (after the questions was reopened and then closed again):

Once you get to the "I'm done talking!" stage, it's probably more forcing than persuading, and that we just can't host.

My question was all about persuading. It called for transparency and dialogue. It had nothing to do with forcing.

I've gotten kind of lost in the ups and downs of this question's roller coaster history. But here is a comment.

Tim didn't say they would quash all protest. In practice SE has not quashed all protest. You can call my proposal protest if you like. I think it's more productive to look at what sort of action is being proposed, and how it's being proposed. The line was drawn in an arbitrary way, even though Tim specifically said they would have to look at where to draw the line on a case by case basis.

I don't see that anything is to be gained by the movement for transparency and dialogue censoring itself. If management wants to shut down my proposal, let them shut it down. We do not need to make that decision for management. Let the question stand, and let the proposal stand. Let us prepare the ground for management to respond in a meaningful way.

I invite someone to vote to reopen, so that this will show up in the review queue. (I'm not allowed to re-vote to reopen.)

33
Is calling for protest actions allowed on metasites?
2501
Firing mods and forced relicensing: is Stack Exchange still interested in cooperating with the community?
664
Monica's situation continues unresolved. Is SE hoping the problem just goes away?
164
A very recent post asking people to go "on strike" was just deleted

504
How does deleting work? What can cause a post to be deleted, and what does that actually mean? What are the criteria for deletion?
716
How do I get attention for one of my own questions without a good answer?
836
What does "user was removed" mean and why did my reputation change because of it?
2501
Firing mods and forced relicensing: is Stack Exchange still interested in cooperating with the community?
299
An update on my resignation notice
664
Monica's situation continues unresolved. Is SE hoping the problem just goes away?
242
How can we put pressure on Stack Exchange Inc. without damaging the community?
981
Firing Community Managers: Stack Exchange is not interested in cooperating with the community, is it?
551
The company’s commitment to rebuilding the relationship with you, our community