All localized Stack Overflows seem to suffer from a decline to some degree. Why?

As previously discussed on Stack Overflow in Russian Meta, site analytics show a severe decline for quite some time. Here're stats of Ru.SO: 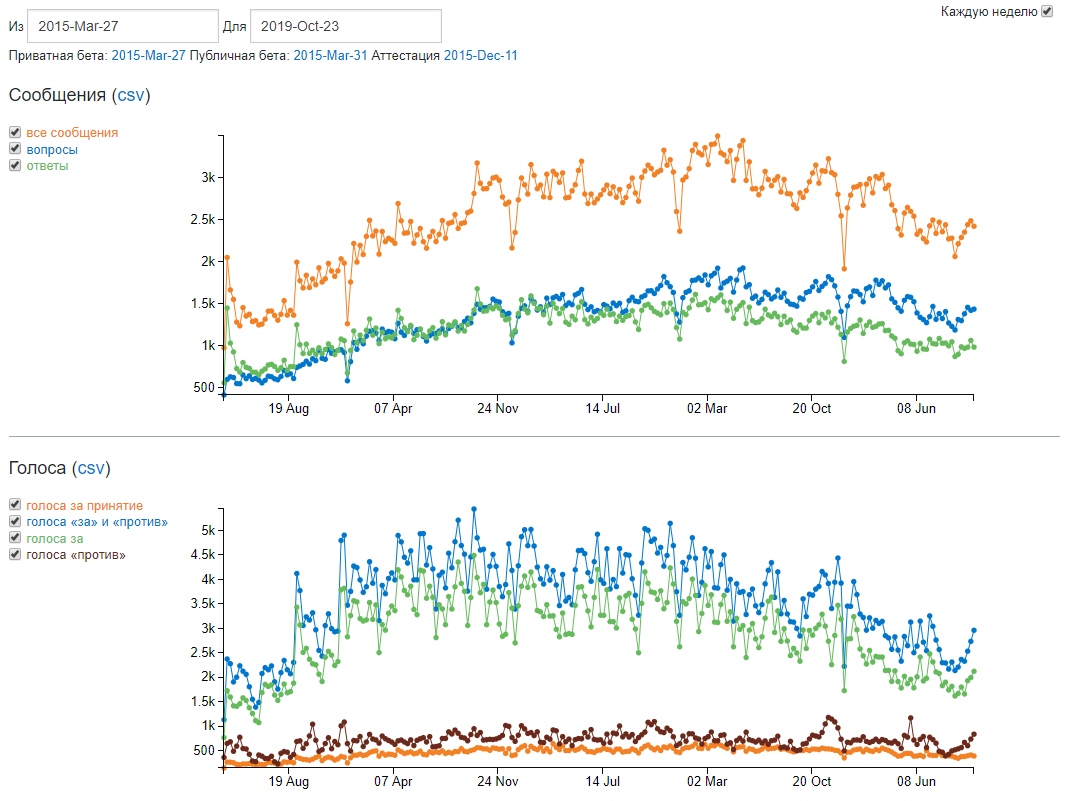 As you can see, all stats are on decline for two years. Answers and upvotes both dropped to about half of their previous values.

However, what we thought could be specific to Ru.SO, seems to happen on other localized sites as well, though to a less degree. 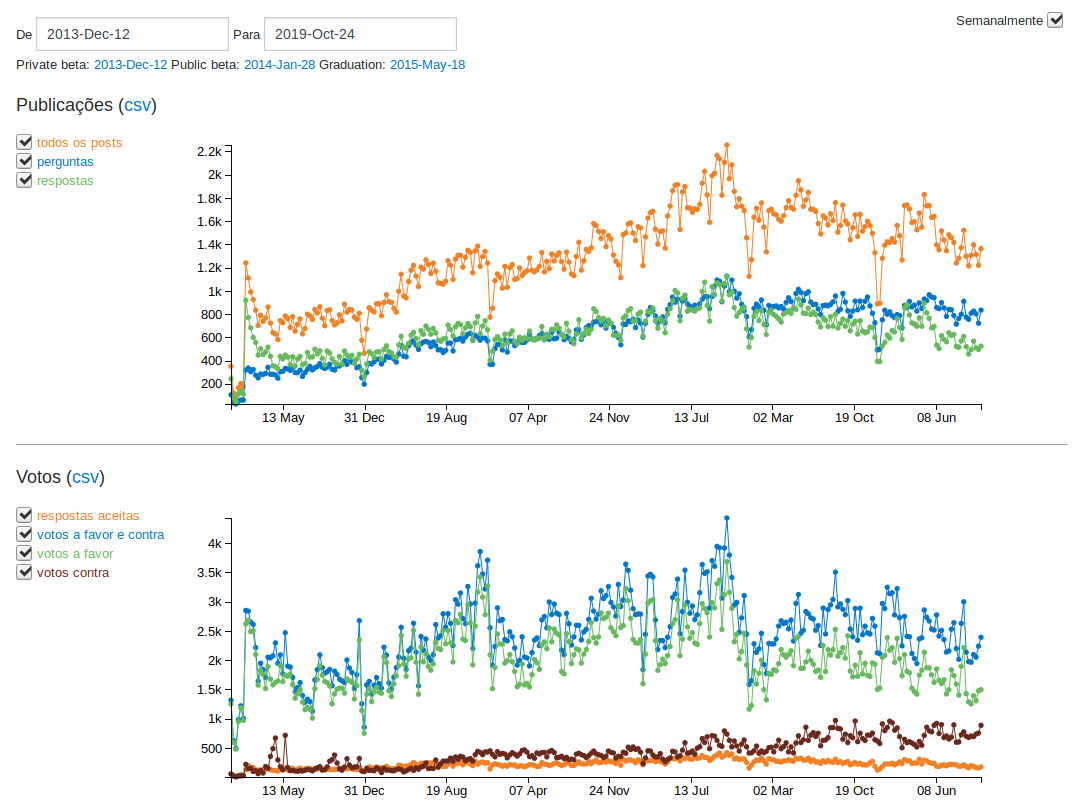 The number of posts started to decline without even staying stable for a while. What's even more frightening is the crazy increase in downvotes at the cost of upvotes, something I've never seen on any other site within SE network.

Es.SO suffers from the decline the least: 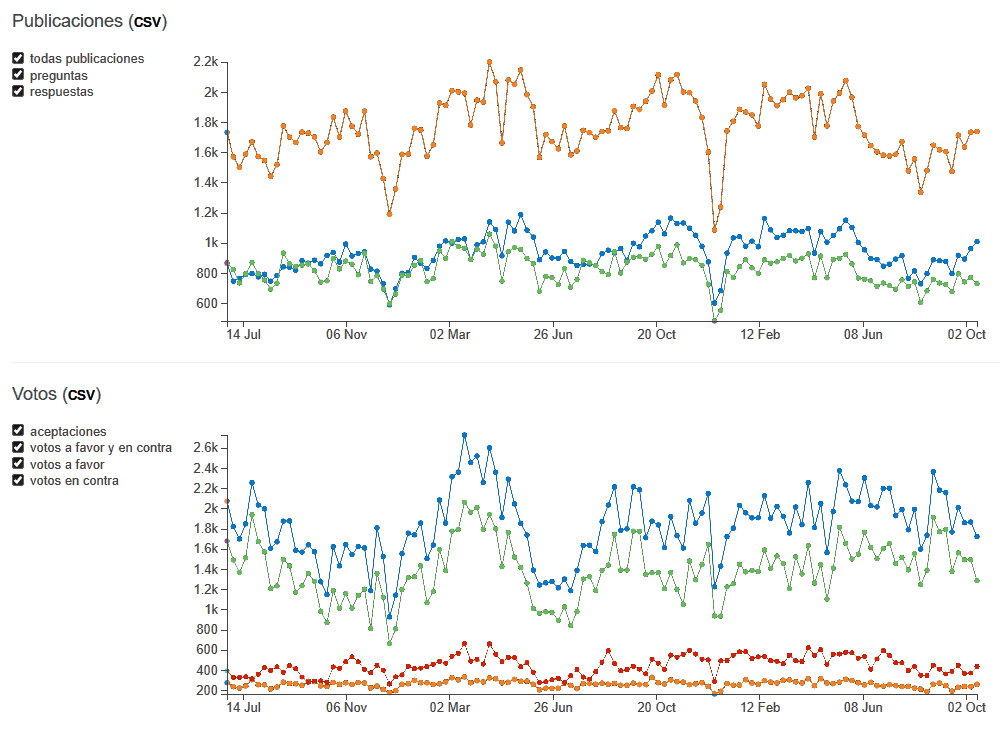 However, even on the seemingly most stable of localized sites, the last half a year shows a considerable decline in posts compared to the previous year, plus answers dropped below questions long ago.

What's going on? Why is this happening?

Not so long ago, the localized sites were showing very strong stats, beating most of other sites in SE network. They were growing rapidly, accumulating a strong user base. But now all this is gone. They don't stabilize, resting on plateau of horizontal graphs, but show decline, some stronger than others.

Should we be concerned? What can we do to fix this?

Many websites experience an initial fast growth since the date of their creation. After that there might be a decline in activity which is very normal.

The activity decreases because many questions have already been asked. The Q&A site enter into a different dynamics once they are filled with most of the basic questions.

While it is perfectly natural/expected for the site activity to decline it is important to keep an eye on the healthiness of the community. It is of course more difficult to keep the community vivid when the site is less active.

The decline in activity due to a decrease in potential questions, may have a negative effect on further activity in the community and create a negative spiral. There are many interaction effects that may play a role here.

A closer look at the graphs/data

Your graphs may be presented in a slightly different form using the following script: 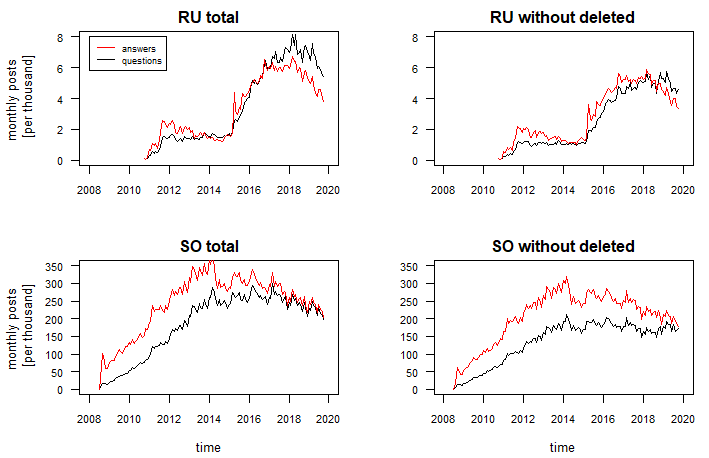 These images show the questions and answers without the deleted ones. Although there is still a decline in the recent years there is some nuance.

Of course, this is only a small nuance and there's still a decline. But these types of differentiation of the answers and questions may give a better idea of what is happening and in which corners the decline is occuring mostly (in deleted - low quality - questions). With this nuance the interpretation might be more strongly towards the idea that there is not so much a problem with the answering capacity and more with the quality of questions. This does correspond to the idea that 'many questions have already been asked'.

Most of the pretty fruits have already been picked. The sort of activity we see now are monkeys picking the low hanging fruit (I am one of them) and occasionally there might pass by a giraffe that is able to pick some fruits from the top of the tree. There is an increasingly number of fruit that ends up rotten on the floor and we do not have enough ants to clean that up. Recent developments, reducing moderators, are not helping with this scale problem.

My 2¢ based on personal experience: all of what Sextus Empiricus said (a QA site start having more views but less interaction over time) plus there is just a lot more info already around in English. Also a fair amount of IT workers worldwide understand English, at least at a technical level, and can at least read and write well enough or know how to spot Google Translation mistakes. The technology world is in English and that forces us to learn the language. These people might not be able to hold a conversation in English, but they sure know how to look for stuff on Google in English.

For example, I'm Brazilian and most of my colleagues first search in English for a solution to a problem. Some don't even consider searching in Portuguese unless it is something specific like tax calculation or document validation, or if they legit couldn't find the answer in English. It became natural to do so.

2501
Firing mods and forced relicensing: is Stack Exchange still interested in cooperating with the community?
77
I feel that lately the answers to my questions on Stack Exchange are low quality
46
Is It Time To Decentralize?
6
Q&A activity over the last month

10
Is answer upvoting declining - is the Electorate badge (partially) to blame?
10
Why are all the Stacks Overflows are svgified except pt.SO?
12
Why are some question-askers active on both English and Russian Stack Overflows?
173
A machine can flag spam automatically. Can it do better?
162
Writing.SE clamours for graduation
361
Let's take a look at the interaction between staff and the "power users" of the network
282
An open letter on the state of curation and moderation
120
Does Fram's ban on Wikipedia seem similar to recent events? What can Stack Exchange learn from it?
188
Testing three-vote close and reopen on 13 network sites