What happens to a pending suggested edit when a post is deleted?

I just had a suggested edit on a post that was deleted before that edit could be approved or rejected. What happens to a suggested edit in that case? Does it get removed from the queue? Does it count as accepted/rejected/something else automatically?

I don't see this interaction listed on How does deleting work? What can cause a post to be deleted, and what does that actually mean? What are the criteria for deletion?

And Can a question or an answer be deleted when it has a pending revision? comes very close to it (and is asked in a comment there) but never answers it.

It sits in the queue for the next reviewer, and I approved it.

Where do suggested edits go?

"Suggested edits are held in a peer review queue of a fixed size. If the queue fills up, no more edit suggestions will be allowed until the queue has some empty space."

Since you are under 2K reputation, see also:

Can I earn reputation?

"When a suggested edit is approved, the user who suggested it gets +2 reputation. The regular daily reputation cap applies, and the total cap for reputation gained via suggested edits is 1,000. The +2 is reversed if the edited post is ever deleted or if the final user to review one of your suggestions gets their account deleted.".

It's another approval to your credit, but no increase in reputation for your effort.

I just did a test with this.

What happens to a suggested edit in that case

It gets left in the review queue for the owner only and no-one else.

Does it count as accepted/rejected/something else automatically?

No, the user can still approve/reject the edit, if approved the edit will still be made even if the post is deleted. 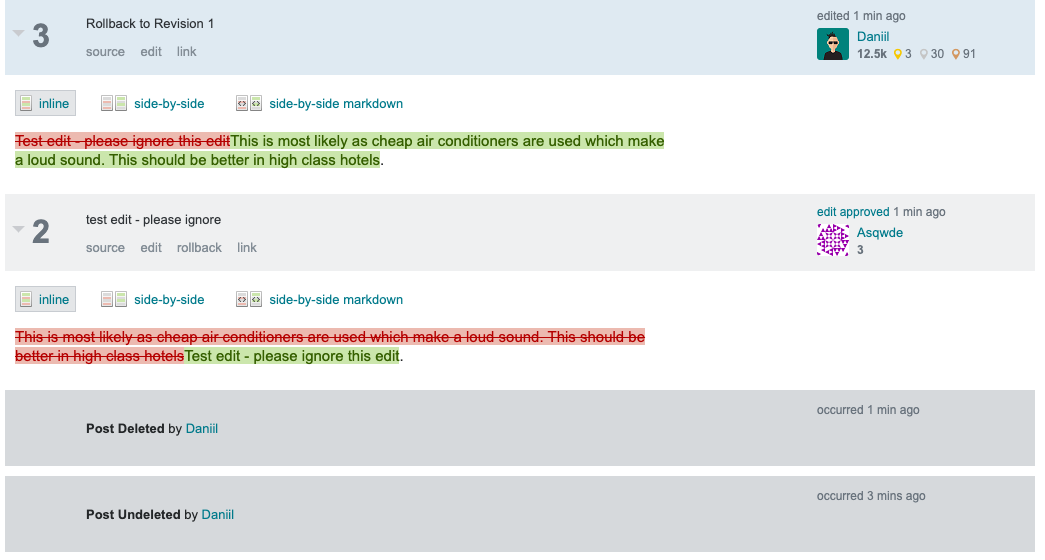 Not the answer you're looking for? Browse other questions tagged discussion suggested-edits deleted-posts .

509
How does deleting work? What can cause a post to be deleted, and what does that actually mean? What are the criteria for deletion?
303
How do suggested edits work?
8
Reject or approve suggested edits on deleted post?
8
Remove edits for deleted things from the review queue
1
Can a question or an answer be deleted when it has a pending revision?

509
How does deleting work? What can cause a post to be deleted, and what does that actually mean? What are the criteria for deletion?
303
How do suggested edits work?
166
Do we need a 'reject and improve' button?
419
Decision on rejected edits should be displayed as a notification to the editor
118
A way to "downvote" a suggested edit and affect both the edit suggester and reviewers
540
The current review system encourages fake reviews; some people upvote everything rather than actually fixing problems
75
Can "Thanks for your edit!" banner be linkified with the Suggested Edit Link?
728
Your answer is in another castle: when is an answer not an answer?
2507
Firing mods and forced relicensing: is Stack Exchange still interested in cooperating with the community?
8
Reject or approve suggested edits on deleted post?