Will I know how much reputation I gained from the change in question rep?

So question upvotes will now be worth 10 points and will be retroactively applied.

I know that the rep-cap will still apply when this takes place. I know that it will appear as if I always had this rep.

But, if I do not document how much rep I had on a particular site prior to the change taking place and compare it to my recalculated rep, is there a way to know how much rep I gained due to the new system?

I wrote a SEDE query which tries to measure this. It works as follows: it lists (almost*) all reputation events which are affected by the daily reputation limit: up- and downvotes received to both questions and answer, and approved suggested edits. It stores these both for the old rules (OldReputation) and the new rules (NewReputation). It then calculates how much reputation they would've given under the old rules:

and compares that with the same calculation for the new rules. When I run it for my own account on Meta Stack Exchange you see that I gained about 7000 reputation: 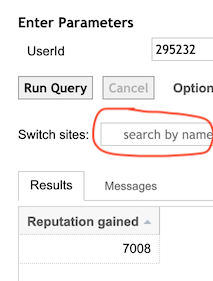 which is consistent with my own observation (I went from about 91k to about 98k that day). To run it for your own user account, use the site switcher to select the correct site, and enter your UserId which you can find in the URL of your profile page (or use my userscript to have it filled automatically).

There's a network-wide version of the SEDE query but it times out for users with a lot of posts like me.

*: downvotes given on answer cost 1 reputation and affect the daily reputation cap. If there's a day you didn't reach the cap under the old rules, but the new rules changed that, and you spent some reputation on downvoting answers that day, you might have gained a few more reputation points because of the rule change than this query indicates. Or a few points less perhaps, I'm not fully awake yet. Similarly, the exact sequence of down- and upvotes at the end of the UTC day might make a difference a SEDE query can't account for, because vote dates are truncated. That feature, and since the rule change went live gradually on November 13th, I've decided to count all votes on November 13th, even though they might have been cast after the rule change went live. There's another rule the query can't account for and which might influence the result in both ways: you retain reputation for deleted posts older than 60 days and a score of +3 or higher but they don't show up in SEDE.

Not without some effort on your side. It's a retroactive calculation that doesn't show up on the reputation page.

You can approximate by counting your question scores. It will be imprecise if you've got contested questions. In that case you'll need to look for the actual up votes. Depending how many mortarboard days you have there's the cap involved.

Since you are wondering now it's certainly easier to just take a snapshot of your user profile by noting down the rep.

19
Why is vote time missing in the SE data dump and SEDE?
14
Regarding the recalc in question rep increase what happens due to the cap?
32
How many sites changed their highest-rep user as a result of the recent question rep recalc?
24
Clarifying the criteria for when rep from deleted posts is maintained
11
Which users gained the most reputation by the "Rewarding the Question Askers" change?
4
How will retroactive reputation gain affect the user graph?
3
Is there anywhere I can see my old school reputation score?
-2
Weird increase in my reputation

78
Should the weight of question upvotes be reduced?
593
Exit strategies for "chameleon questions"
88
Should we cap reputation gained from questions at +2000?
536
Recent Reputation History Changes
533
The MIT License – Clarity on Using Code on Stack Overflow and Stack Exchange
423
Goodbye and thank you, Jaydles!
572
Change in roles for Jon Ericson (leaving SE)