Should the privilege levels be adapted after changing the question upvote weight? [duplicate]

Ask Question
Asked 2 months ago
Active 2 months ago
Viewed 184 times
5
This question already has answers here:
Regarding “rep inflation” from the recalculation and actions that require certain amounts of rep (5 answers)
How does “Reputation” work? (1 answer)
Closed 2 months ago.

After studying Why wasn't reputation loss on downvoted questions doubled as well? it seems like there is a "consensus like" understanding that the "official" goal of the "question weight change" is about encouraging users to ask questions, and that adapting the "downvote effect" accordingly would undermine that goal.

I can see that line of thought. Now I am wondering if there would be another way to reduce the negative side effect of increasing the upvote weight, without adapting the downvote weight.

For me, the biggest problem is that new users required 3 upvotes to get to upvote privileges before. Now it is just "half". So establishing "malicious upvote networks" is even simpler now.

A simple solution to that problem: the privilege system could be adapted. "Upvote privileges" could be increased from 15 to 30, or maybe 50.

Would that be a meaningful alternative?

Edit: I agree that the other question addressed part of this one, but the key part that I don't see there: that specific discussion "is getting to upvote privilege faster" a significant problem for the community?!

One thing to understand is that people don't tend use their privileges shortly after earning them. For instance, a small percentage of users to begin closing or reopening within the first month: 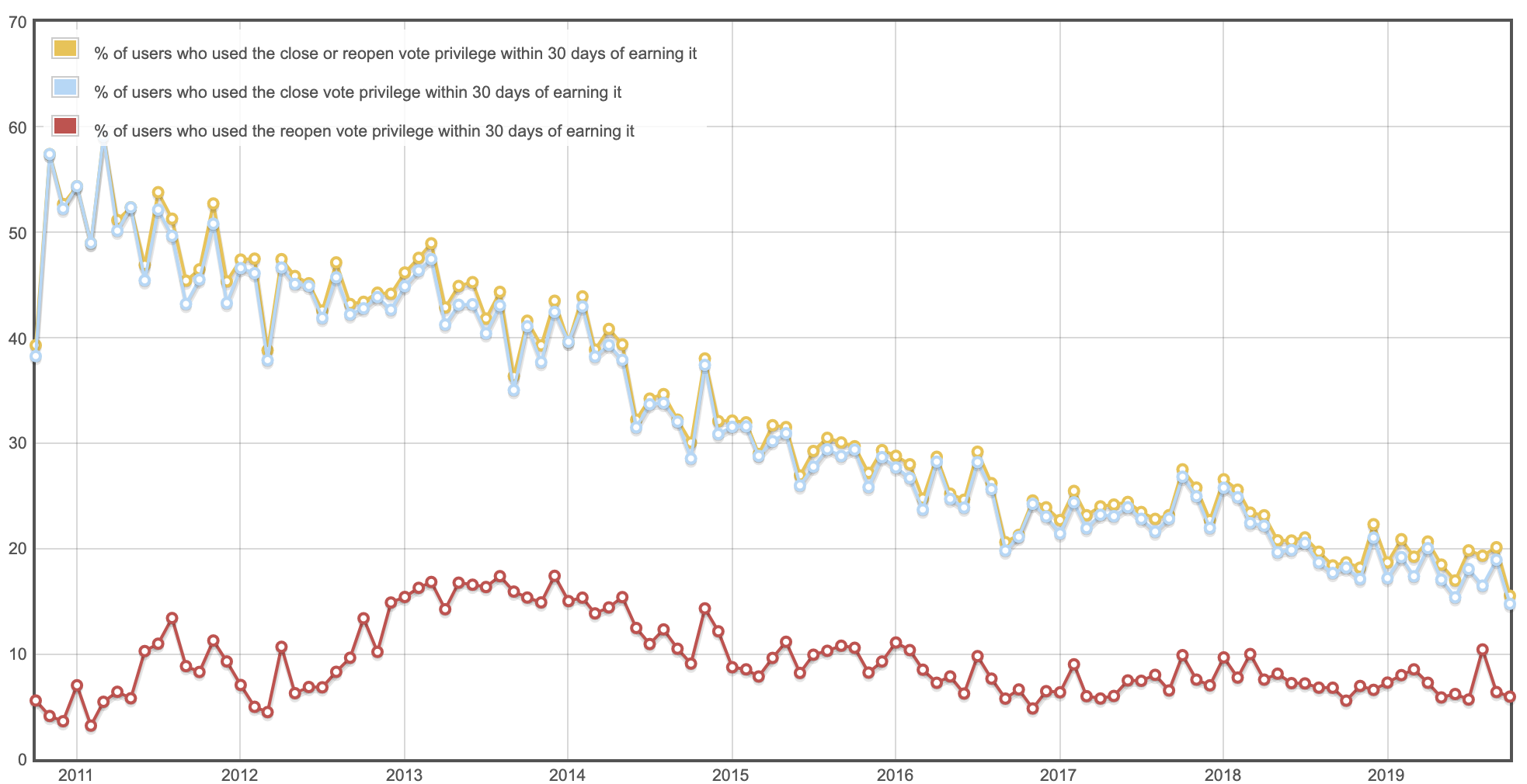 So even though ~12,000 earned that privilege overnight, we can expect somewhere in the neighborhood of 2,400 will actually use a close or reopen vote for the first time within the next 30 days. (And quite a few of those users were already close to earning it without the change in reputation. [Citation needed]) We'd like to see that rate go back up so that more people are participating in all aspects of the site (and not just asking). So we're working on ways to guide users better when they earn privileges so they can use them responsibly.

Since most privilege levels are not really tied to anything specific, the exact levels are more of a "this feels right" than any sort of real science or whatnot. However some of the early privileges have a very definite cadence when it comes to onboarding. Take the flagging privilege (15) which requires one of:

(Also, we're ignoring downvotes and spam/offensive flags, which might require more of the above.)

The idea is that you need to show some understanding of how the site works before you start flagging things. The system determines (usually confirmed by at least one existing member of the community) that participants have shown sufficient knowledge of the system by counting positive actions. Notice there's not a huge difference between the previous system and the current system. There's just one question upvote difference when it comes to flagging. Still, we might start noticing a greater percentage of declined flags as a result of the change. That produces a lot of unnecessary work for moderators and is something to avoid.

Now changing privilege levels is not the only tool we have. As I mentioned before, there's a lot of room for better guidance. We're watching activity on the site over the next month or so. If there are problems that could be corrected by changing privilege thresholds, that's certainly an option to consider.

IMHO, yes, at least for upvoting, for the reasons I stated here:

Simply increasing question reputation as stated will make it easier for sockpuppets/voting rings to start. It's rather easier to copy a nice looking programming question from Quora / Reddit and post it on Stack Overflow (maybe changing a few words to avoid the simplest plagiarism checks) and after two upvotes (instead of three) you'll already be able to upvote yourself. Since those votes can come from the ring themselves, their growth rate will be more than doubled, it seems. This will make it harder for regular users, ♦ moderators and Community Managers to detect and take care of them.

For those of you that are getting new privileges: we ask you to take the responsibility reverently. You are the question experts. You are the people that can identify a question that is struggling and you know how hard it can be to on the other side of that keyboard. Thank you in advance for gently coaching question askers through their experience.

From this, I can conclude that SE has already considered the case of receiving new privileges.

And if SE Inc. does not want to adapt privileges, then the community is powerless against it.

Not the answer you're looking for? Browse other questions tagged discussion privileges up-votes .

550
How does “Reputation” work?
26
Regarding “rep inflation” from the recalculation and actions that require certain amounts of rep
91
Should the weight of question upvotes be increased network-wide?
90
Propose a privilege to sit in the 500 reputation mark
59
Why wasn't reputation loss on downvoted questions doubled as well?
118
What are the reputation requirements for privileges on sites, and how do they differ per site?

219
Should the weight of downvotes be increased?
85
Anonymous user feedback now in testing
25
Make the “Close questions” Privilege FAQ mention that moderators don't do the dirty job of closing for you
121
Prevent questions on Hot List from being upvoted by casual visitors (only rep is from association bonus)
147
What privilege should 30k users get?
322
Toward a philosophy of Chat
402
Can a machine be taught to flag spam automatically?
819
Net Neutrality and Stack Overflow / Stack Exchange