Self-learner badge has been incorrectly awarded

In the famous Why is SE removing links and community ads about legal issues? question by Juan M. he has been awarded the Self-Learner badge with his infamous answer.

I guess that things are being manually touched somewhere (SQL? I hope not) and this is a bug.

The question and answer were originally posted by Juan M, and during the first few minutes they were live they both had a positive score (+5 or so, if I recall correctly). If you expand the Nov 14 entry on his reputation page, you can see the first few votes were mostly positive: 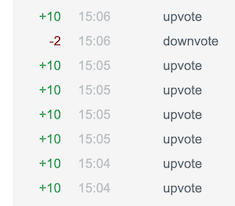 The Q&A then qualified for the badge, so it was rightly awarded; status-bydesign.

As the question mentions,

[This post was originally posted by Juan M but ownership was changed with a post-dissociation tool so that the accepted answer would be pinned to the top.]

so that's where your confusion comes from. Yes, there was some trickery involved, but the system works as designed.

Not the answer you're looking for? Browse other questions tagged bug status-bydesign badges self-answer .

134
Find out which question/answer awarded you the badge
6
How to earn the Self Learner badge?
75
Remove the 25% requirement from the "Unsung Hero" gold badge
6
New badge notifications targets wrong post for "Nice Answer"
47
Editing the "Self-Learner" Badge Description
78
Add silver and gold versions for the Self-Learner badge
24
Was my answer really twice as good? (doubled "Good Answer" badge)