Can my answer about current events be undeleted?

In mid-November, SE staff posted a Q&A style announcement "Why is SE removing links and community ads about legal issues?" here on meta. To my knowledge, this was the first "official" post from SE staff that referenced Monica by name since she the situation of her removal as moderator on the network began. Given that, and the ensuing company's stonewalling of Ms. Cellio, I posted this apt response, which was fairly well-received (with over 70 upvotes and about a 10:1 upvote-to-downvote ratio). Several days later my post was removed by a moderator (not a CM) and I'm struggling to conclude the rationale under which this action was taken, or even that its removal is justified.

EDIT: Due to lack of info provided by the system, this originally appeared to me as a deletion by the mod as sole judge and jury, and executioner. But Glorfindel has enlightened me to the fact that there was a jury of peers. Had I had that info I would have skipped this post. Thanks all for feedback.

It's one of those answers that is pithy, a bit snarky, but it hits the exact center of the unrest on Meta.SE currently.

It was likely deleted due to the implicit snarkiness in the answer (digging into the fact that SE Inc., is doing everything possible to not mention the 'M' word).

Without being able to see the answer's comments I have no idea if a large number of deleted comments contributed to this; if it was flagged by people on Meta, or if staff indicated it should be deleted.

This is another reason why having community moderation on Meta.SE in the current climate is a bad idea. Whether or not the Community Moderators want this to be true, they're now seen as allied against the upset community.

Here is your answer: 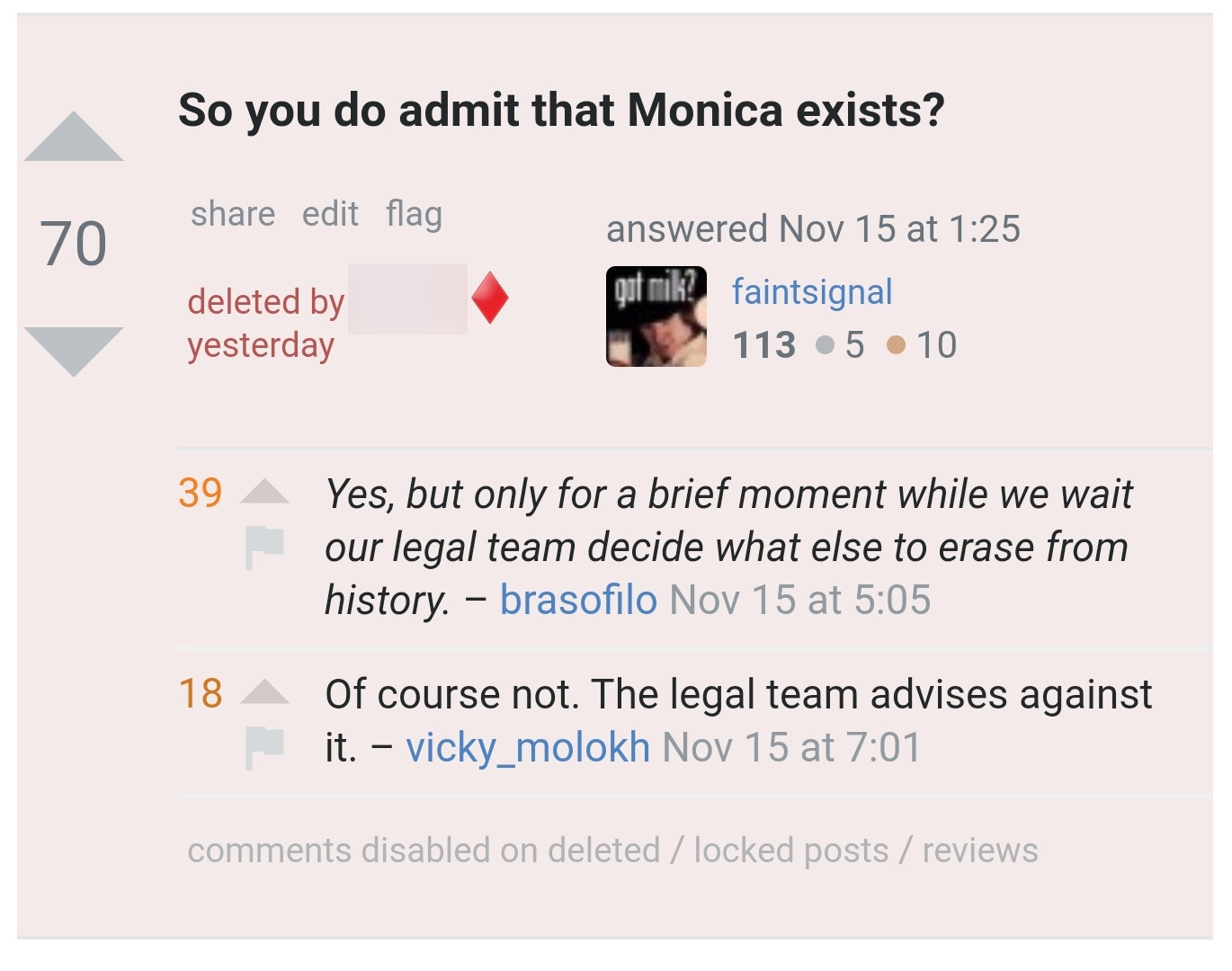 As you indicated, you posted a response to that question, which is different from an answer:

Read the question carefully. What, specifically, is the question asking for? Make sure your answer provides that – or a viable alternative. The answer can be “don’t do that”, but it should also include “try this instead”. Any answer that gets the asker going in the right direction is helpful, but do try to mention any limitations, assumptions or simplifications in your answer. Brevity is acceptable, but fuller explanations are better.

Meta Stack Exchange is full of exceptions to the rules set out in the Help Center, but most one-liners are still frowned upon.

The post was flagged as low quality (probably even automatically by the system), and it wasn't just a ♦ moderator who deleted that post; six other users (including me) chose to do so; see the review. No stonewalling/censoring here; two of those users even changed their display name to support Monica. Because it had a positive score, it wasn't automatically deleted, but a custom ♦ moderator flag was raised instead: see Is “recommend deletion” secretly a vote to delete?

To my knowledge, this was the first "official" post from SE staff that referenced Monica by name since she the situation of her removal as moderator on the network began.

That could be (I've checked some well-viewed posts and those do say 'a moderator'), but was there any doubt about whether they had any doubts about Monica's existence? Monica's first post about the situation got a response by Stack Exchange staff on the same day.

In such a case, if you think the action was not fair, did you try to raise a custom flag to know why it was taken? And after that, if you do not get an answer, you can use the contact form to contact the CM's team/support to know the why.

Usually, moderators would leave a message on the answer before they erase it, to let the answerer and >10kers know why they decided to delete it.

Its worth remembering, we need to make a whole load of difficult decisions at this point, even if its occasionally "Darn it, SE can shovel their own manure"

Practically - there's a very fine line between directed, constructive critique, and rabble rousing. This was pretty much not much more than an attempt to elicit emotion. It wasn't really an answer or making a point. It probably made up for what it lacked in polysyllabic speech in sheer decibelic screech. Practically? It was never a good answer.

So - pretty much, outside "you are bad and you should feel bad" what was the practical goal of this post? If a member of staff read it, what was the message it was aimed to do?

It was pretty much a oneliner (and I'm surprised it wasn't auto converted to a comment by the system).

This is another reason why having community moderation on Meta.SE in the current climate is a bad idea. Whether or not the Community Moderators want this to be true, they're now seen as allied against the upset community.

Now, this is extremely unfair.As far as possible we've tried our best to be neutral in trying times. I guess we signed up for this - (and heck, I tried quitting once, and I felt like things got worse, not better). I know some folks want us to quit in protest but its a difficult place between expressing our dissatisfaction with how things have happened (and I do that a fair bit), and letting the place fall apart due to sheer spite.

None of these decisions are easy. Someone's gotta make em (and sometimes we need to think hard about them - in different times, that might have been deleted quicker, not slower).

In spite of getting pulled in multiple ways - not having community moderation literally means losing another voice we have here. We try to be accountable for our actions (within reason) and put in a reasonable amount of care and emotional energy into trying to handle things here. We don't know what new flavour of drama tomorrow holds (we almost always find out things at around the same time as other mods!)

I believe some folks feel this place should primarily be a vent in these times. We can't lose track that this is also a space for constructive communication. While we often try to moderate lightly, when emotions are high, we do need to do the necessary. We're probably going to get pressured by folks who disagree, but at the end of the day, we do what we got to.

Not the answer you're looking for? Browse other questions tagged discussion meta deleted-answers .

2510
Firing mods and forced relicensing: is Stack Exchange still interested in cooperating with the community?
247
Why is SE removing links and community ads about a legal fund campaign?
38
Is "recommend deletion" secretly a vote to delete?