There is no nuance to the 'Frustration Feedback' bar chart, in the loop blog

The first thing that struck me about the recent blog post was this lop-sided bar chart. 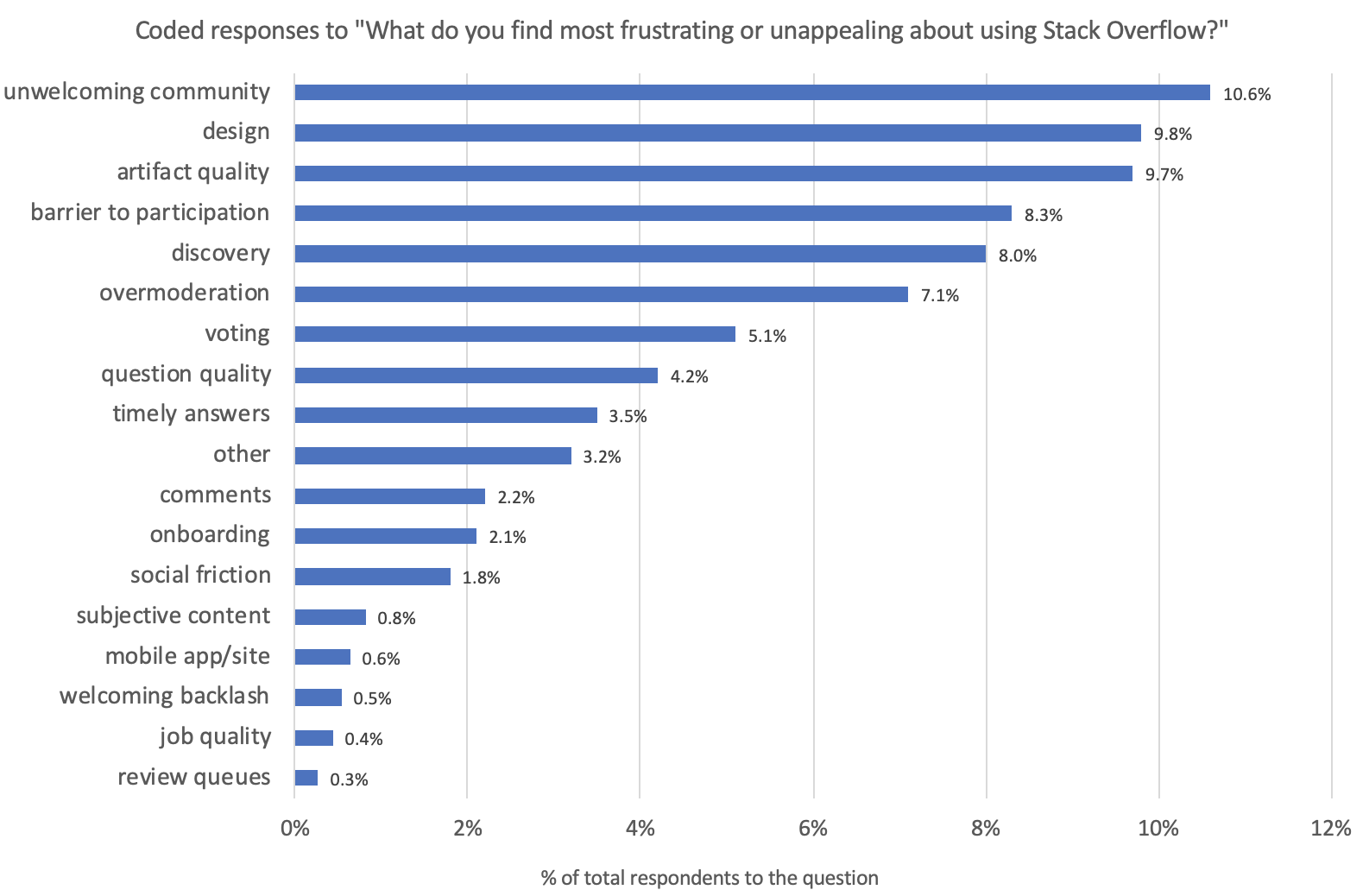 I didn't think it would be productive to post a comment on it, so I'm airing my frustrations with this bar chart.

This only measures the number of complaints, not the impact resolving them would have.

There's no nuance that the bottom item 'Review Queues' could have a significantly larger impact on the top item 'Unwelcoming Community', despite one being roughly 30x as prominent.

Has StackOverflow made any comment on this? Is it paranoia that this was deliberately stated this way, to show that this isn't an issue?

I'm afraid I can't answer your specific questions, but I think it's on-topic to point out some more fundamental problems with the chart.

The chart doesn't meet even the most basic requirements for any presentation of survey data:

Many other problems are mentioned in @curious's excellent answer.

The blog post by Sara Chipps and Juan Garza is silent on all of these questions, and (as far as I can tell) it doesn't provide links to sources that could answer them.

In a nutshell: In its current form, the chart is useless. It's pseudo-science.

Allow me to piggyback on your question since I wanted to ask about this. For the record, I'm not saying I would have done better because qualitative research is harder than it looks, but I would also like some answers to better be able to make sense of that chart. I apologize for the lack of citations, this is off the top of my head. Feel free to comment if I got something wrong.

Some questions and comments:

Inductive coding means that you build codes from the data, and eventually draw themes from what these to try to make sense of what's going on. When deductive coding is used, the research starts with preset categories and fits the data into boxes. This can be helpful if you want to make a comparison with something else or you are using a framework, and probably more but it's not something I've used often. Which method was used there?

It seems plausible to think that the data was coded by hand, from Yaakov's answer here (and kuddos to Yaakov for keeping communication open with Meta):

For a number of months we have been doing this by hand (yes, a few people have looked at many thousands of these responses, and assigned them to one of many dozens of categories).

(Note, it's not clear here if this applies to the Site Satisfaction Survey and if machine learning was used on this data.)

I'm not sure how many people is "a few" and if they coded the data in way they could assess reliability (by coding a single item multiple times and checking for agreement), or if they just needed a few people because there was a lot of data. Was inter-rater reliability taken into account, and if so, how?

Themes are supposed to give a sense of the data by capturing the underlying idea behind it. Often, themes are an actual sentence. Currently, the themes are really vague. What does it mean to be frustrated with voting? Is one frustrated about downvotes? That they are anonymous? The lack of votes? The accumulation of votes through time or from HNQ? It's fine to categorize information but it should be looked into further to better understand what exactly is going on and point to the actual problems, then you can get to the essence of things.

What's not being said

Another important feature of qualitative research is trying to make sense of what's not being said. What's missing from the bar chart? There is no interpretation included in the post as far as I'm aware.

According to the blog post, the data comes from a representative sample of users. I would like more explanations about the sampling method. What characteristics were used? Location? Age? Reputation? Something else? Is the sample self-selecting? As in, one may be more likely to answer a survey if they want to voice a dissatisfaction?

Bunching all responses in the chart regardless of user background

Given how privileges scale, I highly doubt that new users find review queues annoying. So it seems all responses are bunched together. It's critical to gather data from new users, but it probably should be nuanced differently than the data collected from intermediary, experienced users, moderators, etc.

To illustrate my point, the director of public Q&A wrote a great article about how it feels to get ganged up on. That it's possible each individual comment is not being rude but the sheer amount of disagreement is overwhelming. A sturdier approach would be to categorize people from what we know of their experience of the site and compare the responses across categories. Can we make better sense of some responses, such as "unwelcoming community" with other data, research, and experiences? (e.g. literature about being ganged up on? Flags for unkind, rude behavior? Rude comments classification? Interviews?)

Self reports were not coded taking potential bias into account. It's not "I felt unwelcome, put on the spot, like I didn't belong", it's not coded as unwelcoming atmosphere, or that there is a divide between users that needs to be fixed. Why not take some time to look at that data again and try to get to the essence of it so we can all work together towards a common goal?

Overall, both anonymous and registered users are highly satisfied with Stack Overflow and tell us that their favorite things about our community include finding solutions to their problems, vast access to information, and the knowledgeable people who participate.

Would the company mind giving the community a bone there? Was the positive data coded? Spending some time analyzing what the company, its volunteers, and contributors are doing properly can also be worthwhile.

I agree; the chart lacks essential "properties". That bar chart is one of these over-simplified "things" that managers love so much. Why? Because it allows you to project into it whatever you want.

The problem is: without knowing exactly in which context the underlying data was compiled, what questions were asked (exactly, the slightest variations in wording can lead to different outcomes), ... Without knowing that, it is hard to derive conclusions from that bar chart. Or to identify invalid decisions, that aren't supported by the underlying data.

To me, it is not even clear whether that bar chart is derived from the "well-known" yearly SO developer survey, or if it solely based on that not-yet-public Site Satisfaction Survey. Or a mix of both.

Who can tell us for example what the big "unwelcoming" line is really about? As I wrote in a comment, one could go so far and say: "looking at this chart, the community members think that the community itself isn't welcomed". (probably true, or who around here feels "welcomed" by SE Inc. lately).

And sure, then artifact quality is mentioned. But is that coming from newbies who find some answers to technical/complicated? Or from power users who worry about "do my homework" questions and "here, let me answer the Java null pointer exception thing for the one-million-th time" answers? Or from moderators who really lack tooling support?

We don't know. So we would need to trust SE Inc. about how data was collected, and how earnest the interpretation took place. Or if something else happened: that some higher-up manager gave out a vision, and then the data scientists at SE Inc. were tasked to find data that could be used to support that vision.

And after working for 20 years in a large US-based company, I don't think that happened by accident. Strange, how SE Inc. with its 300+ employees manages to repeat the well-known mistakes of those "legacy" companies with their out-of-touch vice presidents and senior executives.

Aren't you maybe expecting too much from this chart?

Could they have added more details on the methodology? Sure. Could they have provided a dump of the original data set? Sure. Should this sway people who are willing to trust data but unwilling to trust the company? Absolutely not. All this chart is doing is repeating what they already said, except this time in bars and axes instead of words.

We’ve learned a lot from you, and we work to distill your feedback into themes. One theme we examine is what you find most frustrating about using Stack Overflow.
—Introducing “The Loop”: A Foundation in Listening

They made claims about what "you" (i.e. everyone who took the survey) found most frustrating, and explained how they analysed the survey data to come to those conclusions. And then they showed you a chart of the relevant results because charts make everything more sciencey.

If they were actually looking for either of those things they wouldn't (or at least shouldn't) be using this chart to do that because that's not what it's for.

Not the answer you're looking for? Browse other questions tagged discussion blog the-loop .

25
How will Stack Exchange get the resources to track and handle all the new feedback gathered by The Loop?

188
Using the Stack engine for the blog – a long-term idea for maintaining a healthy blogging culture
137
The "loop" has arrived. What does the community think about it?
194
Why is "The Loop" survey asking about race, age, and gender?
44
Will comments on "The Loop" blog posting be shared?
143
Please consider gathering Meta feedback before the "ship" stage
145
Who is the intended audience for the Stack Overflow blog?
30
Feedback for The Loop: March 2020
29
Feedback for The Loop - June 2020: Defining the Stack Community
145
A deeper dive into the May 2019 security incident: blog post feedback