How were the racial backgrounds used by The Loop and previous surveys designed?

In the current version of "The Loop", the following question is asked:

Similar questions have been used in past surveys, for example this 2017 survey mentioned the following, referred to as ethnicities in the writeup as opposed to racial backgrounds:

The groups mentioned above are somewhat different to those used by the US census, the country in which the company is based. It mentions the following (copied from the list of 2000, which apparently hasn't changed for 2010):

It also asks about the ethnicity "Hispanic or Latino".

There's a number of differences between what the company does, and what the US census bureau does. The survey groups "American Indian and Alaskan Native" with "Native Hawaiian and Other Pacific Islander". It splits the "Asian" category up. It treats "Hispanic or Latino/Latina" as racial background rather than a separate attribute. Most interestingly for me, it groups members of "Indigenous Australian" with "Native American" and "Pacific Islander".

Update In the 2020 developer survey, the following option was given, to a question which didn't use the word "racial" or "ethnicity":

Indigenous (such as Native American, Pacific Islander, Or Indigenous Australian)

This would suggest that in 2019, the designers of The Loop thought back then that the three groups had that characteristic in common.

Unfortunately I need to be a bit blunt since they were poorly designed.1 While it is reasonable to assume that the cultural background of a Stack Overflow (SO) user would result in different perceptions in the use of the website, asking about racial background is a poor way to go about getting that information.

First, there is the obvious problem that asking about "racial background" is a culturally sensitive question internationally. While some of the users of SO are from the United States, the international community is the majority of the user base and needs to be considered. This is fairly easy to correct with better phrasing though.

The lists of independent variables are usually developed through several sources (ex., prior surveys, literature reviews, brainstorming) and may be narrowed down a bit due to instrument constraints (ex., paper surveys have print costs) or due to overlap on the list. In this case it appears that "The Loop" is using "racial background" as a proxy for the cultural background, but does so in a way that loses a lot of statistical power. For example, "East Asia" is a very big place and includes countries that have a lot of software developers (ex., China, Japan, South Korea). Lumping all of these into one bin presumes there is no significant difference between the countries. This point is a debatable point, and given my familiarity with the region I would argue it's a bad assumption to make.

Q1. In what country do you currently reside? [List of options]

IF [COUNTRY] = [UNITED STATES] THEN Q1.1 What ethnicity do you identify with? [List of options]

Q2. What is your level of proficiency with English? [Likert scale]

This approach captures the same data as the original question in "The Loop" survey since the country selected for Q1 can then be binned into a derived variable for one set of statistical tests. However, by looking at the role that the respondent's country and English proficiency plays it offers a lot more information for analysis. Depending on the results of the analysis a follow-up survey could then be developed that is a bit more targeted.

However, the trick to all of this is that you need to have some hypothesis in mind for the role that the independent variable plays on the dependent variable. During my training, development of causal diagrams played a major role since that in turn acted as the outline for the statistical analysis you would do with the results. It was always interesting to see what independent variables were not statistically significant and it wasn't uncommon to find that you initial hypothesis might be wrong.

I think that part of the survey was implemented following Hanlon's razor:

"Never attribute to malice that which can be adequately explained by stupidity."

But let's better call it incompetence, as we are professionals here.

To me, the only place in the world where my "race" matters is "US customs and immigration" when traveling.

And that is the thing: asking such a question isn't just "sensitive internationally". No kidding: if SE Inc. would be a Germany company, and they had pulled that survey, they would have made it the national stage, and they would have seen a 2 week shit storm. Minimum. They wouldn't have gotten away without the CEO publicly apologizing for being so insensitive, unwelcoming and racist.

Given the fact that SE Inc. over and over emphasises a global community, and put major efforts in being "welcoming", that part of the survey simply indicates one thing: cluelessness.

Regarding "how it happened", what we know is:

But I fear, that is the way how things work now: SE Inc. has highly paid professionals defining the new path forward. And because they are soooo good at it, they can't get anything wrong, therefore there is no need to listen to us upfront.

Of course. Because such attempts to group are always built on pseudo-biological theory.

Attempting to categorise individual humans by race is a highly dubious pseudo-science which first sought acceptance in the 16th century's Age of Exploration (for reasons we can readily guess) and which led to some truly horrific theories and practices in the 17th, 18th, 19th and 20th centuries.

As a global population we would all do well to regard the proposal that homo sapiens is divided into races with the withering scepticism such a flawed notion merits.

The groups mentioned above are somewhat different to those used by the US census, the country in which the company is based.

The blog: Introducing “The Loop”: A Foundation in Listening points to: "Developer Survey Results 2019" which points to: "State of the Stack 2019: A Year in Review", which says they use the Rooney Rule (as does Pinterest, Facebook, Patreon and Checkr, etc.,) during hiring.

While this isn’t where we want to be, it represents substantial growth over the past few years. In 2018, we also concluded a third-party compensation review to address any gender or racial pay gaps, and implemented a Rooney Rule for tech and leadership hiring to ensure we continue to address the gaps in our hiring.".

Whether hiring practices extend to every possible interaction isn't specified but fair application of the rule would ensure that population demographic groups and Stack Exchange/Overflow demographic groups are held at approximately equal levels. Were there any shortcoming it ought to be investigated. With the Rooney Rule in effect and that blog article co-authored by two persons, subject to review (internal and external), one expects that efforts are being made to equalize representation and treatment of everyone.

That isn't without its difficulties. The manner in which it is split needs to be categorically factorable. Categorization, even within the US Census, has been a fluid and open question, which is often reanalyzed.

On page 4 of "American Anthropological Association Response to OMB Directive 15: Race and Ethnic Standards for Federal Statistics and Administrative Reporting" (Sept 1997) an analysis of how categories are derived for the US Census was presented:

"The American Anthropological Association recognizes that classical racial terms may be useful for many people who prefer to use proudly such terms about themselves. The Association wishes to stress that if biological information is not the objective, biological-sounding terms add nothing to the precision, rigor, or factual basis of information being collected to characterize the identities of the American population. In that sense, phasing out the term "race," to be replaced with more correct terms related to ethnicity, such as "ethnic origins," would be less prone to misunderstanding.

Social and Cultural Aspects of "Race" and "Ethnicity"

Race and ethnicity both represent social or cultural constructs for categorizing people based on perceived differences in biology (physical appearance) and behavior. Although popular connotations of race tend to be associated with biology and those of ethnicity with culture, the two concepts are not clearly distinct from one another.

While diverse definitions exist, ethnicity may be defined as the identification with population groups characterized by common ancestry, language and custom. Because of common origins and intermarriage, ethnic groups often share physical characteristics which also then become a part of their identification--by themselves and/or by others. However, populations with similar physical appearance may have different ethnic identities, and populations with different physical appearances may have a common ethnic identity.

Let's see what happens when we take organizations that we presume to be fair and honest and ask about their demographics, does this look even? 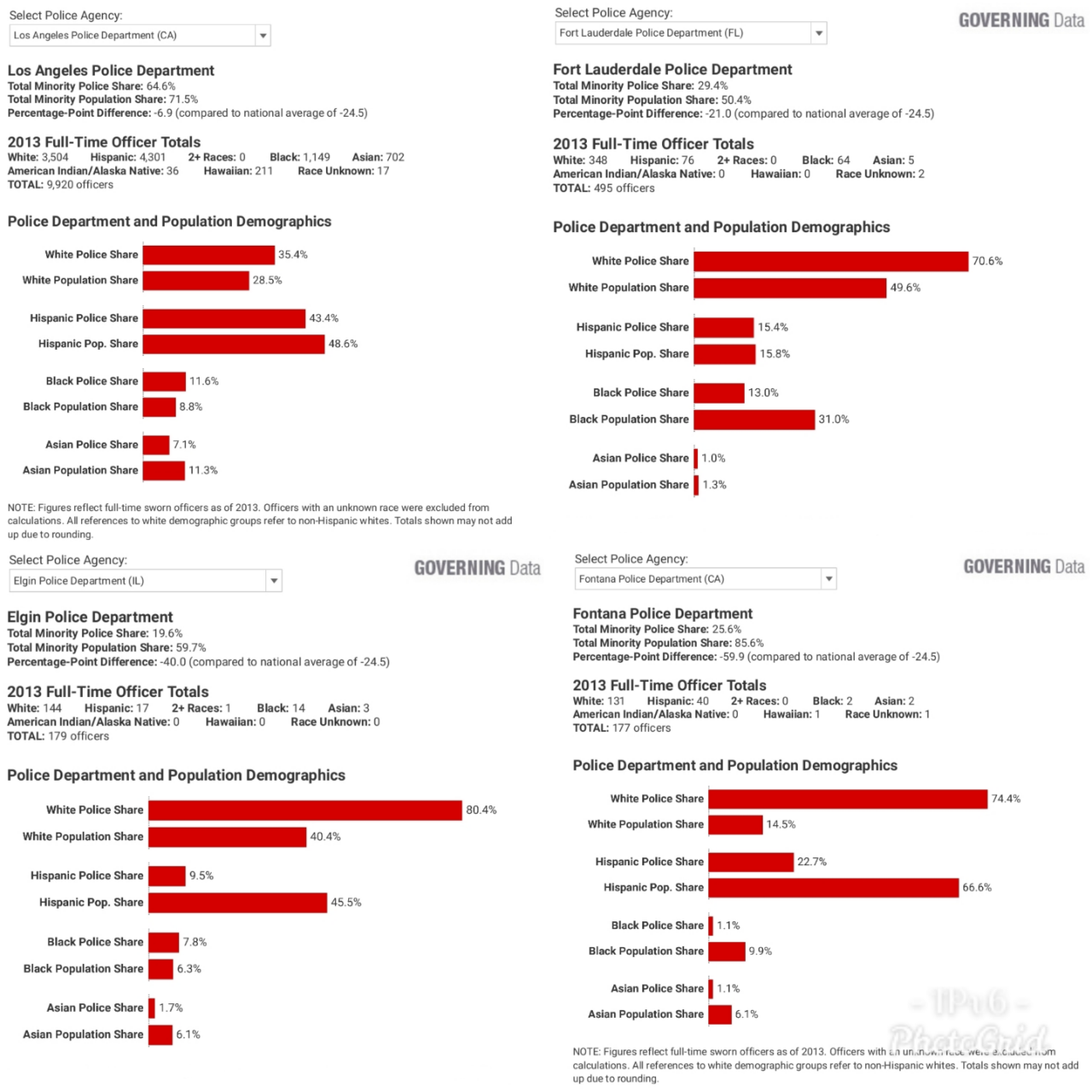 Not the answer you're looking for? Browse other questions tagged discussion stack-overflow-developer-survey the-loop .

139
The "loop" has arrived. What does the community think about it?
14
Conduct a [survey] about tags on Meta

247
Why were the Code of Conduct changes received so negatively, and what can / could have been done to change that?
40
Why is the "Loop" survey restricted to those 18 and above?
196
Why is "The Loop" survey asking about race, age, and gender?
25
How will Stack Exchange get the resources to track and handle all the new feedback gathered by The Loop?
45
Is "The Loop" covered by SO's Privacy and GDPR policies?
22
How can the answers given in the Loop be analysed in a meaningful way?
16
This month’s “The Loop” is all about how we utilize feedback