Has the October 2019 moderator reinstatement process actually been used?

In October 2019, a new process for the reinstatement of former moderators was released.

To be clear, this is not a protest question in any way, nor am I proposing that the process be changed. I'm simply curious as to how the new process is working out in real life. If outcome statistics are available (e.g. 1/3 of 18 former moderators who completed the process were reinstated, with the most common reason for refusal being having been involved in serial voting in the past), that would be helpful, but I understand if there are things that cannot be disclosed for privacy purposes.

In response to Magisch and Stormblessed's comments, I'm asking specifically about the full, formal moderator reinstatement process in the linked document. Former moderators who either refused to engage with the process and have not been reinstated, or who were reinstated without having to go through the full process as defined (i.e. by exception) do not count.

Journeyman Geek was among the first moderators to give up a diamond when the latest... incident... happened. He asked Stack to remove his Meta.SE diamond, and they obliged immediately.
Fast forward a bit, and he decided that he'd be able to help more with his diamond back. So... he requested it back.

I happen to know that at the very least, it took longer than he had wanted, and that the other remaining moderators of the site had to sign off on his reinstatement, which sounds suspiciously like the reinstatement process. :) 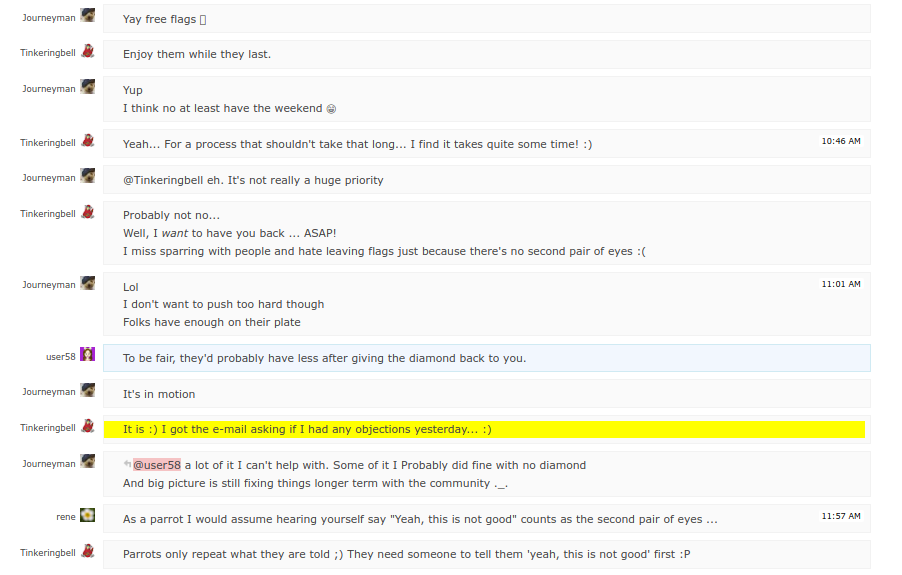 Tavern on the Meta, October 27

So, yes, the reinstatement process has been used at least once, with the moderator in question winding up being reinstated fully.

Not the answer you're looking for? Browse other questions tagged support moderators company .

2377
Firing mods and forced relicensing: is Stack Exchange still interested in cooperating with the community?
92
Please don't bring The Loop to per-site metas
37
What is the process for a moderator to request reinstatement or appeal a removal?
12
Have the October 2019 moderator removal procedures been used?

186
Allow ex-moderators to opt-in to having a mark on their profile indicating they were a moderator
2377
Firing mods and forced relicensing: is Stack Exchange still interested in cooperating with the community?
191
A general call for increased transparency from Stack Exchange, Incꓸ
80
Can a fired moderator be elected as a moderator?
2030
Stack Overflow is doing me ongoing harm; it's time to fix it!
19
What is the process regarding moderator inactivity removals?
12
Have the October 2019 moderator removal procedures been used?
70
Why is the Moderator Council's role in the new reinstatement process such weak sauce?