Is there a way to determine how/why when one of my posts on a network site suddenly starts getting unusual traction?

So one of my answers on a network site has suddenly attracted a few upvotes within a short span of time (within hours). This is an answer that I posted over a year ago, where it received most of its upvotes around a couple days of posting, then lay dormant for over a year.

While it can merely be a coincidence, my limited understanding tells me there's a possibility that caused the event.

I have at times experienced sudden upvotes on some of my posts that referred a topic that's currently in the news. But I couldn't comprehend anything similar in this case.

So my question is simply out of curiosity (and with a desire to learn more), as to whether it's possible to, and if yes, how to determine the reason which caused sudden activity on one of my posts?

If it helps, I have access to the site analytics for the network site in question.

There is no general method for this, but here are some guidelines to check:

In addition to the excellent points described in Glorfindel's answer, one other thing to check is the question's timeline.

This is a chronological timeline of everything that happened on a question, including

all based on when they happened in chronological order.

Note: the "post ID" is the number shown after the "questions/" part of the question's URL.

Among the more than 500 answers I've given so far on Math SE, the top 2, in terms of score, were due to at least some extent from special events listed in their timelines. As mentioned in Rob's comment to Glorfindel's answer, the post may have become a HNQ (i.e., Hot Network Question). Depending on how potentially interesting the question is, how long it's on the HNQ list, etc., it may get a lot of views, with a generally corresponding increase in votes for the question and answers. Here is the timeline of a question where my answer got many more up votes (32 in total) than I would have normally expected it to (I circled the pertinent part in red): 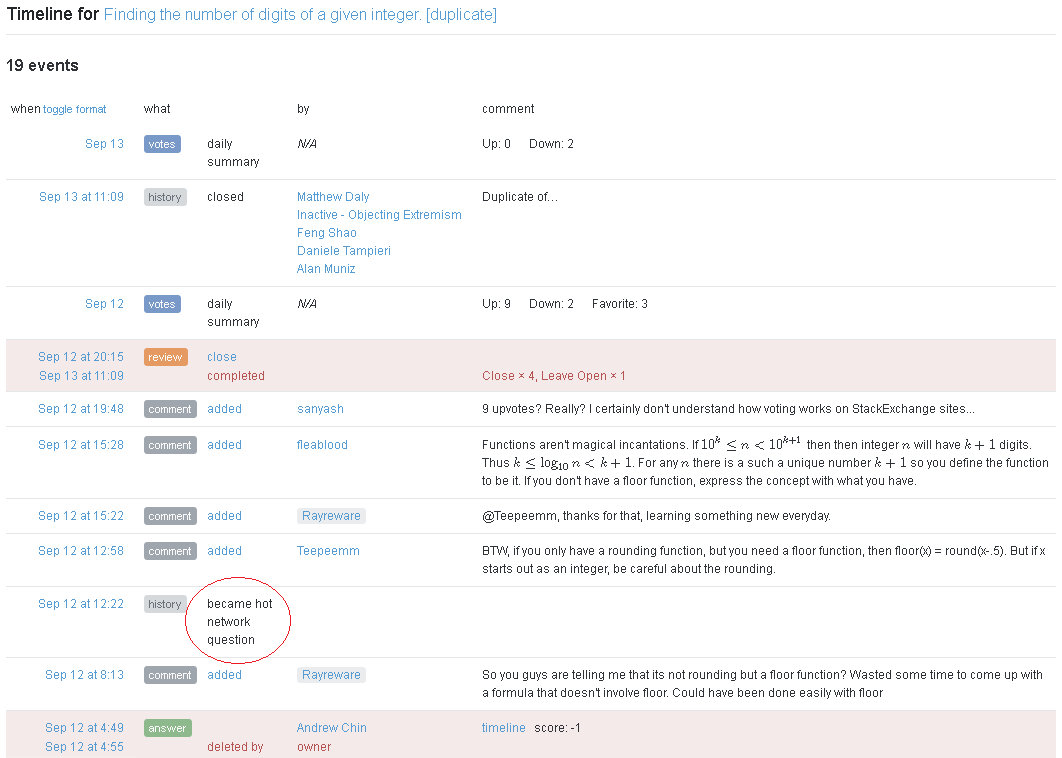 Although this happened just about 3 months ago, so it's definitely not on the HNQ now, there's no indication of when the question stopped being on that list. Also, there's at least one other math question I've seen on the HNQ list which I've answered & got a few more votes than I would have otherwise expected. One thing to note is that, I believe since many sites don't support MathJax, any question using MathJax in its title (e.g., like the other question I discuss below) will generally never be on the HNQ list.

Next, here is the timeline for the other question I mentioned: 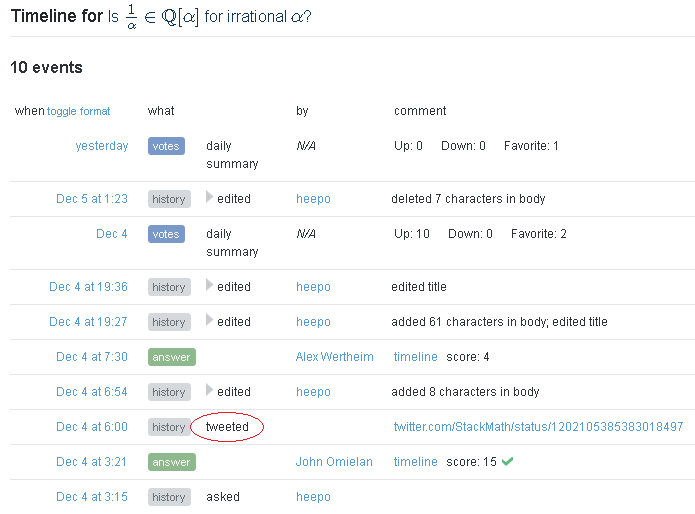 Note most of my answers on math SE get at most 4 or 5 up votes, so these 2 answers are definitely not normal, or even what I consider to be among my best answers. Also, these 2 events, i.e., being on the HNQ and being tweeted, would normally happen quite soon after a question is posted, so it won't likely apply if you see something happening after a year or so. Regardless, if there are no other fairly obvious reasons, it's still worthwhile to check the timeline for the possibility of the question being on the HNQ, being tweeted, or something else occurring & being listed which may have caused the post to suddenly get at lot more views and votes.

Not the answer you're looking for? Browse other questions tagged support voting bump popularity old-posts .

153
Add a link to the timeline of a post
67
Feedback Request: New Timeline Question View
55
What events trigger an inbox notification?
66
Make existing timeline icon of a post available to anybody and not only to mods
2
Why did my question get a ton of views in 2 days?
11
Is it possible to get info about where my link was published and where the traffic comes from?
8
Is there a way to tell if a question has had a sudden increase in page views?