Do you actually lose rep if your edit was rolled back by the author?

I've found this post, where an SE employee stated that:

a rollback does not cause a reversal of the reputation gained

But check this question. 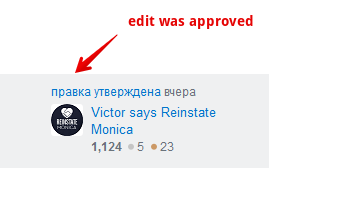 Was something changed in the logic?

A normal rollback won't cause you to lose the 2 reputation.

But when the post author overrides the edit approval, this causes a rollback and the 2 reputation will be lost, since the suggested edit isn't 'approved' anymore and that is what gives you the 2 reputation.

This is reflected in the suggested edit; the oldest reviews say 'Принять' ('Approve'), so the edit was initially approved, but then the post author decided to 'Отклонить' ('Reject') the edit.

Not the answer you're looking for? Browse other questions tagged support bug reputation edits rollbacks .

105
Could authors overturn recent community review decisions?
9
Do you lose rep if your edit is rolled back?

711
How do I get attention for one of my own questions without a good answer?
212
What is the etiquette for modifying posts?
296
How do suggested edits work?
573
What is serial voting and how does it affect me?
357
Reject an already-approved suggested edit when rolling it back
0
Edits to preserve author code formatting rolled back. Why?
5
Should this edit be rolled back?
21
Notification when your edit has been rolled back