It seems to me that certain people are treating the acceptance of neopronouns as novel:

As such, they are experimenting with using neopronouns in places where a traditional pronoun would be called for. It also seems (although I could be wrong) that many of these users are not native English speakers, so are unaware of the sensitive cultural issues they have wandered into.

Comments from one chat thread: 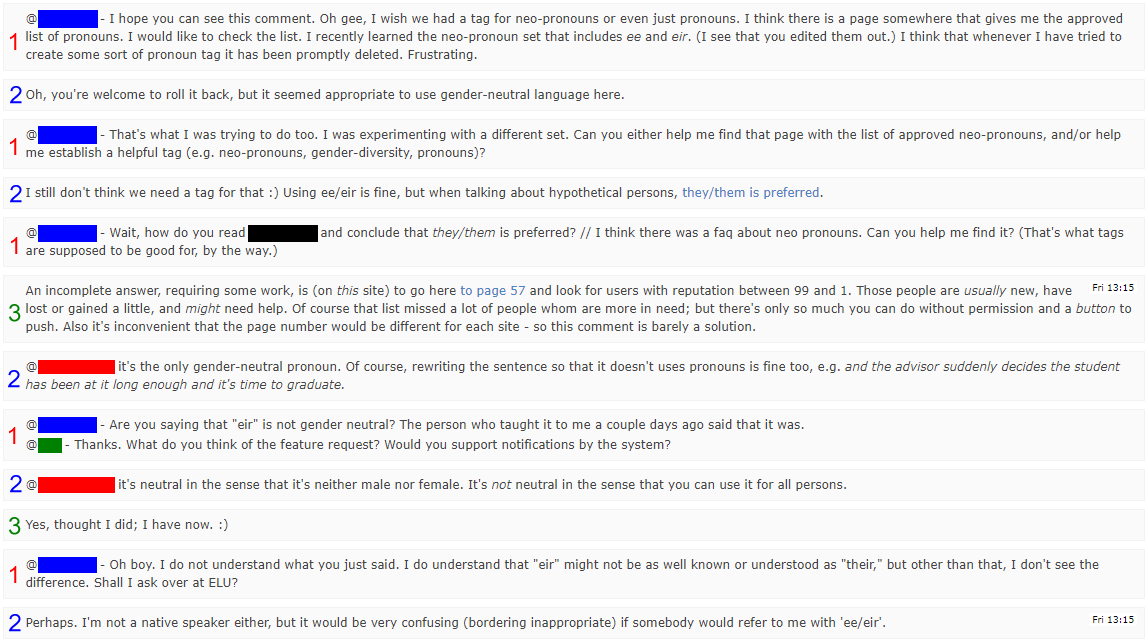 I recently learned the neo-pronoun set that includes ee and eir.

That's what I was trying to do too. I was experimenting with a different set.

Are you saying that "eir" is not gender neutral? The person who taught it to me a couple days ago said that it was.

This user had apparently decided that they could use these pronouns for everyone after learning about them for the first time. Doing so is not using pronouns respectfully, although they may not have known this at the time. I have seen this in a number of places over the past few days, often in comments. These comments are quickly deleted, but I don't know if that's because a lot of comments in general are being deleted at the moment, or because the moderators perceive the usage of an incorrect pronoun as an issue.

How can we gently educate people (or make people aware if you prefer) when this happens across the SE network that neopronouns are not a game, but are one of the ways we show respect for other people, and that using a pronoun that was not called for is disrespectful?

I'm not asking about how we can comply with the letter of the CoC, but how we as the community want to handle this issue, to let people know that although they haven't yet gone against the CoC that they could do so inadvertently? Do we even want to warn people (and keep them in the community) or let them breach the CoC (and get rid of them)?

You are thinking in a very polarized way about what is not — to my knowledge — a hard and strict rule.

My understanding on the Stack Exchange pronoun policy is that one should only concern themselves with pronoun usage if they person being talked to cares. Meaning if they don’t care, you don’t care.

I don’t think any users need to be “educated” here. But I believe users should be aware of the fact some users might desire pronoun respect.

I think part of the core problem with the new “Code of Conduct” and the pronoun policy is simple: It’s not that there’s anything unreasonable being asked for, but the policy was rolled out like a boulder falling on top of Wile E. Coyote.

As it stands, I am relatively new to this whole kerfuffle, but the Code of Conduct on its own seems 100% fine. The way it was implemented — and the mods/users it alienated as a result — is part of the problem.

And — personally — think the fact non-native speakers/writers (aka: non-English/non-Western) were not factored into the pronoun discussion is really face-palm worthy. Other cultures might not have an understanding of what this means… Especially when many people in the Western/English-speaking world are not 100% clear on it either.

Anyway, if someone asks:

“So what am I supposed to do now? Refer to everyone as ee and eir?”

The answer should simply be:

“Only if that person requests as much. You should just be aware if someone says something, there is a reason for that.”

I see this somewhat similar to the use of “Happy Holidays” in the United States. As a (first) American born secular Jew, I have always found someone wishing me a “Merry Christmas!” to be mildly oppressive; I live in NYC and honestly telling people I didn’t celebrate Christmas was a painful experience that often led to questions about how Jewish I was and blah, blah, blah… And I live in NYC where this should not be an issue, but still, right?

This all comes down to what should be basic respect and not some oppressive rule enforcing.

Then again — as I stated above — the rollout of this Code of Conduct was just an abysmal affair of good intentions gone awry.

Anyway, Happy Holidays to all!

I didn't mean any disrespect, and I apologize if it seemed otherwise.

In case it helps, I will explain a bit about my motivation for the experiment.

I've sometimes been in the uncomfortable situation where some participants at some SE sites assumed my gender was this or that, despite my preference not to have gendered pronouns used in reference to me. (My profile includes "Pronouns: they, them, their, themselves.") Some moderators have provided the support I've sometimes needed, and some have not, specifically telling me that I was on my own, and that they would not delete any gendered comments that referred to me. (That was before the change in the CoC.)

I had never heard "ey" and "eir" until quite recently, and I was intrigued. I learned that a friend uses these pronouns consistently when teaching, when communicating about a general person, when communicating about a person when gender isn't relevant to what's being said, and in developing board games. I understood it to be an alternative to "they/them," as a way of avoiding unwarranted gender assumptions.

Here is the sentence I wrote that included these pronouns:

... seemed analogous to a graduate student who's been plugging away for a certain number of years and eir advisor suddenly decides ey've been at it long enough and it's time to graduate. (Source)

I'm sorry I wasn't able to respond earlier. I was under suspension.

2521
Firing mods and forced relicensing: is Stack Exchange still interested in cooperating with the community?
60
Can a user use neopronouns for any third party?
-9
Please lower rep threshold to get automatic notifications about new user activity
-8
Why are comments being deleted so quickly at the moment?

1503
Fastest Gun in the West Problem
1851
Could we please be a bit nicer to new users?
2798
A Terms of Service update restricting companies that scrape your profile information without your permission
828
Net Neutrality and Stack Overflow / Stack Exchange
2521
Firing mods and forced relicensing: is Stack Exchange still interested in cooperating with the community?
526
SE Inc. Director of Public Q&A retweets bad-faith, misrepresentative tweet
311
A Pronominal Proposal
667
Monica's situation continues unresolved. Is SE hoping the problem just goes away?
2284
Stack Overflow is doing me ongoing harm; it's time to fix it!