Would it be possible to add a “Hey Guys” warning filter/block to question and answer posting on some Stack Exchange sites?

When I catch them, I remove them while keeping post context in mind. But considering the Stack Exchange network’s desire to make this place a more friendly and welcoming place for all, would it make sense to add a “Hey guys…” filter that would warn or prevent posts from being made of the words “Hey guys…” show up in the post?

The type of filter I am thinking of is similar to the one that catches anyone posting a question title with the word “Help” in it. But in this case it would — of course — attempt to detect words in the body content of posted questions and answers.

What the wording of that red text would be and what would it link to? Unclear myself. And I would not be insistent that posts be completely blocked due to “Hey guys…” triggering a warning; perhaps something like an “FYI” box shows up that allows an original poster to self-edit if need be. And perhaps limit such a filter to the tech-focused sites since those fields — for better or worse — tend to be male dominated.

But I personally find the low-level buzz of “Hey guys…” being posted on Stack Exchange sites something that can be dealt with and lead to positive outcomes for all.

And honestly, it seems to consistently be in the first two words of the body of a post, see screenshot below of the results on Stack Overflow for example: 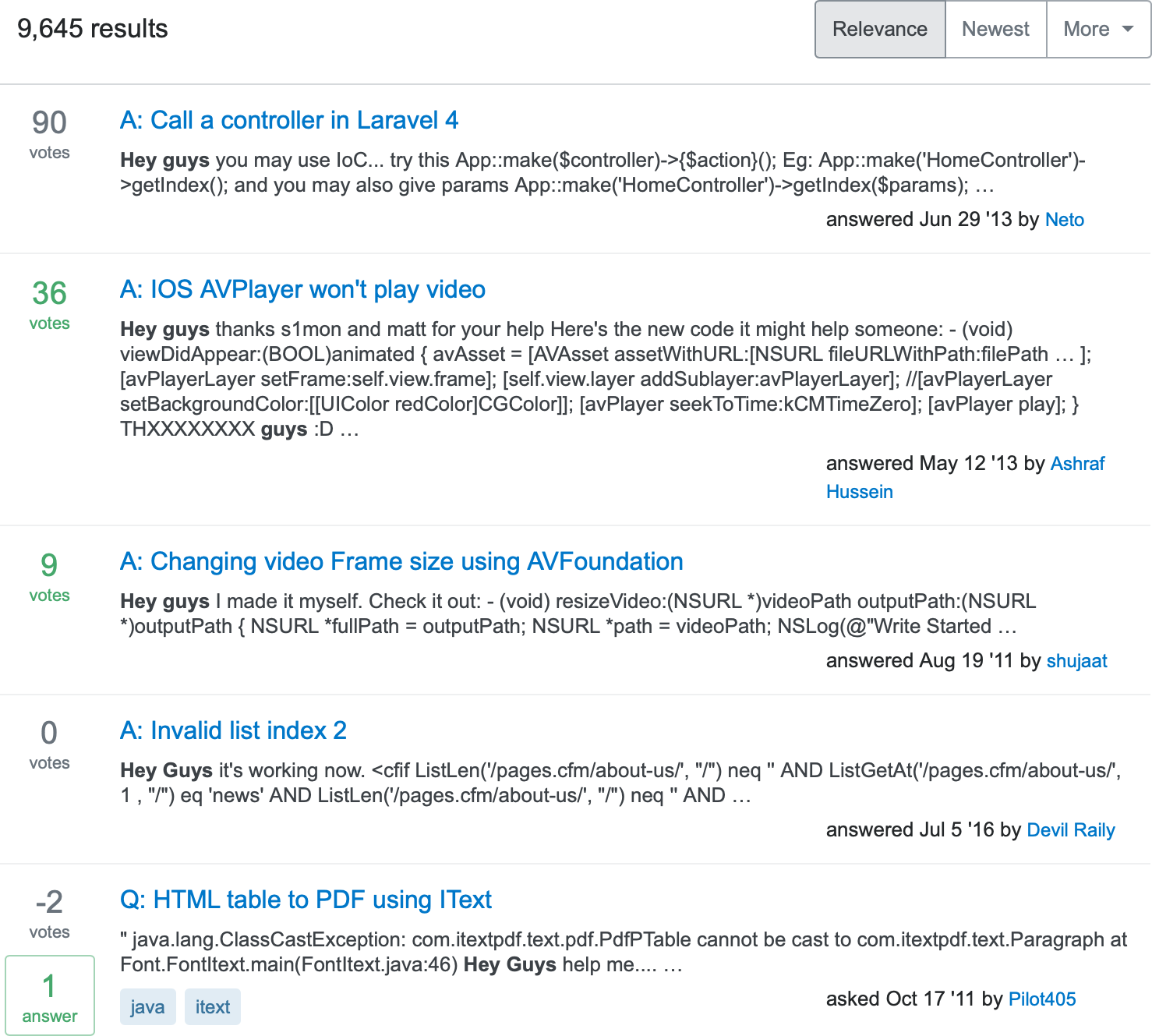 And for context for those who don’t really understand the issue of using “guys” casually like this, here are two decent articles that delve into this issue:

I don't think this is a particularly good/well thought of feature request.

Things that are on the blocklist for titles - problem and help, for example, tend to be harbringers of other issues, or generally useless titles.

I guess the questions I'd ask myself are

share|improve this answer
answered Jan 2 at 3:01

To me, the question comes over a bit "narrow minded" (and I don't mean the fact that guys addresses "humans" in general, it is acceptable to be used with groups of people of different gender). I think solely talking about "hi guys" isn't enough.

When you prevent those specific words, then people will find other ways to "salute" their audience! The real problem are salutations!

If we want to be serious about such a feature change, then: we should ask for some real AI/NLP capabilities. Don't stop at simple pattern matching. Spend the resources required to "understand" the elements in the text, and then refuse content that contains salutations in general.

And nicely explain why we don't want that here. Anything else is a workaround, putting band-aids on one specific kind of injury, whilst ignoring all similar stuff.

I think a red-text advisory could say something like

Salutations - it's best to avoid them and get right to the question.

..because I thought that we were supposed to remove "thanks in advance" and "hello" type things surrounding the text anyway?

(I do like the articles you included links to in your question, and I feel that they should be included in a for-further-reading or part of the longer help text.)

share|improve this answer
answered Jan 2 at 16:07

228
Shortcut or button for copying posted code from Stack Overflow
31
Will it be possible to migrate questions between the trilogy and the Stack Exchange 2.0 sites?
307
Don't remove the @ part of my comment
189
Let users with sufficient reputation use “problem” in titles
188
Using the Stack engine for the blog – a long-term idea for maintaining a healthy blogging culture
491
Implement ```-style (fenced) Markdown code blocks
1161
Don't throw away all votes when a user is deleted
376
Add an “I don't understand” option for review audits
268
Build and strengthen the Stack Exchange community with “crossover questions” between sites