How does the activity on SE-sites compare to previous months/years?

There has been some turmoil lately, and many highly active users, moderators and community moderators have stepped down.

I'm wondering how/if this has affected the activity on various SE-sites (and SO in particular). What has happened to the question/day rate, answers/question, votes/post, number of users answering questions etc.

Is there any available information regarding this? Are there any clear trends? Does it at all affect the overall network activity?

Executing the data-explorer query originally made by Jon Ericson in 2017 (see How is question quality measured in A/B tests?), where he categorizes the questions as:

and looks at the relative evolution, i.e. the time dependent behavior of the number of new such question as percentage of total new questions.

The graph for the last four years for Stack Overflow looks like: 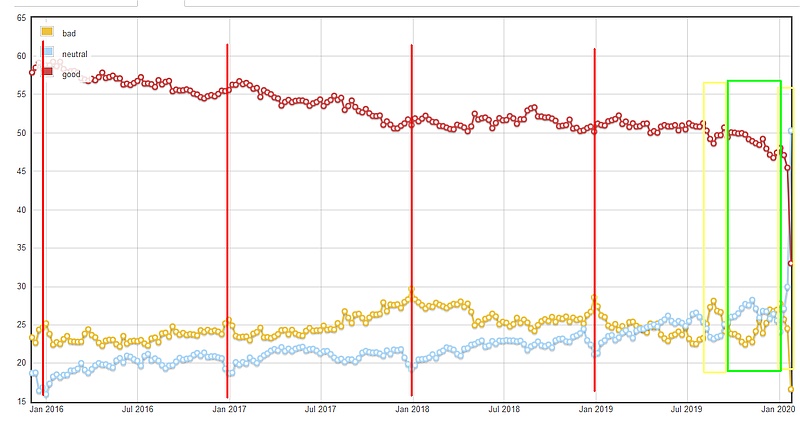 The x-axis is time and the y-axis is percentage of good/neutral/bad questions asked at a certain time. I marked some features. Christmases (red vertical lines) show a relative drop in neutral questions and an increase in bad questions. Either people ask considerably worse questions around Christmas or reviewing activity is increased relatively around that time or both.

Furthermore, there is a first yellow box around August 2019, which marks the 3-close votes experiment on Stack Overflow (bad questions increased and neutral as well as good questions dropped) as well as the second yellow box since December 2019, which is the last months or so, which is influenced heavily by the now permanent 3-close votes condition as well as Christmas as well as the Pronoun/Monica/Shog developments. The last two months are difficult to interpret and I would prefer to wait a couple of months more and see how activity continues.

And there is the green box, which is September 2019 to December 2019, which indeed sees a significant but not very big change in these quantities. In that green box, I would say, the relative number of good questions has decreased even faster than the long term trend, the number of neutral question also increased to a four year high (somewhere in October/November). There might have been a dip in review activity of new questions, which however was more than compensated by the change to 3 close votes in December 2019.

I did similar computations also for a couple of other Stack Exchange sites and I think I remember a similar behavior for Mathematics at the very least. Some people describe this as "mission accomplished", where most of the most important questions in a field that are suitable for a Q&A like here have been asked and answered.

The fluctuations in these graphs are large enough that one cannot say anything else with certainty, and the effect of the September 2019 turmoil may only be temporary and not lasting, but if anything it has accelerated the long term trend, I would say.

On SO (in particular) there was a drop in activity during the end-of-year holidays.

The number of posts now is the virtually the same as last year -- now 18000 posts per week compared to what looks like an average of about 19000 for the whole of last year, and identical to this month last year.

The ratio of questions-to-answers doesn't seem to have changed.

That number (i.e. posts per week on SO) has been trending downwards very gradually and smoothly, over the years -- for example it looks like it was about 23000 in 2015.

Which might be insignificant -- i.e. it's the same order of magnitude, and there are probably more important metrics than the number of posts per week.

Anyway I see no evident recent change at all to that metric -- and thus nothing attributable to "some turmoil lately" -- who knows, perhaps that story is different on other sites, or there's some other metric where it is visible.

Of the sites where I've got access to analytics:

Not the answer you're looking for? Browse other questions tagged discussion statistics .

65
Are other sites (besides MSE) growing inactive?
74
How is question quality measured in A/B tests?
6
Where should I ask my [marvel-cinematic-universe] questions - Science-Fiction or Movies?
4
Is there a way of seeing the evolution of the statistics of a site as a function of time?

406
Graduation, site closure, and a clearer outlook on the health of SE sites
2782
A Terms of Service update restricting companies that scrape your profile information without your permission
418
Can a machine be taught to flag spam automatically?
290
Why we don't keep public records of suspensions
2478
Firing mods and forced relicensing: is Stack Exchange still interested in cooperating with the community?
192
A general call for increased transparency from Stack Exchange, Incꓸ
2203
Stack Overflow is doing me ongoing harm; it's time to fix it!
970
Firing Community Managers: Stack Exchange is not interested in cooperating with the community, is it?
548
The company’s commitment to rebuilding the relationship with you, our community