Is there a mechanism for closing graduated SE sites?

I'm familiar with the Area 51->Beta->Graduation process for creating new SE sites, but is there an established mechanism for closing SE sites either permanently or temporarily? Has it been done before?

By "closing" I mean either completely deleting a site and all its contents or just closing it to new questions/answers, perhaps only temporarily. This company blog post from 2012 When A Site Grows Quiet discusses closing struggling sites in Beta, but not graduated sites. Presumably Stack Exchange, Inc. can unilaterally shut down a site whenever they like, but is there a way for the community to request/suggest that they should do so?

This is a general question, but my specific reason for asking is that Writing.SE has basically died since October (see below). There is still some activity there, but no active moderators and the questions/answers that are being posted there are of questionable quality (see e.g. Has there been a noticable downturn in the quality of questions on Writing SE?). Several previously active users and moderators have left and set up an independent fork of the site. The current situation seems unsustainable, and it would be a shame for the existing site content to be gradually swamped by unmoderated stuff.

There are specific reasons for this happening to Writing at this specific time, but it's not unimaginable that it could happen to other sites for other reasons at other times. Is this uncharted territory, or is there a way to put sites like this to bed gracefully? 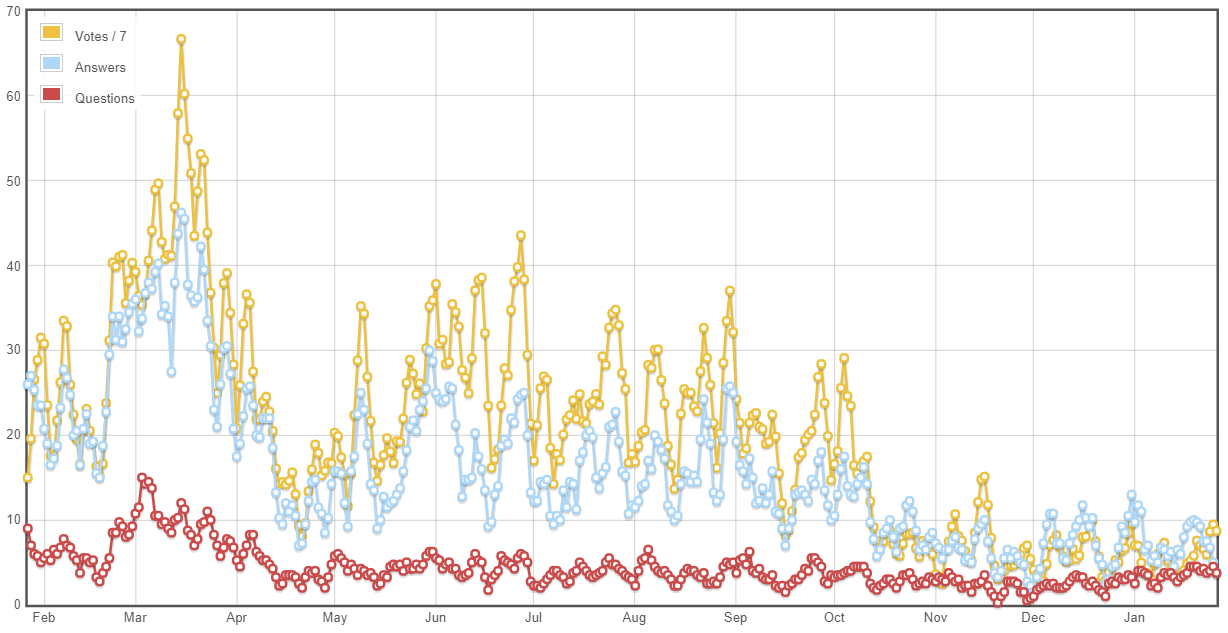 The blog post you linked is a bit out of date: SE no longer shuts down sites simply for "struggl[ing] to maintain any semblance of steady progress". But a few sites have still been shut down in the last year or two:

As I recall, in all three cases the shutdown was because of not enough people to moderate the sites (moderators went inactive or wanted to step down, elections were held and nobody nominated themselves). The argument was that, if nobody was willing to step up and keep the sites nice and free of spam etc, then there couldn't be enough participation/activity to keep the sites running.

After a site is closed, SE stops hosting the URL and content, but a data dump remains, containing all the content of the questions and answers, which can be freely downloaded.

CM Catija has confirmed in a comment that the above would apply to graduated sites as well as beta sites. Any perceived 'guarantee' that graduated sites are immune to shutdown would simply have been a general principle that sites with enough activity to graduate are very unlikely to need to shut down (the fact that no graduated site has been shut down to date is simply incidental).

In the case of Writing SE, there are no active moderators currently, but probably SE will try to run elections in the next month or two. If some people want to step up and try to rebuild the site from the ashes of the departed community, they may get a chance to do that. If not, it will be a sad day indeed for a site that fought so hard for graduation and finally achieved it.

498
Congratulations to our 29 oldest beta sites - They're now no longer beta!
410
Graduation, site closure, and a clearer outlook on the health of SE sites
122
The Windows Phone SE site has been archived

1166
Are there any clones/alternatives for running a Stack Exchange style Q&A site?
258
Closing changes: [on hold], unclear, too broad, opinion-based, off-topic reasons, bye-bye to Too Localized
410
Graduation, site closure, and a clearer outlook on the health of SE sites
829
Net Neutrality and Stack Overflow / Stack Exchange
164
Writing.SE clamours for graduation
2528
Firing mods and forced relicensing: is Stack Exchange still interested in cooperating with the community?
584
We're switching to CommonMark
190
Testing three-vote close and reopen on 13 network sites