Why do Chemistry and Physics SE use text numbers instead of lining numbers?

[N.B.: I use a Mac, but I'm assuming the following is not Mac-specific.]

I've noticed that, font-wise, SE sites can be divided into two categories:

1) Those that employ a sans-serif font (e.g., TeX SE, superuser SE, and this one). These display numerals as "lining figures" (~full-height numbers designed to line up with upper case text).

2) Those that employ a serif font. These display numerals as "text figures" (~half-height numbers designed to line up with lower case text) (see: https://en.wikipedia.org/wiki/Text_figures). Here's an example from Chemistry SE: 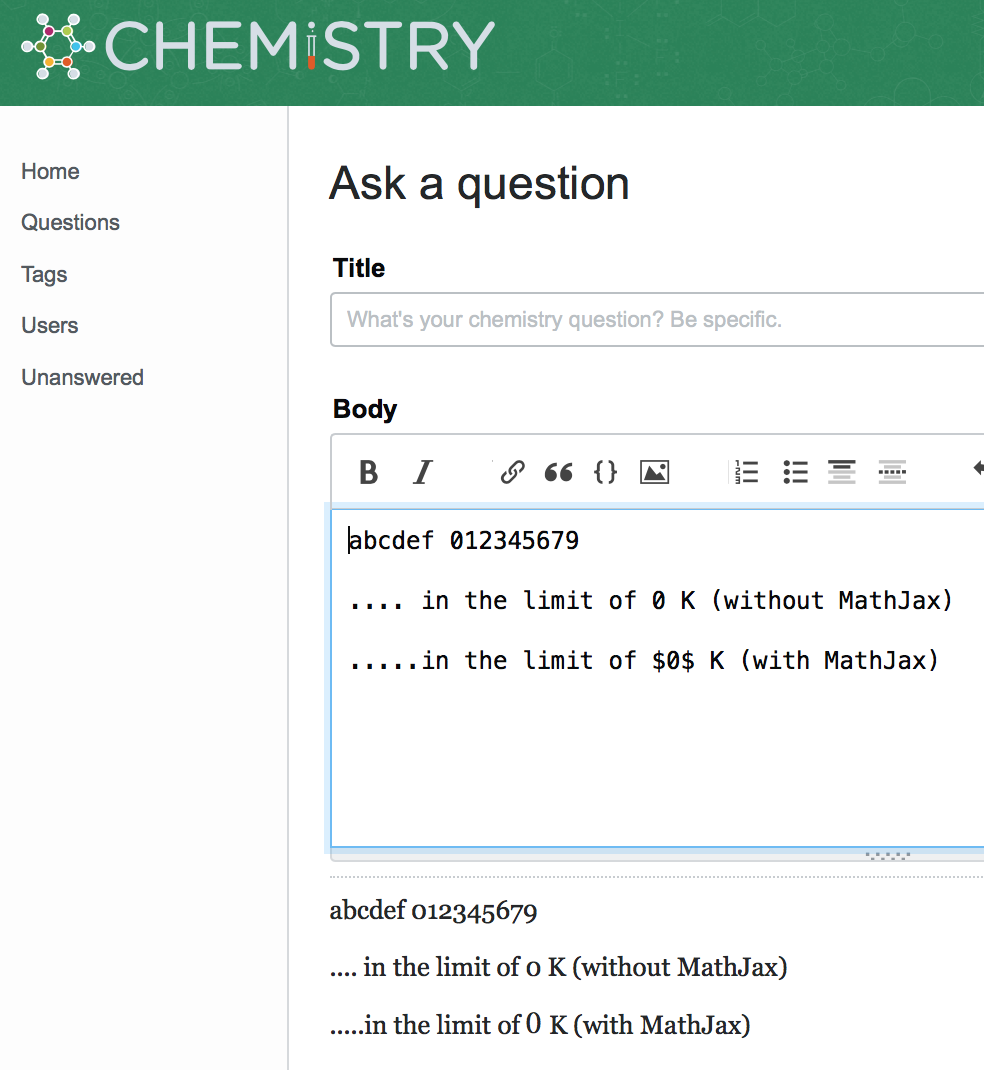 Here's the problem: Sites like Chemistry SE and Physics SE have many math-heavy posts. The half-height numbers make posting more cumbersome, since they somewhat necessitate the use of MathJax every time a numeral is written, even if it is within a block of text.

I.e., if the poster doesn't use MathJax when writing numerals within text (as in the example above, "0 K", which means zero kelvin), the appearance of the numerals will not only be notably inconsistent with those displayed within MathJax (where they are full-height), but also sometimes confusing to read: For example, on MathJax-enabled sites, "0 K" looks like "o K", i.e., like the "K" is preceeded by a lower-case "o". This is not an issue on sites that use lining numbers, such as this site, where "0 K" looks perfectly fine.

Indeed, within text, I would argue that "0 K" on a sans-serifed site (like this) is not only less cumbersome to type than "$0$ K"——it also looks better: On a MathJax-enabled serifed site, the zero isn't properly positioned (it's too high, and too close to the preceeding text; see screenshot above). It is possible to correct the horizontal spacing, but that makes things even more cumbersome if you have to do that every time.

Given this, why not use a font that displays lining numbers on sites that have math-heavy posts?

ADDENDUM: What motivates this is the idea that we're all volunteers, and the site should be designed to encourage posting with the minimum "friction". Consider, for instance, this comment (which I added to my answer to this question: Infinite Increase in Entropy when Energy added to Absolute Zero):

Mine is the second comment, made in respose to the question by the OP. As it was a comment, I didn't really want to bother with using MathJax, so I didn't; my focus was instead on doing the work of giving the OP the clarification s/he needed to understand my answer, and getting it out promptly (note the date stamps). Nevertheless, because Chem SE uses text numbers, I had to add dollar signs around every one of the six zeros. When I'm focusing on that, I'm not focusing on the content. That's added friction. And every added bit of friction can make the difference between someone bothering to give additional help vs. not.

With the sans-serif font style used on this site, that comment would have been perfectly clear and readable without the need for the added dollar signs.

We use a serif font on Chemistry, because we specifically requested it when we graduated and the site design was created. One of the main concerns was that we can distinguish between I (capital i) and l (miniscule L); see Chemistry site design ideas - input welcome! or predating any graduation: Can we have a font that harmonizes with inline MathJAX?. The initial draft actually featured a sans-serif font (Chemistry site design), but after some convincing (disclaimer: I was one of the main advocators for a serif font) that decision was changed. Why this specific font was chosen, I do not know.

Somewhat recently the topic of this font has come up again, see Should chem.SE use Georgia font? I guess most were kind of happy with the status quo, at least happy enough to not follow through with an actual feature-request.

N.B. If you ask me, any mathematical construct should be typeset with MathJax. It is a more consistent look when switching between displayed formulae and inline, and it doesn't break those constructs apart. You know, having the value on one line and the unit on another, etc.. On Chemistry, we even have the mhchem package loaded, which makes typesetting units a lot easier and more robust (It even gets the spacing right); see How to write physical units.
In any case, $0$ K is the worst possible choice, because it combines the disadvantages of MathJax and the font. (Also, it is zero kelvin with a miniscule k and no degree.)

Not the answer you're looking for? Browse other questions tagged feature-request design fonts .

9
Why do some parts of the standard theme use different fonts than the rest of the site?

15
Please build in stylus-to-TeX input in the Android app
11
On dollar signs in the user Location field, and character limits on overlong Locations displayed in the Users page
9
Why do some parts of the standard theme use different fonts than the rest of the site?
123
Responsive Design Themes - What can sites customize and how can they get changes implemented?