I recently noticed that the red background highlight behind deleted posts is now a much lighter shade of red than it used to be in the past.

While I'm generally in favor of having higher contrast ratios for text across SE, I think this crosses the line a bit. The previous background was readable to me and didn't pose any contrast ratio issues to me. On the other hand, the new color is less visible than the old one and difficult to see on monitors with higher contrast settings. In other words, the contrast ratio between the red background and the white surroundings is too low.

As a test to see the magnitude of this issue, I tried raising my display contrast. By default, it's set to 20%, but setting it to 40% made it barely visible unless I really squinted at it, and setting it to 50% made it just about invisible. Some users may turn up their monitor's contrast to a higher level to better read text on screen, but this change makes it more difficult for those users who engage in moderation to identify deleted posts, especially if they've scrolled down.

Can we please make the shade of red that appears underneath deleted posts be darker (while still retaining WCAG Level 2 AA compatibility)?

Here's an image of the current configuration: 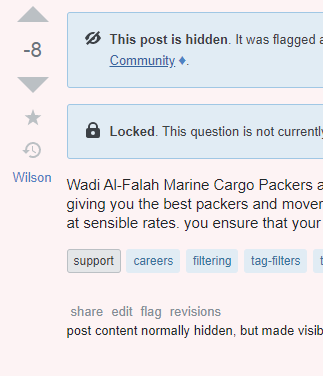 ...and the previous configuration:

I hope that this is one of the unintended consequences of the CSS refactor.

57
New colors for vote counts are not accessible; please make them darker
8
New red/green background in revision history is too light and not visible

20
New badge for questions with a high number of views, high number of votes and no answers
18
New background for deleted posts
7
Allow high-rep users to recommend posts for and against tweeting
4
Why not display the CoC link for comments on all questions and answers (not just new contributors' posts)?
5
Color for new events in dropdown is too light