We are planning to release a new feature on the network in the next few weeks that will give users the ability to follow and unfollow questions. This was mentioned by Teresa in the Q1 Roadmap. The plan is to roll out these changes in multiple releases. (Work is well underway, and we are aiming for a release by the end of March. However, current events make it likely that delays may be introduced into the process, so it is hard to give an exact commitment right now).

The initial release of this feature will allow any logged in user (other than the question owner) to follow a question. If a user follows a question, they will receive inbox messages related to any event for which the post owner would have received notifications:

The inbox messages sent to post followers will indicate that they are the result of the question being followed, to distinguish them from notifications related to someone's own posts. And if you allow it in your email preferences, the inbox messages (if unread) will also eventually be emailed to you as well.

Users will be able to stop following a post that they have followed at any time.

We are planning to follow up our initial release with:

Once all of these changes have been made, this is what a question will look like — you can see [following] in the question menu along a popover that appears immediately after clicking the [follow] link, and the star icon for [favorite] has been replaced with a bookmark to match the new term. 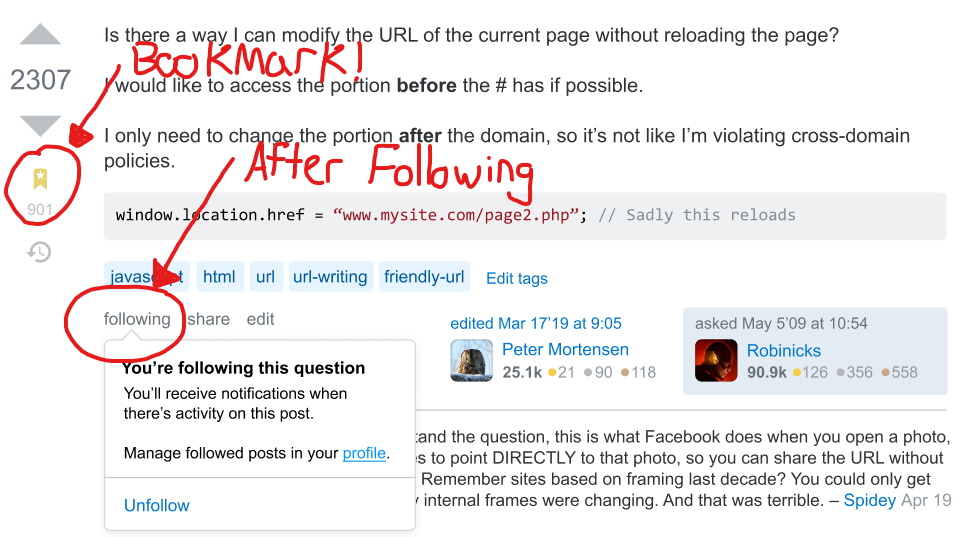 Though we know that this has been requested in the past, there are some big technical hurdles to implementing this properly (even for a small-scale test) that preclude its inclusion in our current schedule. Additionally, allowing a post owner to mute new answers and comments (or any user to mute @pings) has additional potential side effects to the long-established norms of the site that require further research before we can proceed.

Is this a feature that you're interested in us looking into more and working on? If yes, tell us why in an answer.

We're really excited to be able to finally implement a feature that our own Kevin Montrose first asked for back in 2011 - and that has been requested repeatedly over the years on many of our meta sites including MSO. We got to the solution we have now by reviewing these many years' worth of questions and talking one-on-one with users about this feature.

Given past requests and common follow/unfollow patterns, we feel good about releasing this first iteration of question following later this month. Once the first release launches, we'll ask for your help in telling us where you think we should iterate on the functionality and experience.

For now, if you see something that is confusing, that could cause issues, or could impact user experience, let us know in an answer.

All data about followers should be kept private.

Following poor posts that need further attention will be common use case. Experience tells me that many such posts will eventually get closed and deleted and there is no need to additionally publicly expose curators to potential harassment.

Also, data that posts has followers should also be invisible. Many people currently interpret favoriting a question as some sort of "quality proof", while in many cases it is just used as poor man's follow feature. For instance, because you want to cast delete vote on unsalvageable question later on.

On many occasions I have seen complaints on SO Meta stating "But, why is my question closed when it already has two stars?"

Will the new "Bookmarks" (now "Favorite") feature have a "set private" option so only I (and maybe moderators) can see my favorite list??

If a user follows a question, they will receive inbox messages related to any event for which the post owner would have received notifications:

When I edit or comment on my own question, I don't get notified. However, if I follow a question because I might be able to help the author out once they've added additional information (in the form of a comment, or better: edit to the question), I'd like to be notified as well. Will this happen?

The ability to unfollow one's own question or answer would be useful, e.g. and the case of a comment war on a post, or if the poster doesn't want to think anymore about the post (e.g. because they aren't interested in the topic anymore). For example if someone asks a question about Ruby but one year after they don't use Ruby anymore, notifications regarding their old Ruby answer or question can be seen as noise and can make them is more important notifications.

I understand that one of the concern of allowing people to unfollow their own question or answer is that it may undermine the OP's role as post caretaker but other people may still edit the post anyway, and if the OP isn't interested then they are unlikely to make further edit. I believe that we should view Stack Exchange as a QA website useful for all and not just the OP and original writers of answers.

Not the answer you're looking for? Browse other questions tagged discussion announcements follow-post .

217
The Follow Questions and Answers feature is now live across the Network
798
Recent feature changes to Stack Exchange
146
The Q1 2020 Community Roadmap is on the Blog
148
Adding Favorites to the Stack Exchange global inbox
185
Subscribing to questions and comments that don't belong to you
130
Community and Moderator guidelines for escalating issues via new response process (March-April 2020)
55
What events trigger an inbox notification?
39
Can there be an option to keep your list of bookmarks private?
37
What's the difference between "bookmarking" and "following" a post?
15
(How) is the covid-19 situation affecting the 1Q20 timeline/roadmap?
See more linked questions

1491
Fastest Gun in the West Problem
2788
A Terms of Service update restricting companies that scrape your profile information without your permission
2502
Firing mods and forced relicensing: is Stack Exchange still interested in cooperating with the community?
2253
Stack Overflow is doing me ongoing harm; it's time to fix it!
981
Firing Community Managers: Stack Exchange is not interested in cooperating with the community, is it?
217
The Follow Questions and Answers feature is now live across the Network
580
We're switching to CommonMark
139
"Question closed" notifications experiment results and graduation
749
New Feature: Table Support
239
Review queue workflows - Final release