If I downvote a question or answer, and the post is edited, it looks like I can make one another downvote. However, when I click the downvote button again, the result appears to be exactly the inverse: instead of downvote I upvote.

I believe that this is the same situation for upvotes (producing down the second time instead of up).

Actually, both tooltips (up and down) informs about undoing the action - even if you didn't any up/down vote - "...(click again to undo)". This is a little embarrassing.

Let's say I voted on a topic. Then after some time I visit the same topic and I don't know anymore if I voted it or not (sometimes the voted topic is highlighted (up or down), sometimes not - it's not a rule). So I decide to vote this topic down, but in fact I undo(?) it, or even reverse(?) it. I never know.

After the first up/down usage the up/down buttons tooltips should change.

No, you can not down-vote (or up-vote) twice, even if the question/answer has been edited.

So iow, when you click a particular vote-arrow for the second time, it gets undone, not reversed. (I think that's the behavior that you are observing?)

(The scores assume that you are the only voter.)

The SOFU art of reversing your vote:

(The scores assume that you are the only voter.)

This feature request has been implemented, somewhere in the middle of 2013 (check these Wayback Machine snapshots from May and July). The tooltip only shows the '(click again to undo)' when you've already voted: 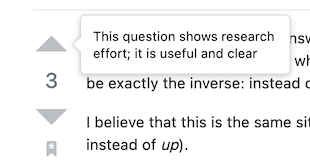 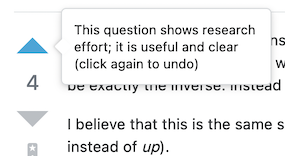 Not the answer you're looking for? Browse other questions tagged feature-request voting tooltips .

4
Craziness with changing a vote

865
Allow an edit to notify downvoters: "I think I've fixed the issue now - please check"
202
Change upvote/downvote tooltip on meta sites
9
Upvote/downvote should be reversible within an hour
36
Show timestamp of a vote in the tooltip when mousing over it
24
Tooltip for Anonymous feedback shows "click again to undo" but can't really be undone
6
Small issue on downvote tooltip (click again to undo?)
421
Add an "I don't understand" option for review audits
139
What's the reasoning behind the vote button tooltips having changed?
12
Can we please clean up the new tooltips around the upvote/downvote buttons?
23
Please revisit the downvote/upvote tooltips on meta sites