There's been some consternation about the new flagging, but I wanted to focus on the syntax for a moment. I think the current shift doesn't really fix anything and it seems to fall into the same trap SO Triage does

[By] consensus here on Meta, it has been decided that "Requires Editing" actually should be applied only to posts that the community can edit into shape, not posts that require editing by the original author. Such posts, it is argued, should be marked instead as "Unsalvageable" since the community can do nothing on its own to salvage them.

I don't want to debate the policy or the interpretation. I want to draw attention to the fact that there is currently a massive disconnect between the official guidance in the UI and the policy as it is enforced by the moderation team.

I don't want to focus on just one reason, however. I think flagging in general suffers from a poorly worded set of options. I wanted to try and address this so I mocked up what I think it should look like 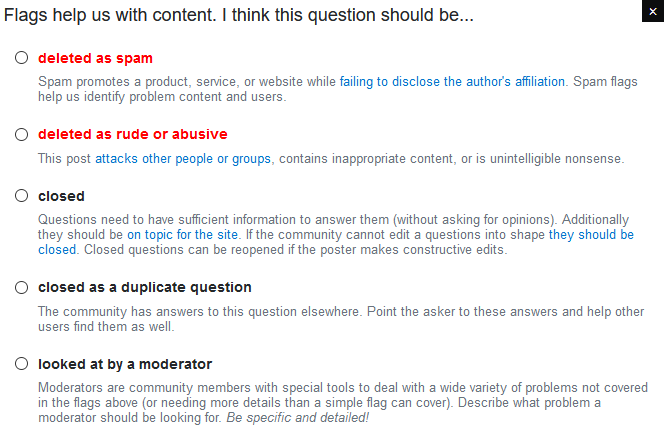 A common problem I run into flagging spam is that people don't always understand why we red flag. I had someone make this quote on Politics under a post that was spam

Mine was not a flag, but rather a vote to delete. Just being "nice"

A red flag is a vote to delete (not in the same way as a Trusted User, but the same net effect). I also slightly expanded the verbiage for spam to include promoting a website (a ton of spam is of the "visit my website" variety). I also expanded rude/abusive to include flagging unintelligible content (a reason few people know about).

Let's not mix terminology. The blue box says closed. The privilege says closed. "needs improvement" is highly confusing because it dumps you into the close dialogue box. Not every close reason is reopenable, either. Let's tell people we want it closed, and make it clear that closure is not necessarily a death sentence for a question or mean.

We need people to understand how and why you should use these flags. I've had several mods tell me that they prefer detailed mod flags when there's any question about a post.

This has been endlessly debated, but I think we can make some minor improvements. Most people do not know when to use Low Quality Post flags. Some verbiage cleanup would help and I try to denote that LQP flags are marked helpful if the post is edited (something that is not obvious)

22
Question Close Updates
67
Why don't we treat rubbish the same as spam?
27
Why are the "off-topic" flag options (including "blatantly off-topic") listed under "needs improvement"?
10
The flagging dialog should not put all the custom close reasons under the heading of "needs improvement"

1476
Fastest Gun in the West Problem
445
Reward finding duplicate questions - +10, +2, -5
131
Proposed improvement to flagging, for answers
193
Allow moderators to reply to a flag
164
Allow recovery from flag hellban
127
Let's get rid of the 10K flag queue
299
Add optional box for spam flags letting you say why you think it's spam
418
Can a machine be taught to flag spam automatically?
171
A machine can flag spam automatically. Can it do better?