This week we rolled out a series of changes to improve parts of the question close workflow. You can read more about the details of these changes here.

For context, the overall effort to improve the question close experience will be optimized for Stack Overflow. Given Stack Overflow’s scale, many of the pain points we hear about with question closing and reopening are unique to Stack Overflow and won’t make sense for other network sites. However some changes are general improvements that should improve usability and guidance overall. Wherever possible, we plan to roll these changes out network wide as well. Any time we roll out a change network wide, we’ll make sure to cross-post here. This first phase is being rolled out to the network and is why I’m posting today.

Let us know if you run into any issues or have questions regarding the network here.

Reality is that lots of irredeemable questions get asked. There are lots of questions which can't be improved in order for them to become acceptable. The flag dialog should not have been changed to put everything under the heading of "needs improvement" when that is not true for many close reasons.

For example: in what way could this question be improved that would make it an acceptable question for MSE?! 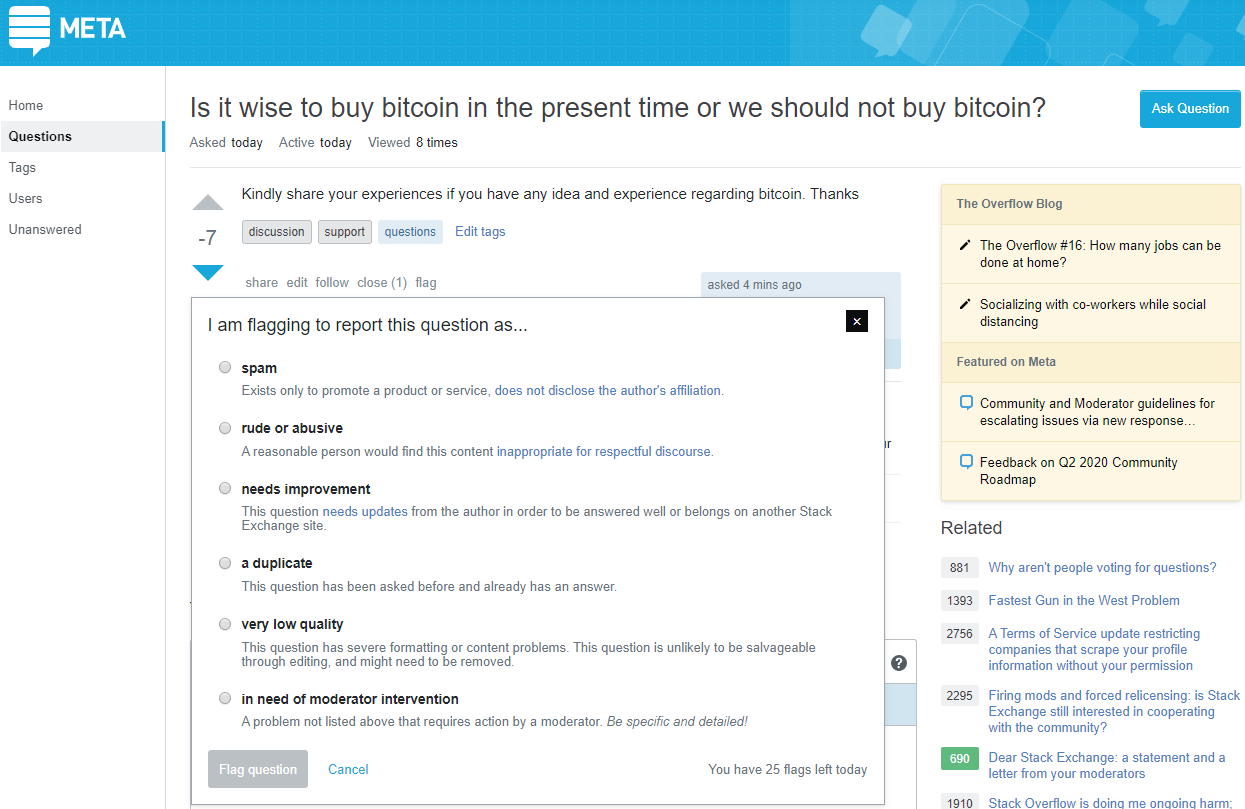 We've had this change for couple of days already, and it managed to cause some confusion. Without something official to point to, users resorted to freehand circles to guide flaggers to the right section when flagging to close. The horror.

Could you please post an announcement before (or at least as, but before is preferable) you release the next phase? I know I'm not the only one who felt a little out of the loop when I went to close an off-topic question and realized that the close reasons were behind a differently named category.

(Cross-post from Changes to the close dialogue have broken keyboard shortcuts for closing a post.)

When using the keyboard shortcuts previously, you could press m, for "moderation", and then c for "close", to open the close dialogue. This still works. However, after that, you can no longer press 1 or 3 or whatever to select a close reason; it just shows "no shortcuts available". 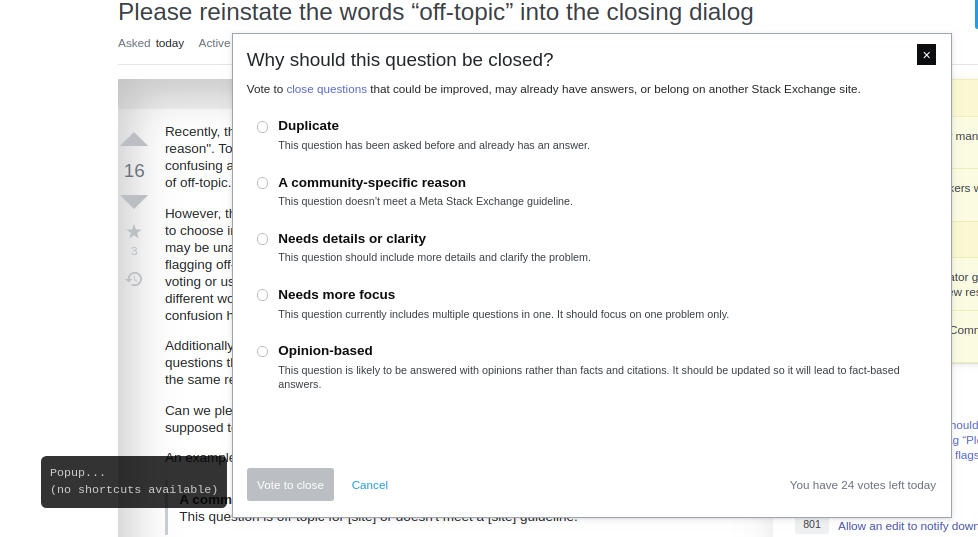 Needs more focus
This question currently includes multiple questions in one. It should focus on one problem only.

This wording is very problematic. I assume it was changed with this set of updates, though it could be that I just hadn't noticed until now.

This close reason is not only about posts that ask multiple questions. It is also about questions that are too broad and which it is unreasonable to expect to be answered in the SE Q&A format. For example:

I remember that SE used to have the explanation that "too broad" could entail "it would take an entire book to answer". I don't remember if that explanation was in the dialogs or not, but it would be worth considering bringing back now.

Compare the new Opinion Based close reason with the old one:

This question is likely to be answered with opinions rather than facts and citations. It should be updated so it will lead to fact-based answers.

Many good questions generate some degree of opinion based on expert experience, but answers to this question will tend to be almost entirely based on opinions, rather than facts, references, or specific expertise.

I think this is especially problematic on the non-technical sites, where certain questions can be easily answered with an opinion, even though they are not seeking opinions.

For example, on a religion site, a question such as "Why does God allow evil in the world?" might very easily lead to anyone with strong feelings on the matter posting whatever opinion they have. But the question is not asking for an opinion. Within the context of the religion there is a non-opinion answer (even if that answer may be a listing of various opinions within the religion).

Or on a media site, a question such as "Why did this character do this?" might result in people posting their favorite opinions, but that doesn't change the fact that within the story under discussion there is a non-opinion reason why the character did what it did.

Is there a reason why this close reason text was changed in this way? Can it be changed back, or at least be further revised?

I can no longer see the close reason I chose:

In the past, we used to know the exact close reason we chose when voting to close a question.

However, in the new close dialog, it's no longer possible: 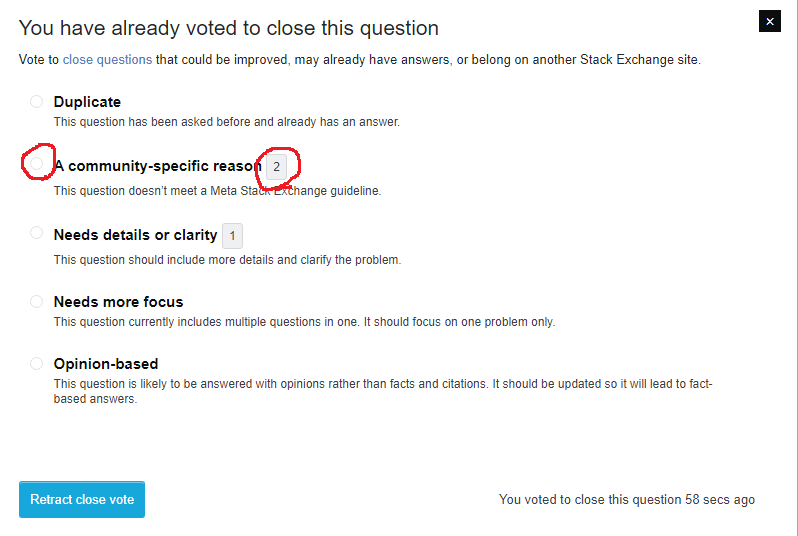 In the above, I chose "A community-specific reason --> This question does not appear to be about the software that powers the Stack Exchange network". I have no way to confirm this after the vote was cast because one can not click on top entries (first page) on the dialog to visit the subentries (subsequent pages).

Can this ability be added back please?

Something seems inconsistent in the label for what used to be called "off-topic". When I click on the close button, the option that comes up is called "A community-specific reason": 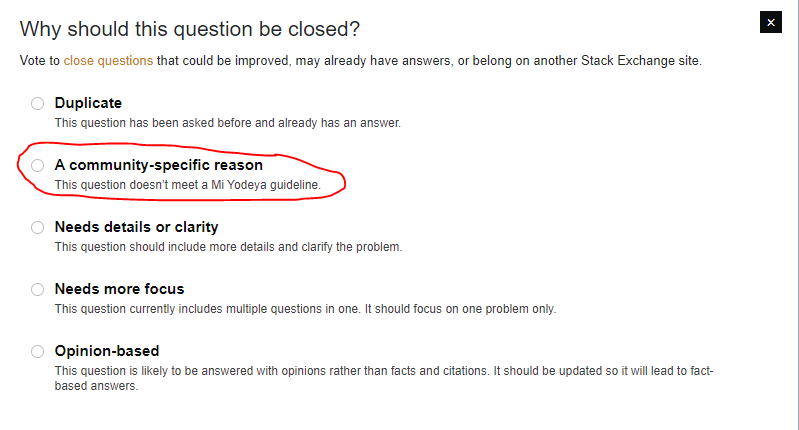 When I click into that option I get sub-options under the heading "Why isn't this question suitable for [name of site]?" 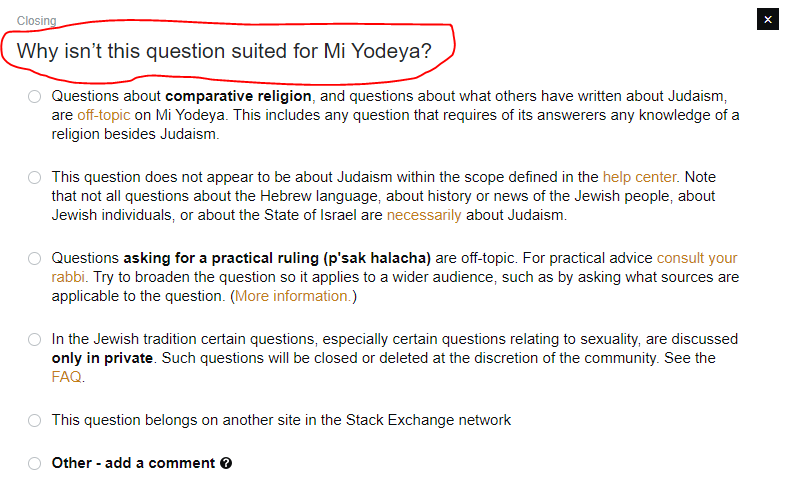 If I check the revision history of a question after it is closed, the reason listed there is "Not suitable for this site":

In all three of these locations the terminology of "off-topic" has been abandoned. Yet the actual close reason that displays on the post itself (both to users with close-vote privileges and those without) is "Off-topic":

The new close/flag dialogs have much smaller draggable title areas. We used to be able to click between the dialog title and the top border in order to move the dialog, now clicking in that area will select text instead. It looks to be about 20px high. If that area at the top of the dialogs could be made draggable again that would be great.

Edit: When closing as a duplicate or choosing a site-specific reason it's a full 45 pixels of non-draggable header!

Earlier when I used to cast a close vote, the dialog would look like this:

Or at least make test distinguishable like that of flags:

Note: I originally posted this as a question on Apr 13.

Close dialog changes have now made going back hard to spot

The old tree at the top of the dialogue was large and a different colour indicating it was clickable. 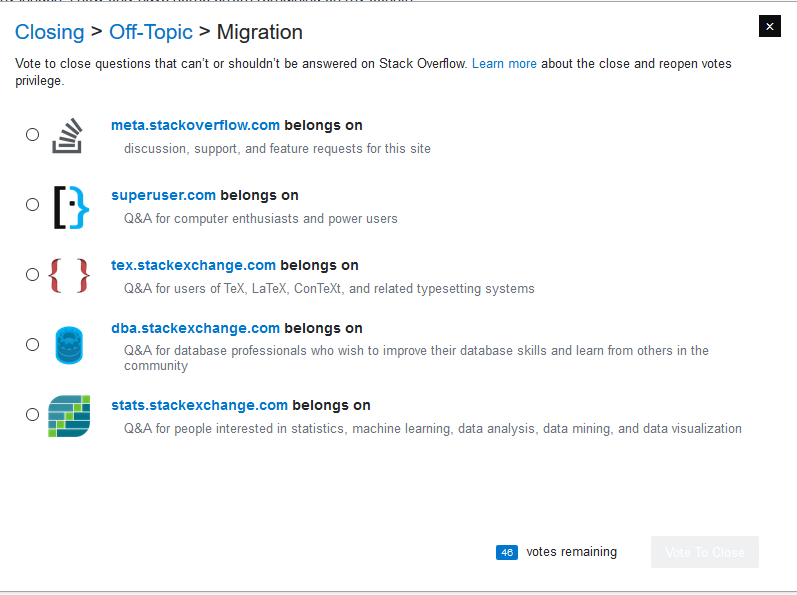 Now it is small, low contrast and all the same colour so it is hard to even know it is clickable so you can go back. 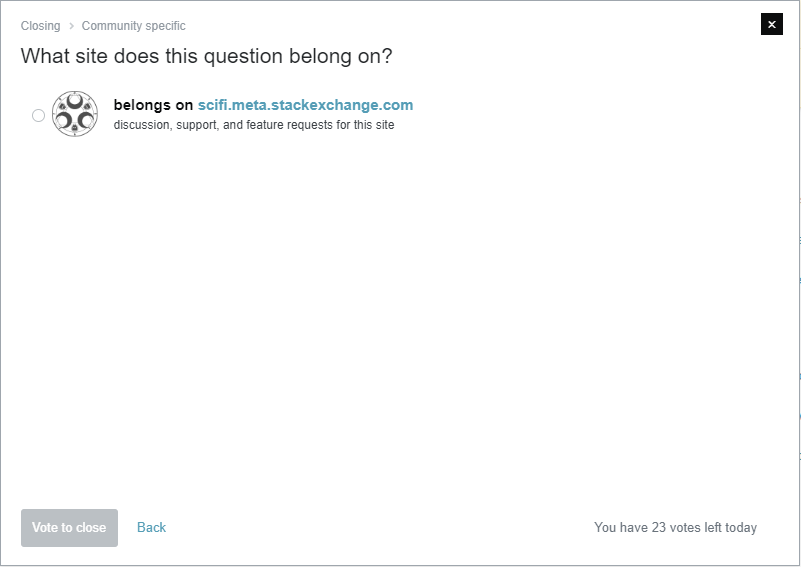 It also misses the current pages title now which makes it harder again to give that colour change to note the other page headings are clickable.

For what it's worth it wasn't until I was writing this question that I even noticed that there is now a "back" link at the bottom.

Can the flag/close button be moved back to the bottom right corner?

The old dialogue had the button in the bottom right hand corner.

The new one now has it in the bottom left corner.

This breaks workflow for those of us used to clicking in the old spot. Whilst I could get used to it muscle memory has already failed me every time so far on both mobile and desktop and it's quite annoying.

To me, and I'm not a UX expert at all, bottom right made more sense. You read left to right, top to bottom. By being in the bottom right corner it is signalling it is the last thing to do/read which it is.

Can we move it back to the bottom right corner? 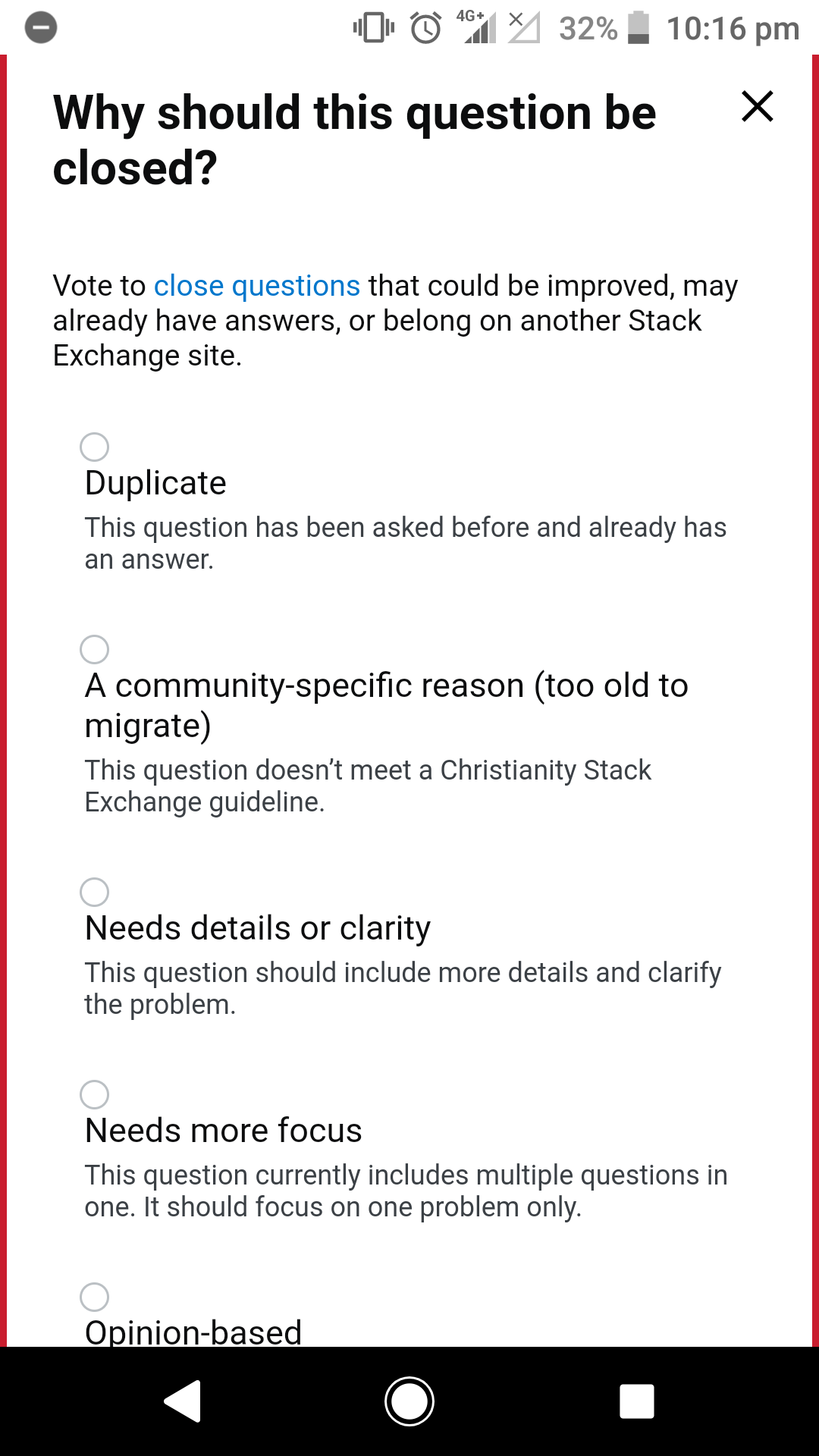 The radio button is on its own line instead of being aligned with its label.

Not the answer you're looking for? Browse other questions tagged discussion closed-questions close-dialog announcements flag-dialog .

21
I can no longer see the close reason I chose
12
Make radio buttons disappear in close dialog if I have an active close vote on a question
10
The flagging dialog should not put all the custom close reasons under the heading of "needs improvement"
6
New close/flag dialogs have much smaller draggable title areas
4
New dialog doesn't display radio options properly in the mobile view
800
Recent feature changes to Stack Exchange
38
New Post Notices are live network-wide
86
Changing the question reopening experience
104
Close the loop on "Too Broad"; make the close reason's actual intent reflected in its message
90
Can we rename the off-topic close reason label on the primary screen?
See more linked questions