Favorites are now known as Bookmarks

As mentioned previously, we are renaming the Favorites feature to Bookmarks. This allows us to both match how it's currently used more closely and communicate what to expect from it better.

Some more background behind this:

If you're already using this feature, you should expect no changes beyond the naming and the icon. If you've never used it... well, it's got a different name now.

Here is the comparison of the old vs new UI on question pages: 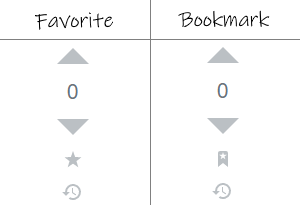 In user profiles, the tab has been renamed to "Bookmarks" but is in the same location and has the same functionality as before.

We've also added a new search operator: inbookmarks. It replaces the existing infavorites operator in the search help pages and output, but both will be accepted and produce the same results.

discussion bookmarks announcements
Share
Improve this question
edited May 8, 2020 at 8:55

According to What tags exist by default on child metas?, there is a default [favorites] tag on all ~170 child metas in the network, e.g. on Meta Stack Overflow but also on the newest private beta site. To give you an idea how often it is used in practice, see this SEDE query.

Instead of having all ♦ moderators manually renaming that tag, can this be done networkwide? And it'd be good to update the template (if you didn't already do this, of course – I have no way to check).

I always dislike those "My question got two favorites and three downvotes" questions on Meta. This should hopefully stop those.

I also like that what I'm using it for is not portrayed inaccurately; a lot of my favorites aren't actually questions that I find useful. Most of them are actually just questions I want to get back to so I can vote to close or delete them.

While you're changing the search tips, please feel free to document code:, too.

Please update the Help Center article How do I search?, section User Operators. It has an entry which still refers to favorites:

infavorites:mine (or any user id) returns only questions that you (or the user whose id you entered) have favorited.

The item is visible while logged out, and clicking on it gives me an error asking me to login. However, there is no tooltip for me when logged out while only hovering on the item rather than clicking on it.

I could understand you might want to show off to guests that a question has been bookmarked a lot, but a tooltip should show up on hover if it's going to be visible; we should not have to click to see what the icon is.

The tooltip still points to favorites...

The menu points to favorites. The tooltip has the same problem:

It's worth keeping the old methods so that existing scripts and apps don't break, but it would be nice to have new /users/{ids}/bookmarks and /me/bookmarks routes in addition. The same holds for the favorited and favorite_count fields of the question object.

Search with inbookmarks:mine without registering any bookmarks, all the questions will be hit. I think in this case the results should be displayed with "no results".

Is there any further development planned on this feature? We recently got this feature request over on the Physics meta, later posted here, which is largely covered by these MSO-then-MSE threads:

The ability to search has been standard for some time, and the ability to bookmark answers is largely taken over by the follow functionality, but the ability to categorize and organize bookmarks (standard in any browser) definitely sounds useful to me.

The English tooltip is:

No other [non-sentence] tooltip ends in a period. Please remove it!

One small bug is that when, from the Activity page, you click on the Bookmarks tab, the order of entries shown may be different than what you had used before. This is because the tab on your profile now seems to always be initially set to Votes regardless of what you had before. For example, for me, I had it set to Activity beforehand on this site, Mathematics, MathOverflow and Mathematics Educators.

Here is what it looked like on the Mathematics site before I changed the right side tab for the display order:

Note this is a one-time issue only, with my suspicion being they're using a new setting field to store this value that wasn't initialized from the previous field value, since changing the tab to use does cause the system to remember this and keep it that way in the future.

The name "bookmark" now heavily implies that it's a feature users use for themselves, not for the community. It now makes even more sense for the list of bookmarks of users to be private than public, like it still is currently. Can you please implement this?

You can just make it all private, or at least make it private by default with a setting to make it public (in case someone wants to publish their bookmarks for whatever reason). Making it private would mean that nobody else (except maybe diamond moderators?) can access this info through the site or data explorer API.

This has been already a feature request, see: Can there be an option to keep your list of favourites private? for the discussion on why it should be private. Also, even if you keep it public (or public by default) please make it obvious that it's public, since users wrongly presume it's private (clicking on a bookmark button is very different from publishing a post or comment). See my answer at that question for details on why and how this can be made more explicit.

If I am on the main SE site (https://stackexchange.com/) and go to my profile from there, I can access my bookmarks from all my SE sites.

But inbookmarks:mine does not work from there.

Since it's not always obvious which site is associated with a given a bookmark, it would be useful to implement it at the top SE level as well.

Not the answer you're looking for? Browse other questions tagged discussion bookmarks announcements .

2793
A Terms of Service update restricting companies that scrape your profile information without your permission
461
Network-wide HTTPS: It's time
459
Employee profiles are now marked with a “Staff” indicator
2507
Firing mods and forced relicensing: is Stack Exchange still interested in cooperating with the community?
2258
Stack Overflow is doing me ongoing harm; it's time to fix it!
554
The company’s commitment to rebuilding the relationship with you, our community
220
The Follow Questions and Answers feature is now live across the Network
582
We're switching to CommonMark
755
New Feature: Table Support
368
Stack Overflow for Teams is now free for up to 50 users, forever