By now, I've solved hundreds of captchas on Stack Exchange, maybe thousands. Often when I post (conservatively, at least 30% of the time), I'm presented with this: 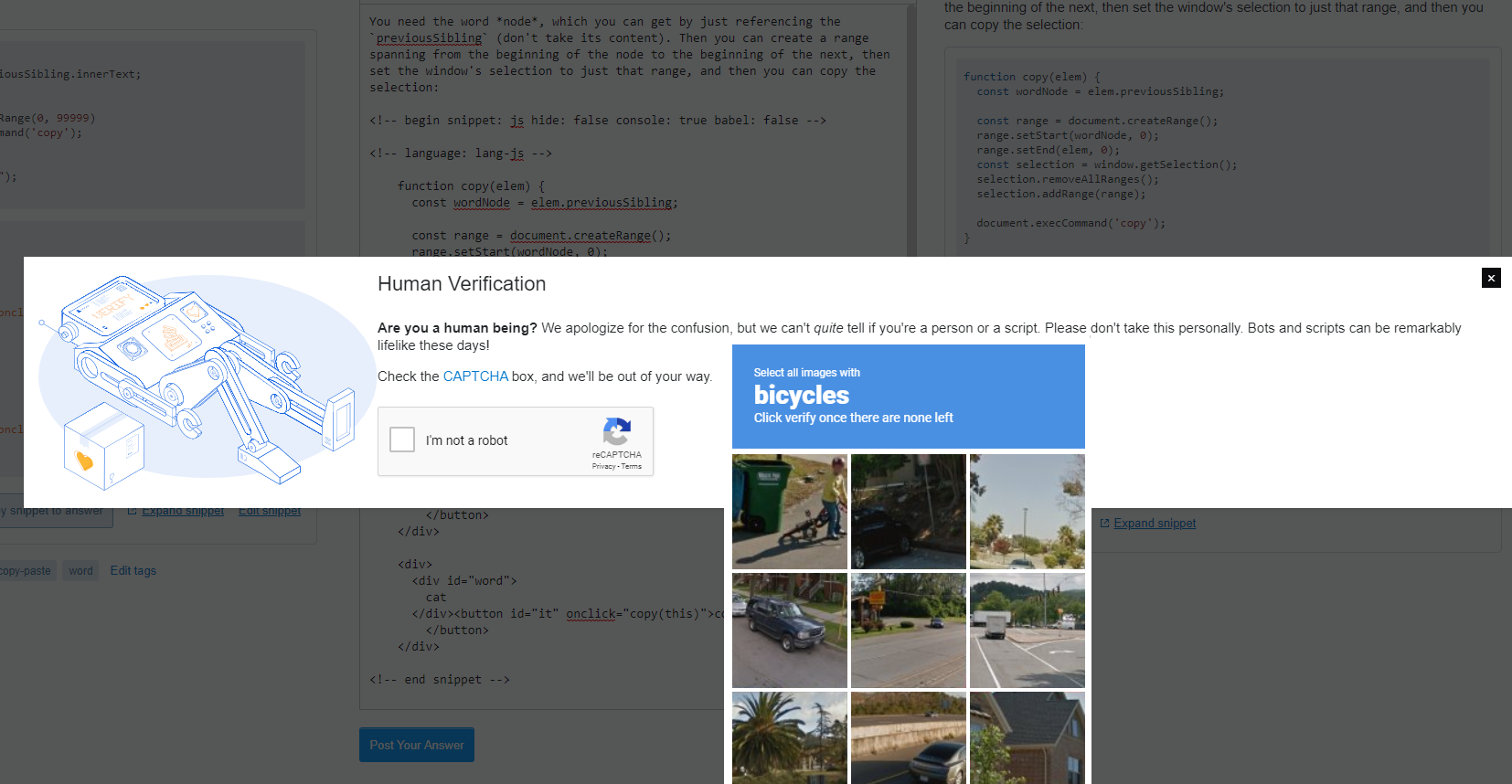 We can't quite tell if you're a person or a script. Please don't take this personally. Bots and scripts can be remarkably lifelike these days!

I'm starting to take it a bit personally - a bot could not have posted thousands of well-received answers over the past few years, nor have I ever posted spam or with a bot - and it should be well within SE's power to recognize this. When I spend 30 minutes composing an answer, debugging, proof-reading, double-checking the logic and rendered Markdown, and then get hit with this when I try to post it, it feels like a minor slap in the face, especially when the captcha comes up frequently when I try to submit an answer.

(I'm sure I'm not hitting any of the listed rate limits - I never post more than one answer in under a minute, and I also always take more than 5 seconds to compose an answer, usually at least a minute)

The captcha usually requires me to analyze which of a bunch of squares (9 to 16) has a particular attribute. For some reason (maybe there's a bug in the captcha), it very frequently rejects my first attempt even when I'm sure I've clicked everything correctly, and I have to try again. So a thousand successfully solved captchas translates to maybe 20,0000 of these squares total that I've been forced to categorize before others have been allowed to view my solutions to their problems.

It's not uncommon for it to take more time to get through the captcha than for me to identify the problem in the question I'm trying to post an answer to.

Spam is certainly a problem here on Stack Exchange - it comes up multiple times every day, and we all do our part in flagging it. It's quite reasonable to require new users which trigger certain heuristics to solve a captcha or few the first time they post, or if they're posting too much in a short amount of time, or if they've posted spam before. But I think it is not reasonable to treat prolific, trusted contributors with the same suspicion when they post.

Would it be possible for Stack Exchange's algorithm for determining whether a user needs to solve a captcha be tweaked so that very likely honest contributors don't get hit by it? I don't know what heuristics are being triggered, but maybe add something like:

Or something along similar lines. I would really appreciate it, and I'm sure other trusted users who have to go through the captcha would too.

I'm not asking support if a change has been made, I'm asking a feature-request for the current logic to be tweaked.

Based on our current roadmap, this isn't work that we will take on, as it doesn't coincide with functional areas that we plan to improve in the near future. We recognize this can be an annoyance, but unfortunately, we can't prioritize it at this time.

I'm not affiliated with Stack Overflow, but I've done some casual research into this stuff as part of my day job and my own interests.

I've highlighted in your image the parts of the screen that I believe are completely out of Stack Overflow's hands: 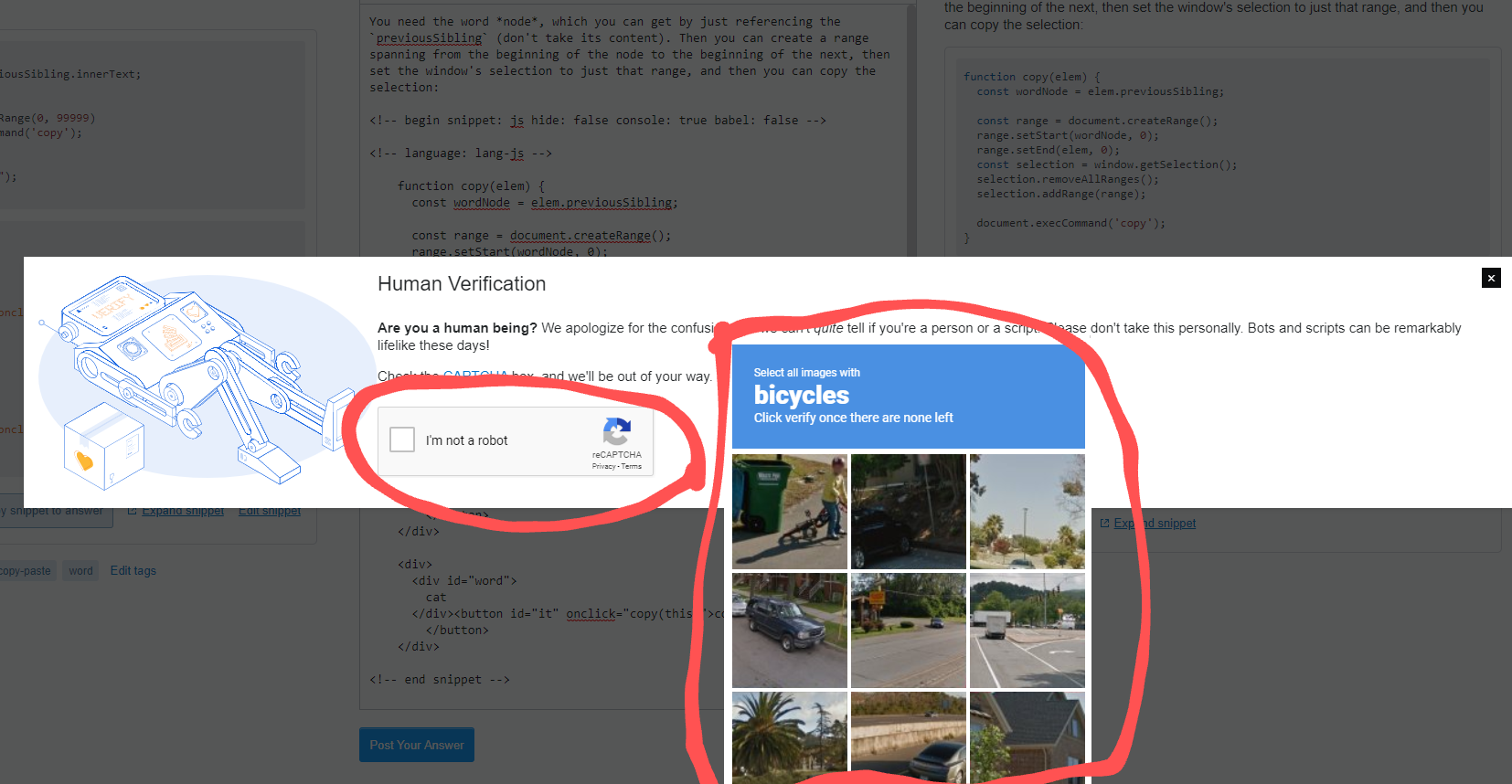 As far as I am aware, all of reCAPTCHA's information come from your browser history, cookies (even for non-Stack Overflow websites) and things like the way in which your cursor moves to click the checkbox. Stack Overflow has no control on how Google treats this data, and can't (as far as I'm aware) easily provide more information to prevent this from happening. I don't think the rate-limiting or time on questions is the only metric that Google have (or even if they could be changed by Stack Overflow).

My wife hits this problem regularly, because she has a habit of checking every single page of results when she does any online shopping, which we think the secret Google algorithm considers to be too bot-like. Browsing lots of Stack Overflow questions might be handled in a similar way by Google's secret algorithm.

There could be plenty more behaviours that Google's secret algorithm considers 'suspicious' as well without that behaviour happening on the Stack Exchange network. That, I believe, is to get around bots being written to build up a browsing history to imitate non-bots.

Wired wrote an article back in 2014 about it, with more details. And here's an answer from our Security stack.

It's also worse on Firefox, when user tracking is disabled

Ok, so we all know you're not a bot... Why should you be hit by reCAPTCHA's?

One of the use cases for reCAPTCHA, according to their own website include Account Takeovers (ATO), where a bot (having built up a browsing history) could try to take over an account here for nefarious purposes. There's other use cases that might apply as well, but this seems the most relevant. Whatever the reason, reCAPTCHA does make the web safer from what I can see, even if you don't directly notice or benefit.

So, why do I have to complete so many photo-grids?

The links above cover this I believe, and I'm least confident in how this works but they are taken from Google Street View, and I believe compared to known verified answers either for that exact photo in a training set or based on the same image detection algorithm Google uses to let you search "cat" in your Google Photos. The issue is that the AI is not perfect, and in clicking on the images you're incrementally training it. Sometimes you disagree with what it expects (and eventually after many others make the same choice, the AI would update and change its opinion on that image), and sometimes even if you flawlessly pick the right images it wants stronger proof you're not a bot.

One small thing to bear in mind if you're visually impaired, is that reCAPTCHA should allow you to complete it non-visually. I've never tried, but the headphones icon on the photo-grid should allow that: 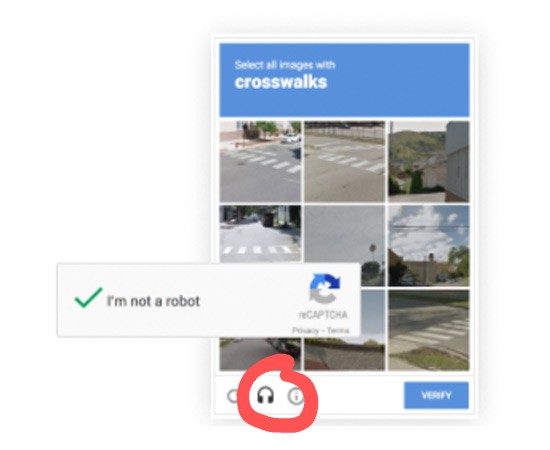 I'm hoping what I've written is both helpful and accurate to how the site uses reCAPTCHA, I'm just sorry I couldn't be more helpful in how you can avoid this annoying issue.

Not the answer you're looking for? Browse other questions tagged feature-request status-declined captcha spam-detection .

3
captcha on quick questions?
334
Don't remove the @ part of my comment
1248
Don't throw away all votes when a user is deleted
171
Make first draft of a new answer part of the permanent revision history
418
Add an "I don't understand" option for review audits
93
Would anyone care for some processed meat-like substance with a gelatinous glaze?
11
Replacing reCAPTCHA