I had an interesting set of emails sent to me, ostensibly by marketing. Apparently there's a different set of emails sent to others, and there's a negative response to that as well on MSO. Admittedly as a user with 100k + on Super User, and 80k+ on Meta (A good chunk of that is hopefully sharing the knowledge of a decade of using the Network.), I probably am in a minority but... I had two emails on how to use search (one per account - we'll get to that). 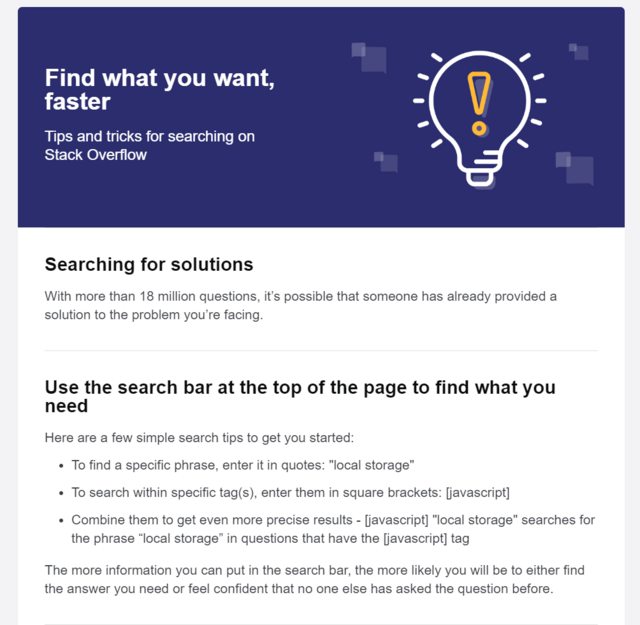 There's a perfectly good, organic set of hints on how to search. There's help for searching. We're often told to be less condescending to new users. Maybe its just me - but the mail about feels almost like we're talking down to folks, as if they don't know how to use search - even if the dupe finder tends to work better.

Since I have two accounts here, one under a gmail alias, I got two emails each with a different footer

Yanno? This is fine. I do get SE needs to try to promote its paid products. I do know about it, I guess, being a moderator and all

Yes, we know who is the self professed worst coder in the world. I'm not sure why its in an email footer, or what the benefit is. At least with the other one, it might "sell" teams to a casual user.

If it's an A/B test... I wonder how the responses are taken.

Considering the examples given, I'd guess they're written for a programming audience - and I'm 'merely' technical, and lots of folks who use SE are not and can use search, could we consider tone, what's getting promoted and the audience in future marketing emails?

38
Why am I receiving marketing emails from SO when I have unchecked every option in the email settings?

236
Feedback Requested: Design-Independent Graduation
381
If you're gonna talk Politics, you must respect those who disagree
826
Net Neutrality and Stack Overflow / Stack Exchange
123
Control the types of email you receive via our new Email Settings feature
333
Brace yourselves: The GDPR is coming!
264
Let's hold language in comments to the same standard as posts
739
New Feature: Table Support
405
Swag is coming back!