The review badge progress indicator shows a badge I already have

... and it tells me that I need a negative number of reviews to get that badge. 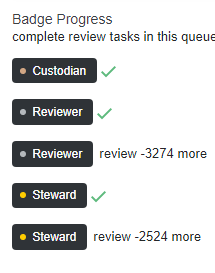 Also reported by user Dharman in SOCVR: It looks like I can get a silver badge for review if I only review -2372 more

And here is one from SFF from Mithical: 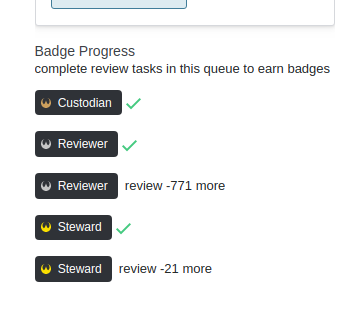 Just to be clear, this is not a case of me tracking badges or missing badges for other queues. This is what my badge progress looks like for /review/low-quality-posts/stats here on MSE: 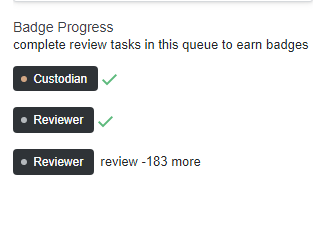 (sorry for not having done enough reviewing there)

There is no gold badge there.

Can this be fixed?

This is fixed. This bug was introduced through a typo in a dark mode fix PR.

The missed closure of the tag closure means </p } else { <p> was interpreted as a the tag closing by both the Razor parser the browser.

As a result, users who had earned the badge got the following rendered DOM:

As the reviewer of the PR, this one's on me. I feel like the reason both I and the author missed this was that it fails so subtly for users who haven't earned the silver or gold badges, omitting them rather than emitting incorrect HTML.

Not the answer you're looking for? Browse other questions tagged bug status-completed review badge-progress .

250
Badge progress reports
54
Indicate the color (bronze/silver/gold) in tag badge notifications
526
The current review system encourages fake reviews; some people upvote everything rather than actually fixing problems
4
Double the review limit once the gold badge for the queue has been obtained
68
Can't track Tag Badges without 20k rep?
105
What criteria should we use to determine which review queue indicator a site will have?
29
Can we enable tracking a badge statistic even if you already have the badge?
147
Improving the Review Queues - Project overview
222
Improved experience for users with review suspensions