I submit to you the following quartet of indisputable facts:

So I propose the following indisputably fantastic feature request:

Instead of that usual boring grey downvote arrow turning orange, a little animated Crono sprite coming from offscreen to beat the living crap out of the question's (or answer's) score, dealing it 1 damage and reducing its HP accordingly.

Instead of closing a question, Crono could fly down and use his special Confuse attack against it, leaving it injured and defenseless.

And for the coup-de-grace, deleting a question, Crono will appear out of nowhere and cast his ultimate attack, Luminaire, against it. Not even Lavos can stand up to the awesome obliterating power of Crono's Luminaire attack.

This new feature will make Stack Overflow much less boring to use and will draw in the retro-SNES programming crowd which, according to my made-up-just-now statistic will draw in at least 25% more totally rad programmers: 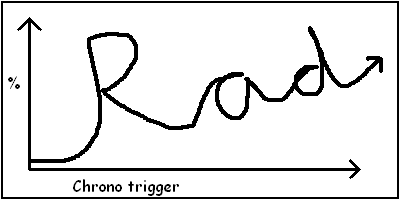 These new programmers will be naturally good at answering concurrency questions because they are easily able to grok the temporal distortions and causality loopholes that are commonplace in multithreaded systems.

Are you going to let Lavos destroy Stack Overflow? No! Help Crono help you, no matter what time it is!

I don't know who that fancy schmancy "Crono" guy of yours is, but do you remember this guy: 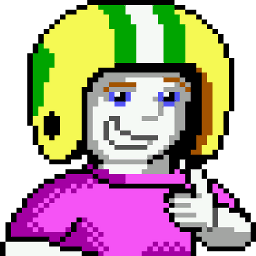 Here's the Greasemonkey script to have Commander Keen help you out with downvoting:

In case you're not brave enough to try it out, or too nice to ever downvote, or not greasy enough to have a monkey installed, here's a crappy screencast to give you the idea.

I think this is a very good idea.

This kind of thing should happen on (seemingly) random days. Much like google doodles :D

We can have a flock of birds doing all the heroic deleting and downvoting and closing on twitter's birthday.

I'm not necessarily against making the site more entertaining.
But it is quite engaging as presently constituted.

This idea clearly isn't entertaining enough, being almost totally focused on the voter/editor and not the recipient. So, I think the recipient of the votes/edits should also get some screen candy. Perhaps, for example, when they receive a downvote a little animation should cross out their old score, write in the new one, then blow a raspberry. I nominate Frog for this role.

On a serious note, I hope SO will not have any animation with bright multi-colored characters or flocks of birds. When I am programming, I am not bored at all, and I don't want to have any distractions. Right now the design is extremely elegant and usable, and extremely fast, and I'd rather see it stay this way. If anybody is into plugins, no problem; and I love Commander Keen too, but you know, less is more.

Not the answer you're looking for? Browse other questions tagged discussion voting user-interface fun .

66
Careers 2.0 Featured Listing: Web company needs successor for retiring unicorns
51
What third-party tools are there for the trilogy websites?
39
I do not feel like I am "winning" when I am voting
6
What's the etiquette on downvoting every wrong answer to a given question?
5
Autovoting algorithm
-5
Meta-SO Community: Please stop down-voting legitimate questions
12
How to vent on Stack Overflow without resorting to personal attacks of character
5
Should third party tools thread link be added to the FAQ?
0
World of Sta[ck]Craft!
1
Stack overflow needs moar bling
See more linked questions

33
Problems with Stack Overflow's reputation/point system
8
Moderator election voting page "not useful enough"
8
Area 51, new voting system - results
1
Why is Stack Overflow's search box only big enough for two or three words?
283
What is Stack Overflow's business model?
72
Why is voting removed from new review system?
970
Firing Community Managers: Stack Exchange is not interested in cooperating with the community, is it?