What does "deleted" / "undeleted" mean in a question about DNS on Web Applications? Is this related to a migration rejection? [duplicate]

Why does 1.1.1.1 not resolve archive.is? was migrated to Super User but then it was returned to Web Applications. Then it shows that it was "deleted" by a diamond moderator but later was undeleted by a now-former employee.

I assume that the question was migrated for a second time but the migration was rejected because the diamond moderator mentioned that he didn't know why the question history shows that he deleted the question.

While the question was discussed on Meta Web Applications there wasn't any explanation of the last "undeletion". 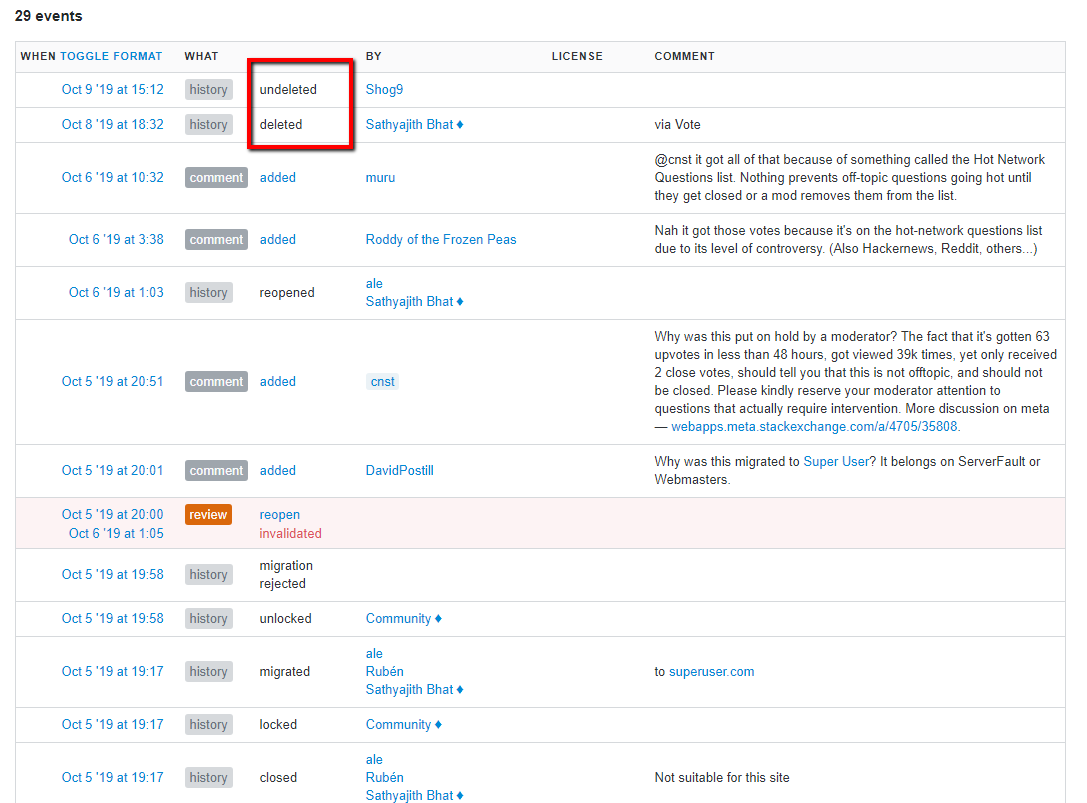 This is the current body of the referred question

There wasn't any explanation of the last "undeletion".

Per mod making a comment on this very meta question above, the original was deleted by mistake yesterday:

I didn't delete the question - not sure why it's attributed to me. I've asked the question in the mod chat and sent an email to developers to check in on this. – Sathyajith Bhat♦ 16 hours ago

It has since been restored earlier today.

Hopefully, this is the end of the saga.

Source Why was archive.is question deleted?, answer by cnst

And this is what the (former) developer, Shog9 said:

I checked the logs on this to make sure, and did a bit of experimentation to see if I could reproduce.

The moderator who deleted this was handling flags from the mod dashboard (the post you reference had a pending flag at the time). They'd expanded a preview on a previous post and then deleted it, after which they deleted both the question and another unrelated comment within 1 second.

Items on the mod dashboard shift in position as flags are handled; this is reasonably predictable for most flagged items, but when a preview is expanded (to allow a moderator to view the whole post) the vertical size expands considerably and so the resulting shift when it is removed becomes much less predictable. An errant double-tap or mis-aimed click could easily explain what we saw here.

I was unable to reproduce this by handling flags in a similar manner, provided I was slow and deliberate in what I clicked.

Source Why was a moved question deleted? Moderator to whom deletion is attributed claims they didn't do it, answer by Shog9

Not the answer you're looking for? Browse other questions tagged support deleted-questions .

7
Why was a moved question deleted? Moderator to whom deletion is attributed claims they didn't do it

503
How does deleting work? What can cause a post to be deleted, and what does that actually mean? What are the criteria for deletion?
63
"Duplicate of...[deleted post]"
211
What can I do when getting “This question body does not meet our quality standards”?
124
Community-led deletionism: a protocol for sanity
9
Was this an appropriate use of moderators' binding deletion?
7
Why was a moved question deleted? Moderator to whom deletion is attributed claims they didn't do it
970
Firing Community Managers: Stack Exchange is not interested in cooperating with the community, is it?