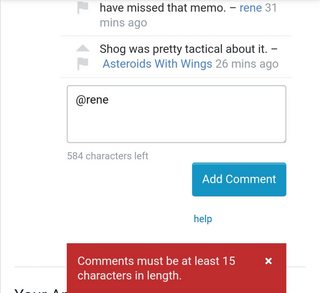 The sorcery that comes into play here is the famous ZWSP (Zero-Width Space) character. On the first image I inserted enough of them to trick the character count into thinking that there was actually enough text there, so it started counting down the remaining characters.

This is not a duplicate of Comment character counter does not trim, while the server does. That is a bug report that was status-declined by The Great Jeff Atwood himself; this is a feature request to reconsider that decision.

You could say that is the end of it all. But...

Obviously it has people fooled every now and then, as it just fooled me today. I find it very confusing to see a character count, which is later contradicted with an error message.

Can we make both character counts, the number of characters remaining/to go and the one for the error message, correspond?

As a comment on the canonical question points out adding .trim() in the code would most likely suffice. This would still leave one error remaining, that of stripped @replies, but that is a whole different regex I'm not demanding to be slain.

12
Why do I keep getting told I posted less than 15 characters when I posted more than 15?
14
Comment character counter does not trim, while the server does
-1
Not able to post a Comment
2
If a user name is long enough, we can comment anything to that user
-3
Comments don't count characters correctly
2
Count below a comment is misleading
-1
Should the comments message have trim end applied?
4
Inconsistent Input Validation
0
Short comments delimited with spaces appear to be above the character minimum
0
Comment char limit does not accurately show if enough characters are in the box
See more linked questions