Blue tag badge message can get misaligned on small screens/windows

Here it says that the post was reopened by a bunch of community members, including this one. And right next to that user's username is the feature-request tag with a yellow circle in it.

Hovering over the feature portion of that word makes that blue message about it pop up, yet it is misaligned. 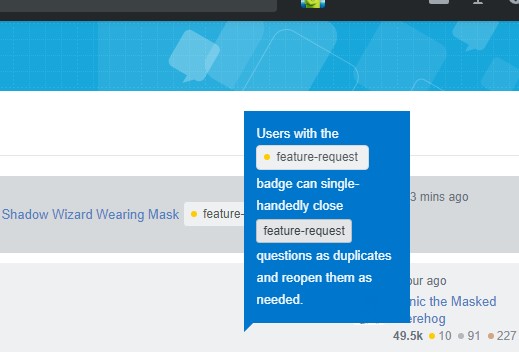 When I hover my mouse over the request portion of the tag however, the same message does appear, but it flashes since the message is covering up that part of the tag. Unfortunately I do not have time to make a gif of it.

However, I think that's because I use chrome in a smaller window, because when I open the window in full it is no problem.

It might be a meaningless bug to fix, but if someone browses here on a device with a small screen he is likely to encounter the same problem too.

Maybe the message should be programmed to shift itself to the right/left a bit if the screen appears to be too small or something. I made a mock-up of what it might look like, I apologize for the bad photo editing.

Obviously, the current solution is to just use a full window. But it still might be worth looking into.

104
Tool for peer-reviewed no-bump mass retagging
70
Make Stack Exchange sites compatible to OS X Lion full screen mode
260
A real solution to ambiguous tags
111
Improving Tag Synonyms
9
What tools and techniques are used to test UI changes?
14
Tooltip banner blinking for question closed by the user with the golden badge in small screens
123
Responsive Design Themes - What can sites customize and how can they get changes implemented?
15
Similar questions feature STILL blinds me from seeing my own typing, unexpectedly puts links under my cursor. Is there any way to avoid this?