At the moment, any question that I check returns empty list of related questions. I see just a header called "Related" but no questions shown below that.

I have checked this on multiples sites and also while not logged in. (At the moment I do not have the possibility to try it from a different computre or from different IP - but maybe other will confirm whether they see the same thing, to check whether this is just my local problem.)

Here are some screenshots showing what the sidebar looks like. The first one is from Meta Stack Exchange: 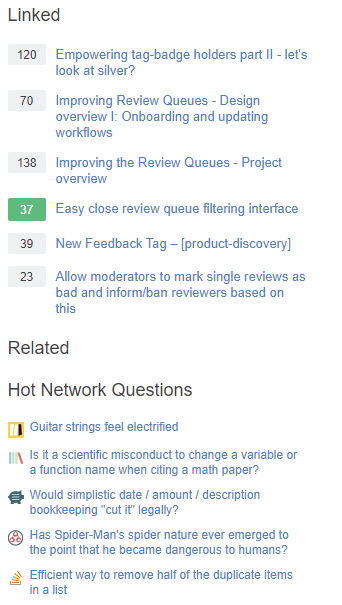 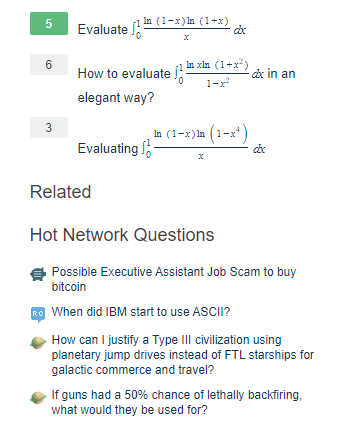 From MathOverflow (this site does not display HNQs in the sidebar): 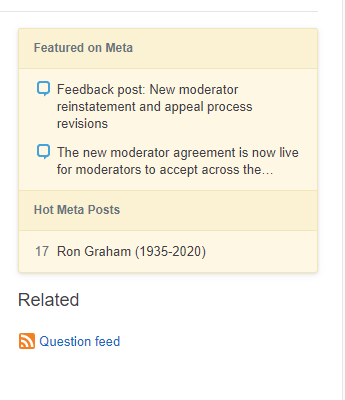 As part of the sidebar changes for related questions, there were 2 issues here, which we didn't understand until today.

Number 2 has been fixed and I kicked off rebuilds for 1 (they should be completed by the time this is posted).

For anyone more curious about the technical bits of "on"/"off" here ("new"/"old"):

We went from caching full HTML strings for related questions (for 5 minutes - this was the "off" position) to querying it live every page load ("on"). Realistically, that cache is hit so little there's not a huge volume difference in queries. Only in hot or homepage questions is there a volume increase.

The tradeoff here is more often querying for a simplified cache, a lot less memory usage, and a generally healthier gen 2 state in our ecosystem (we're wrangling some not-compacting-as-much-as-we'd-like issues). In tuning this, we also found that:

Overall, these are still changes we're going to make, but some bits external to this answer are in play on the timeline. We were close on having more monitoring metrics up in our SignalFX system, so I paused the deploy here (turning the flag back "on") while we got those metrics deployed (thanks Dean!), the dashboards setup, and some decent "before" recordings before we turn this on. We had all this data before in SQL to explore...but metrics makes it even easier to compare.

Anyway, that's a short rundown of what happened here and why. I hope it's helpful!

Not the answer you're looking for? Browse other questions tagged bug status-completed related-questions .

9
Where has the “Related questions” feed gone?
18
The "Related" section in the right sidebar is now completely missing for new questions
15
2020-07-10 Happening again: Random pages across SE feel "dead", due to SE WebSocket misbehaving: sometimes connecting, sending heartbeat, but no data

852
Can we have the ability to retract a close vote before it closes?
10
Using Safari 5.1.4, code blocks are empty on Stack Overflow
19
Questions on the Related/Linked Sidebar do not indicate if an accepted answer exists
537
How to avoid "Hot Network Questions" on the sidebar
11
Are chatrooms no longer shown in sidebar on main site, only on meta?
13
Recent problems with searching (no results or getting maintenance page)
580
We're switching to CommonMark
11
The header "Confirm subscription" does not render in email