Setting bounties for an arbitrary amount of reputation [duplicate]

Will this damage the ecosystem of Stack Exchange? Or do we have to wait for this?

Edit: to clarify this is not about increasing but about the freedom to choose what bounty you want to set for a specific question, which isn't discussed or answered in the suggested question.

Not having an option to choose an arbitrary amount as bounty is purely because of historical reasons. When the bounty system was first introduced back in 2009, there was a slider to choose the bounty amount with increments of 50 reputation. 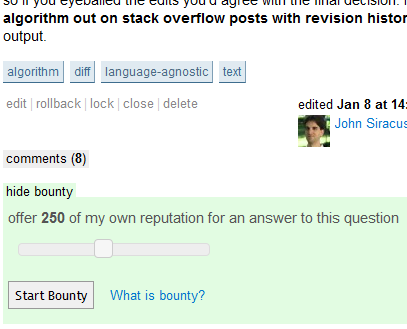 The reason for not having an arbitrary increment seems to me that it made the classification of different bounties easier.

And with the improvement of the bounty system in 2010, this feature was carried forward.

I don't think that it would be difficult to implement such a thing now but the only problem would be that we'll start seeing random numbers as bounty amounts not visually appealing (or may be it is just an acquaintance with the ongoing normal). However, the 500 bounty limit is justified, so as to not give a user, not well acquainted with the system, a large amount of privileges suddenly.

Bounties greater than a certain amount may give privileges to new users they're not ready for. Such an amount is a bit arbitrary, but Stack Exchange has set the limit to 500. Earning such a bounty directly gives you access to e.g. the review queues, but not editing and close voting (the latter at least on non-beta sites). As the Help Center says, reputation is a rough measurement of how much the community trusts you, not how much a single other user trusts you. Misuse of privileges (e.g. robo-reviewing) can be hard to detect in some cases, so it's better to prevent it upfront.

As for custom amounts below 500, it's simpler from a UX perspective to select a predefined value from the current list of 10, rather than having to type it manually. I don't see any additional benefit in allowing e.g. 75 point bounties. (Not to mention that auto-awarding such a bounty would give fractional reputation ...) The size of a bounty does matter on some large sites, but not that much.

Not the answer you're looking for? Browse other questions tagged feature-request bounties .

-46
Increase upper limit of bounty
22
Does the size of a bounty matter?

69
Contribute to bounty?
187
Gold Sportsmanship badge
119
Allow users to vote to close bountied questions
74
A user ragequit after bountying me all his rep, and I'm kind of creeped out by it
71
Do not implicitly award bounty to an answer that has been downvoted by the investor
418
Add an "I don't understand" option for review audits
186
Can we clarify to the OP that their question is not yet closed and the duplicates are only suggestions?