When reviewing an edit on Physics SE I noticed that an edit made to replace an image of mathematics with MathJax (the preferred choice on Physics SE) was not shown properly when the rendered output was previewed. 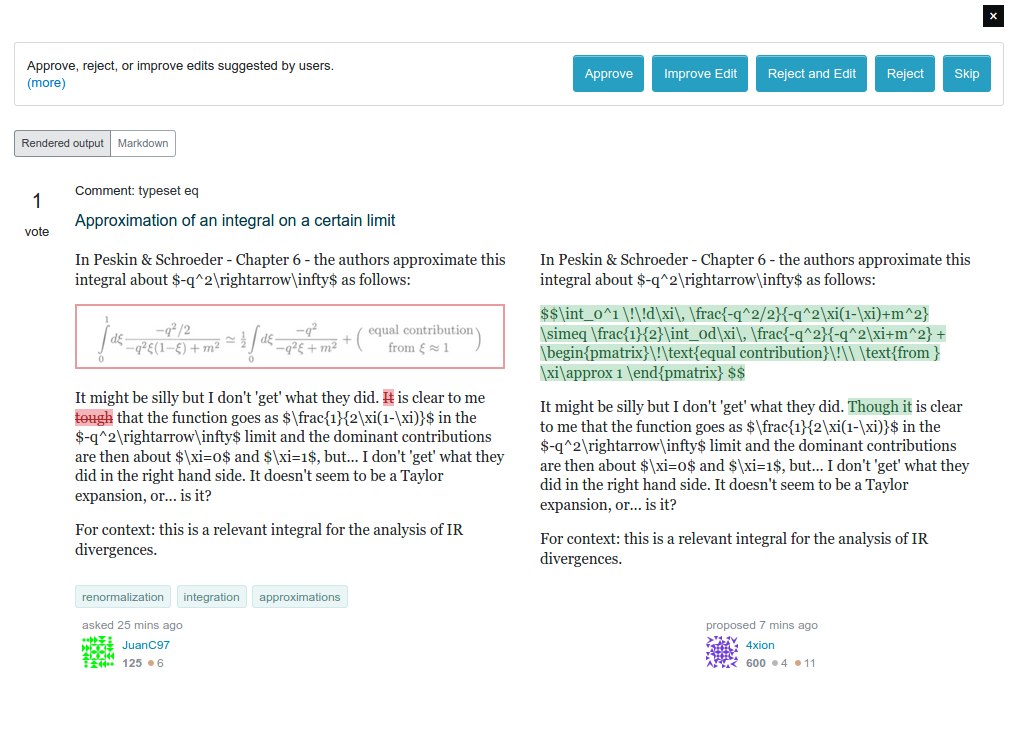 Note on the right the new edit version (awaiting approval or rejection) is shown in green, but instead of the rendered output being shown we get the "raw" MathJax code. It's extremely difficult in many cases to tell if the code is an accurate representation of the image it is replacing and we really need to see properly rendered MathJax in these approval dialogs.

Note we already get to see the "raw" MathJax when we select the "Markdown" option.

As MathJax is such a significant element of Physics SE (and other sites) it's important we get to see the rendered output, not just the code.

For completeness this was on Firefox 78.0.1 64-bit under Linux Mint 18. MathJax correctly renders on the main Physics SE site.

Note also that the issue does not affect the edit history which uses a different layout. That can view rendered and raw MathJax correctly. This issue only affects the review queue AFAIK.

Thanks to member Luuklag for showing me it is possible to add a link to items in the review queue, which I had mistakenly assumed was not possible.

This will be fixed in the next build.

There were a couple small problems:

Both of these issues had been resolved on the actual post revision history page, which renders similar looking but independently implemented diff tabs.

I did, however, find a separate issue on the revisions page that I fixed as well. Now that that post has been alive for a while, the revision that added MathJax (3) is collapsed. If you visited https://physics.stackexchange.com/posts/565310/revisions and your default diff view is "Inline" or "Side-by-Side", expanding 3 would show you the raw MathJax instead of rendering it. Switching to another diff style and back would trigger the rendering. It's a similar deal to before, it just needed a call to styleCode() after the revision was inserted into the page.

Not the answer you're looking for? Browse other questions tagged bug status-completed review suggested-edits mathjax .