Can we please clean up the new tooltips around the upvote/downvote buttons?

This question focuses on the UI of the new tooltips (not the text), and it has the following sole focus: Completely undoing the recent change.

Just simply undoing this will be a single change with a single focus.

I originally posted this as an answer to this other question. However that question ended up going in a completely different direction, which basically just had to do with the text, with basically nothing to do with the UI. So whereas that question became about the text, I will now post my own equivalent about the UI. If this is a concern about duplication, let me know, and I'll delete the answer on the other thread to keep this question open.

Regarding the new tooltips around the upvote and downvote buttons, I strongly suggest changing the look and feel of the UI back to before. 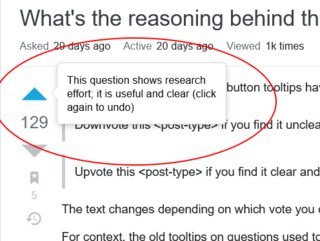 The older style of tooltips that this site has used work great. In particular, they are unobtrusive. For example, there is a small, roughly 1-second delay before they appear. And even when they do appear, they are small and do not grab all attention away.

Unfortunately however, these new ones tend to look and feel more like pop-ups. They show instantly every single time the cursor hovers over one of the upvote/downvote buttons, they are much larger than before, and they immediately steal all attention from the rest of the page, over and over again.

On another question, I mentioned a few common reasons that these sorts of notifications are really a bad thing. I will use a similar, yet slightly different list here:

Regarding reason #2, who on this site does not know what an upvote or a downvote is? This is extremely common and standard all throughout the Internet, and it is only a slightly different expression of the same mechanism as likes (such as on a Facebook post). Yet when blaring notifications instantly show every single time an upvote or downvote button is hovered over, it constantly distracts the user, and it creates stress.

If you really feel this information must be present, then please at least revert back to the standard, much less obtrusive tooltips, which have timed delays and do not use excessive space and glare.

Personally I feel like I'm using these sites less now, specifically as a result of this - yes, small, but nonetheless constantly recurring - stress factor. If not that, I'm probably at least casting fewer votes now, because of this being almost kind of a deterring factor.

If you feel this information is necessary, a perfect example of how these tooltips can be improved is as below:

This is the standard tooltip that is used not only on SE itself, but also all across the Internet and desktop applications (with minor variations). It contains a timed delay, and its layout is also unobtrusive. If you don't want to get rid of the upvote/downvote tooltips entirely, then I strongly suggest switching them back over to this standard, heavily user-accepted type.

Before the change, there was a standard HTML title, which means the browser decides how to display the tooltip.

While this was fine and easy to get used to, it had no way to be customized. Sites with their own design sometimes need to change the look of the tooltips too, and using only the standard title, it's not possible.

Hence, I do support changing to custom tooltip, and against reverting back to the standard title.

That said, I'd also support changing the design of the tooltip, so if you have concrete change in mind (e.g. font, color, etc.) feel free to suggest.

Not the answer you're looking for? Browse other questions tagged discussion feature-request user-interface tooltips popups .

138
What's the reasoning behind the vote button tooltips having changed?
49
Please add a delay to the hover tooltips
24
Let's remove the "Get updates..." notification
17
Can we please remove the review queues pop-up?

863
Allow an edit to notify downvoters: "I think I've fixed the issue now - please check"
921
Why aren't people voting for questions?
1491
Fastest Gun in the West Problem
2788
A Terms of Service update restricting companies that scrape your profile information without your permission
827
Net Neutrality and Stack Overflow / Stack Exchange
494
Congratulations to our 29 oldest beta sites - They're now no longer beta!
2502
Firing mods and forced relicensing: is Stack Exchange still interested in cooperating with the community?
2253
Stack Overflow is doing me ongoing harm; it's time to fix it!
138
What's the reasoning behind the vote button tooltips having changed?
49
Please add a delay to the hover tooltips