Which moderator election was decided with the smallest margin?

How 'close' can ♦ moderator elections on Stack Exchange get? Has there been an election where a single vote would have made the difference? The Spring 2018 election on Stack Overflow was quite close, percentage-wise; the final difference between the remaining candidates was 17 votes (only 0.05% of the number of ballots). One of the most recent pro-tempore elections, on Drones Stack Exchange looks to have been decided by 1.6 vote (a fractional number; this is a property of the STV system).

Inspired by I appealed against a suspension, but the appeal is still pending. Am I going to miss the election? 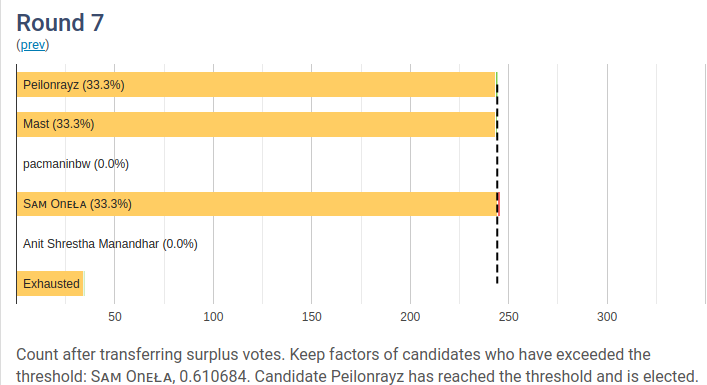 This is even closer than the other answer by Rand al'Thor since the difference in voting percentage was less than 0.1%, versus 0.2% in that case!

In the absence of any mention of any other election even remotely as close as this, I'm going to propose that the likely answer is the 2020 Biblical Hermeneutics moderator election, which finished today (27 October 2020). It was a three-slot graduation election, with just four candidates. In the final round of vote counting, the difference between the 3rd and 4th candidates was just 0.2 votes, with the losing candidate just 0.15 votes below the threshold. There were a total of 110 users voting, making this difference 0.2% of the overall electorate.

This week we had two very close elections, and unlike the case of the April 2021 Code Review election in which the race was close between 3 users competing for 2 positions (and eventually it was decided that all three of them would become a ♦mod), both of these recent July 2021 elections were close between 4 users competing for 3 positions, and the 4th place candidate was within 2% of the 1st place candidate in both instances! 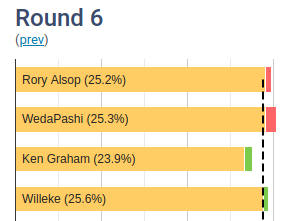 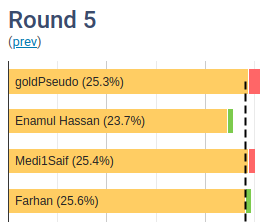 Not the answer you're looking for? Browse other questions tagged support election .

-6
I appealed against a suspension, but the appeal is still pending. Am I going to miss the election?

755
Which tools and technologies are used to build the Stack Exchange Network?
261
How are moderator election votes counted, in plain English?
13
Should the primary phase of the election be eliminated?
18
SE Election ballots with unexpected values
275
Let's disallow moderator nominations from people who've been suspended in the past year
25
Allow us to rank all the candidates in a moderator election
72
Experimenting with Pro Tempore elections
981
Firing Community Managers: Stack Exchange is not interested in cooperating with the community, is it?
56
Moderator Elections functionality: voting UI, commenting and flagging