How are the top tags on the profile page selected?

The profile page has a section called "Top tags". Several tags are displayed there. (I have only seen six, I am not sure whether it is always the same number.)

Question: How are the tags displayed here chosen?

Originally I thought that they are the tags where the user has the highest score. However, this is not always the case. For example, Qiaochu Yuan on Mathematics has soft-questions among his top 5 tags, but this tag is not displayed there.

This is what I see when viewing this user's profile:

And here is the list of his top tags: 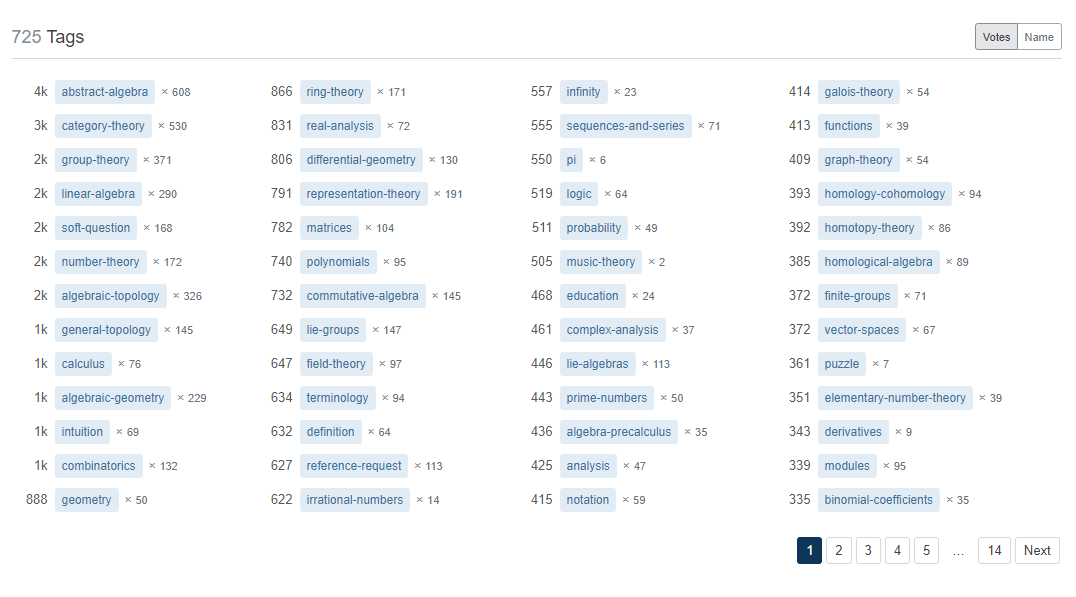 EDIT: It was suggested in one of the answers that soft-question is never chosen among top tags, since it is a meta tag. Here is example of a user who has this tag shown in his profile page.

The tags shown are picked from the top 9 tags by non-CW post count (so questions and answers, but not counting posts with CW (Community Wiki) status), then ranked by their score (total up-votes, minus total down-votes, only for the non-CW posts, ties are broken by post counts), and the top 6 tags are shown.

Today, for the specific user you see, the 9 tags by post count are:

They only have 146 non-CW posts with the soft-question tag, placing it at #10 and just outside the above top 9 tags. So it doesn't matter what their score is for this tag, it simply doesn't have enough posts to make the cut.

Once you then sort the above 9 tags by score and pick the top 6, you get:

and the algebraic-geometry, ring-theory and representation-theory tags are not shown. Of course, the UI shows you the total post count with CW posts included.

I've created a SEDE query that demonstrates this.

Take into account that the SEDE data set only updates once every week, and was last refreshed yesterday (Sunday 2020-08-09), while the Top Tags update frequently. Your screenshots were from yesterday so the SEDE data set counts should be very close to what was used to generate the listing of tags shown.

For a given user and site, the query shows you their tags, their tag score, post count for each tag (first column with CW posts, the second optionally without CW posts, used for ranking), and their correct rankings by tag score. The first 9 rows are tags that are considered, by post count, the rest of the table are the tags that are not considered as they fall outside of the top 9 by count. All rows are ordered by tag score, but within their respective groups.

I've included extra parameters in the query, to play with how the algorithm works. You can alter the number of tags considered, and you can set the countcw parameter to 1 to include Community Wiki posts when ranking the top 9 counts (tag scores always filter out CW posts and only consider scores for answers).

Qiaochu's tags are very interesting here, because their numbers, as they stood yesterday, demonstrate the parameters I named very nicely. Change either to see how the results might change:

To figure out if CW posts are included I actually looked at the results for your own account:

Only when you disregard CW posts and put the cut-off at the top 9 posts does the query reproduce your exact tag list:

which, after sorting and cutting, then becomes:

Here limits is the wild-card; it would rank a shared 9th place together with functional-analysis if CW posts were not filtered, and the latter has a higher tag score. But when CW posts are filtered, there is no tie for 9th place (by post count), limit makes the cut, and ends up at 6th place when those 9 are sorted by score.

By percentage, the number of posts with that tag out of the total, together with the score.

So they are sorted by the post % value you see in your screen shot. This seems to be a combination of the total number of posts in a tag and the score, I couldn't find an exact description of that value but you can hover your mouse over it for a description of what is included for that specific user..

Not the answer you're looking for? Browse other questions tagged support tags profile-page .

25
How is the 'Score' on the Top Users page calculated?
8
What tags would be considered "meta-tags"
14
Would it be possible to alter the tag blacklist to work alongside the tag synonym system?
6
Finding Reputation from Tags
7
Why does the Tags section of the profile count questions asked, but not their score?
1
Wording in tag mouseover on user page is confusing

283
Keyboard Glyphs
258
A real solution to ambiguous tags
144
Tag scores have not updated; script did not run
131
Profile Page Makeover, Part 3: the Prototype returns
973
Firing Community Managers: Stack Exchange is not interested in cooperating with the community, is it?