We have seen a lot of discussion around explaining downvotes over the years, and not all were well received. We even got to a point that we now have a separate question about why these topics are ill received.

With the release of the articles feature on Stack Overflow Teams I saw an opportunity to raise this topic once again. But this time with a suggestion on how we could implement feedback on downvotes while remaining anonymous.

In the new articles feature there is a way to provide feedback to the post owner directly and privately. As was demonstrated by this screenshot I took from the blogpost: 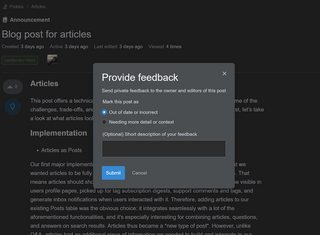 With a few adaptions I think we could easily repurpose this into a feature to give feedback when downvoting. (I am explicitly NOT saying that this should be obligatory!)

How could we do that you ask?

Well, we make it so that the default user who sends the feedback is User -1, also known as Community♦. simply don't show your name to the post owner. As Catija pointed out in the comments, moderators need to be able to trace who provided the feedback in case anyone abuses the feature.

Optionally you could choose to have your name attached to the feedback you send.

Giving feedback in this way, without leaving a public comment, makes sure that you are not traceable as the poster of the feedback. Being traceable as a downvoter is currently the biggest downside of giving an explanation as why you downvote, as it opens you up to revenge downvoting.

So are we going to see this screen every time we downvote, making downvoting a two-click process?

I think that would be a really negative experience, as a lot of times you don't feel like leaving any feedback, especially here on Meta. On the other hand new users could really benefit from getting feedback on their first few posts. Hence I propose we make the feedback pop-up automatically when downvoting a post from a user with less then 100 reputation (the association bonus level). In this way we can, to a certain extent, remediate the unwelcoming feeling new users get when their posts are instantly downvoted without them knowing what is wrong with them. Of-course the dialog should come with a cancel button if you don't feel like leaving any feedback.

For posts from users with more then 100 reputation there should just be a button to open the dialog. It could be located right under the downvote arrow.

Will I need to type in the same reason every time I give feedback?

That would be a cumbersome thing to do, I suggest we take a couple of canned reasons. Perhaps we can simply repurpose some close reasons for this. Together with a free-form text field this makes for a quick way to give meaningful feedback. Reading the answer by GhostCat and the comment from Catija I think it would be best to not implement a free-form text field, as this gives too much opportunity for abuse that is hard to catch.

With this anonymous way of providing feedback I think we can optimize the new-user experience without too much cost to veteran users.

As someone listed this question as a duplicate of the canonical question, that I referred above, I'll try to summarize how this is different from the arguments raised in the answer there.

This question does not show any research effort, it is unclear or not useful

There is a lot of room for improvement. The message here is overly broad, and hidden in the tooltip. Who goes to downvote his own question to see this message? You don't want your mouse near that button on your own post. So wouldn't a message straight in your face be far superior in conveying the message?

The other two arguments are other discussions I don't feel have a place here.

Downvotes that come without explanations do feel bad, and any well thought idea to reduce the number of times exactly that happens is (imho) worth looking into it.

The key thing I see: anonymous is tempting, but also the biggest (potential) issue in my eyes. Why? Because a lot of people aren't very good at giving feedback. The fact that other community members see my comments, and gave me feedback about it, or plain flagged them: that taught me many important lessons. Even with years of experience around Stack Overflow, I still get comments on my comments that help me to improve my actions.

In general, what I can see on Stack Overflow: people got much better on giving constructive, friendly feedback over the last 2 years. But there are still outliers, and I worry what would happen if such a guy has a bad day. Happens to the best: sometimes, after reviewing "bad" newbie posts for 60 minutes, you really lose it, and instead of just stopping, you start treating the next "culprit" in ways that aren't okay. Now imagine that to happen anonymously, and worse: hidden from the community.

What makes that part even worse: assume these anonymous messages go mainly to total newbies. Such folks might not understand that they can flag rude feedback. They might just feel harassed, and turn around for good. And nobody else notices.

Giving feedback out in the public is a crucial element of our culture. I think it is not worth giving up on that.

So: a mechanism that encourages to give feedback: great. It might even be nice to not expose the user writing the feedback. But: the feedback should still be visible to the community, so that other users can come in and flag rude content. Do not rely on newbie users to be able to "protect" themselves!

As you have concluded, feedback with a freeform text field would not be a good idea. You then propose canned reasons, like we already see in the closure and flagging dialogs.

Here are the canned reasons we already use:

There is the feedback. I believe rather than making veterans go through a cumbersome process, newcomers could receive a once-in-a-lifetime notification upon their first received downvote. The notification could lead to a help page on downvotes.

My reasoning here is that canned reasons alone will not help newcomers make better posts. Veterans who take the time to explain in comments and meta how things work, and newcomers who take the effort to read the tour and help and/or learn the ropes by trial and error are what leads to users who ask great questions and give great answers.

Based on the concerns I've heard so far, I have a proposal.

Let's offer a vote-reason dialog that has the following characteristics: 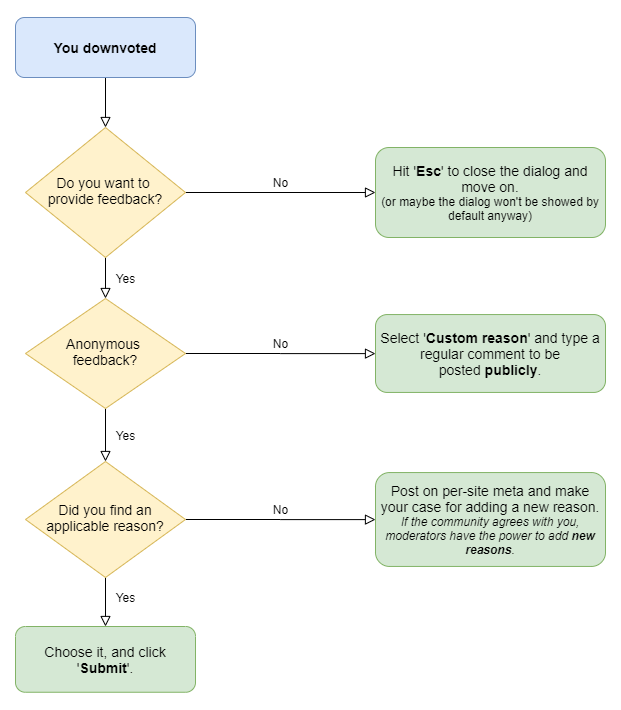 1 This is what I personally prefer. I do not think it will slow things down but we can go with the second option if that's what the community prefers.

167
What about the community is "toxic" to new users?
187
Can we clarify to the OP that their question is not yet closed and the duplicates are only suggestions?
86
Why isn't providing feedback mandatory on downvotes, and why are ideas suggesting such negatively received?
39
Allow same user to add multiple links as possible duplicates
42
Tell answer-author when the question is being voted to close
3
Have regular users link less-prominent duplicates to the best one by encouraging referral answers?

1234
Encouraging people to explain downvotes
857
Can we have the ability to retract a close vote before it closes?
876
Allow an edit to notify downvoters: "I think I've fixed the issue now - please check"
1507
Fastest Gun in the West Problem
1856
Could we please be a bit nicer to new users?
1261
Don't throw away all votes when a user is deleted
2805
A Terms of Service update restricting companies that scrape your profile information without your permission
2528
Firing mods and forced relicensing: is Stack Exchange still interested in cooperating with the community?
2294
Stack Overflow is doing me ongoing harm; it's time to fix it!
765
New Feature: Table Support