Some sites have hundreds of rooms with almost the same title; for example, there's an entire page of rooms on Mathematics.SE that were created from the comments on a specific question or answer: 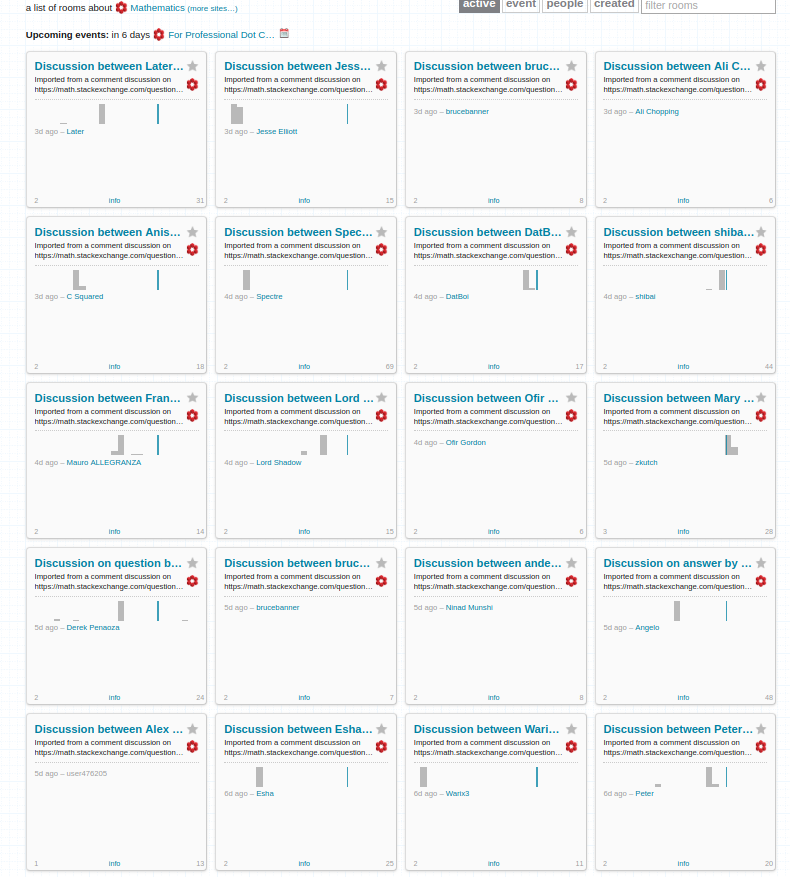 Most of these rooms end up getting frozen, because they are only relevant for a very specific question or answer. There's 678 pages of rooms on Mathematics.SE, meaning that there's thousands of rooms in total:

On Matter Modeling SE, we have chat rooms specifically for "extended discussions" that arise from excessive commenting on a specific question or answer: one chat room for each major matter modeling software (e.g. GAUSSIAN, PHONOPY, ASE, LAMMPS):

Some of these rooms began with a name like "Discussion between userA and userB" but after the discussion about the question/answer was finished, the room did not have any other use and eventually would have got frozen or deleted.

We would like to avoid accumulating thousands of frozen rooms that are hard to search through later on.

Already one room was created which we had to "manually" merge into the GAUSSIAN chat room:

Even though we could do this manually, there is now one extra room appearing in our "frozen/deleted" rooms page, which might not seem like a big deal, but we would like to prevent that from happening before we reach 600+ pages of frozen chat rooms as is the case on Mathematics.SE.

A similar situation occurred on Law.SE where 5 rooms were created just for discussion about 2 users, about a single Q/A thread.

When a comment chain gets long and users are prompted to move to chat, instead of making a brand new room every single time, I wonder if it could be made possible for users to be directed to a specific chatroom based on the existence of a specific tag.

Prior research before asking this question

Folks seem to be focusing on the Q&A->Chat angle here. Which is... Understandable, but... Has never worked particularly well. Comments have needed a redesign for 8 years, and no amount of delicacy when it comes to the use of chat will make that less so.

Also... That concern is entirely irrelevant to your suggestion. See, the change you're suggesting aims to improve the opposite angle: the ability to move from Chat->Q&A...

For as long as SO/SE has been around, I've encountered a distinctive pattern in places where folks gather to chat about a topic:

This happens to a degree in SE chat, but... I'd bet it happens even more often elsewhere. After all, it was happening in IRC before SE's chat even existed. I see it happening in Matrix & Slack channels, on Discord servers... I'm sure it happens in places I've never even thought to look. And of course, it does happen in SE's chat, but... Given there's not too much facilitating it in topic-specific rooms, it happens a lot less than it could.

It... Probably happens a lot less than it used to.

The purpose of Chat

[...] a space for people who love the topic to meet, discuss, and collaborate in a different way. It would foster community, and be complementary to both strict Q&A;, and meta-discussion.

Notably absent from that charter is "a place to dump comments that are cluttering up a post so that folks can still read them later". There's nothing wrong with doing that... But that use doesn't really play to Chat's strengths; it might complement Q&A, but it certainly doesn't foster community.

Indeed... Countless abandoned rooms populated with snippets of conversation isn't a good sign for a "community" at all; rather than being a sign of socialization, it's more like a graveyard for it.

The value in your suggestion

This, then, is what caught my eye in your suggestion: it could potentially complement a pattern of human behavior that already occurs in chat systems, one which benefits Q&A and builds community by encouraging socialization. It might not work for the very largest tags on the very largest sites, but... Increasingly, the activity and growth is found in smaller, more specific tags anyway; providing the folks tending those little gardens with a way to engage and care for each other is something that could offer a lot for both Q&A and... Chat itself.

Chat, which has for so long been ignored and diminished, to the point where more and more people are leaving for other systems.

Chat, which was intended to foster socialization and remove that inherently human reason for seeking out other venues in which to share information.

Chat, whose deficiencies are increasingly driving folks toward other systems and away from any participation here at all...

...Chat, the red-headed stepchild of this endeavor, whose very purpose appears to have been forgotten.

Chat rooms, as implemented on Stack Exchange, are probably not well-suited to dealing with multiple problems at once. This solution probably works on smaller sites, but I'm skeptical that it would scale well.

An alternate solution to the clutter problem would be to simply treat rooms created from comment threads specially and not show them in the default view.

These rooms are unlikely to be of use to anyone not finding them through the comment thread they were created from, so why show them to everyone by default? Hide them behind a checkbox (e.g., "Show rooms created from comment threads").

This might need some measures to prevent abuse, for instance hiding real rooms by creating them from comment threads, but the hiding could also easily be removed for any room that crosses, say, 100 messages.

The implementation of such a button isn't smart enough to distinguish between comments focused on improving a post, comments discussing something controversial related to the tag, or comments doing neither of these two. While making chat in general, and also rooms for a specific tag, more visible is a good idea, putting people in specific rooms bases on the tags of a question will cause more trouble than it solves.

If I understood correctly, your argument is that having a lot of frozen rooms makes searching through them hard. Chat allows you to search all rooms for keywords said by users in rooms, (including frozen ones), just like it would allow you to search within a specific room. So, imagine all those 600+ frozen rooms moved into 6-8 other rooms: you'd still get the same amount of search results for a specific keyword. So, that wipes the argument that having everything in one room instead of multiple frozen rooms makes search easier off the table.

Now, for the additional problems this feature request introduces:

There are properly and improperly used comments. For proper comments, I agree with RyanM that chat rooms aren't really equipped to handle multiple problems at once. I see some downsides to redirecting all things tagged X to a specific room, especially if X is a bigger tag:

Implementing this feature will rob users from the ability to create a specific room, where they quickly can hash out some improvements to a post without interference.

For improperly used comments, take a look at some of the rules some 'tag' rooms on SO have set up (PHP, java, javascript, python): Most of these rulesets point out that in one way or another, discussions should stick to tag related things and to please avoid heated discussions. The help center article on the commenting privilege states that chat could be used to debate a controversial point (not comments, chat!), but how is this button going to make sure that:

Basically, moving comments to a chatroom based on a tag isn't smart enough to take all these things into account. That's why I feel it's better to have that button create a new room each time, instead of having random things drop into an existing chatroom where there's already existing activity. That way if users are discussing things that aren't directly related to GAUSSIAN on a post tagged GAUSSIAN, they can still move to a chatroom without bothering the people that congregated into a chatroom around the topic of tag GAUSSIAN. If the discussion was already heated or unconstructive before reaching chat, a moderator can simply freeze/delete that newly created room, without having to deal with picking out things from a chat transcript in an existing room and managing larger unrest in that room.

While I agree with the broader problem, I'm not entirely on board with the solution proposed.

Fundamentally the issue is that chat's used as a way to archive a conversation at a point of time, since organically, comment moderation is a 'leave it or prune it' system.

Putting these conversations in a single room by topic loses some of that context, even if the system threw in a link to the parent post as part of the process. We go from having silos of frozen chatrooms to specific chatrooms used as a repository of many different chat threads.

Of course the paradigm of 'keep/delete' reflects the intentional transitory nature of comments. In theory some kind of organic archival option might work, but this would be in conjunction with cleaning out comments. I suspect many users might be a little insistent on their posts being archived rather than deleted

This would to me be the cleanest way to avoid post specific chatrooms - and be a matter of having a 'view archived comments' link somewhere.

Not the answer you're looking for? Browse other questions tagged discussion feature-request comment-to-chat-migration .

112
Why is SE giving so much attention to the "be nice"-policy?
29
Feedback for The Loop - June 2020: Defining the Stack Community
4
How can I find an old frozen chat room, rather than create a new one each time?
10
Start a chat with OP before reaching the 10+ comment mark

626
Formatting Sandbox
193
Provide a tool for moderators to migrate comments to chat
133
Streamline moderators contacting users through chat
260
A real solution to ambiguous tags
163
Flags in chat are defective by design
829
Net Neutrality and Stack Overflow / Stack Exchange
2507
Firing mods and forced relicensing: is Stack Exchange still interested in cooperating with the community?
2258
Stack Overflow is doing me ongoing harm; it's time to fix it!