Why does the edit diff look like a link was removed though it is still clickable in the post?

The latest version of an answer (that I created and Community last edited) is not displaying or editing right. Instead, a version that still has a dead URL in it* is displayed both on the main page for the Q, and when I try to edit that latest version of my A.

*I think it's the next-to-latest version, which was by me, of 25 May, with https://developer.apple.com/legacy/library/documentation/Darwin/Reference/ManPages/man8/fsck_hfs.8.html still in it. 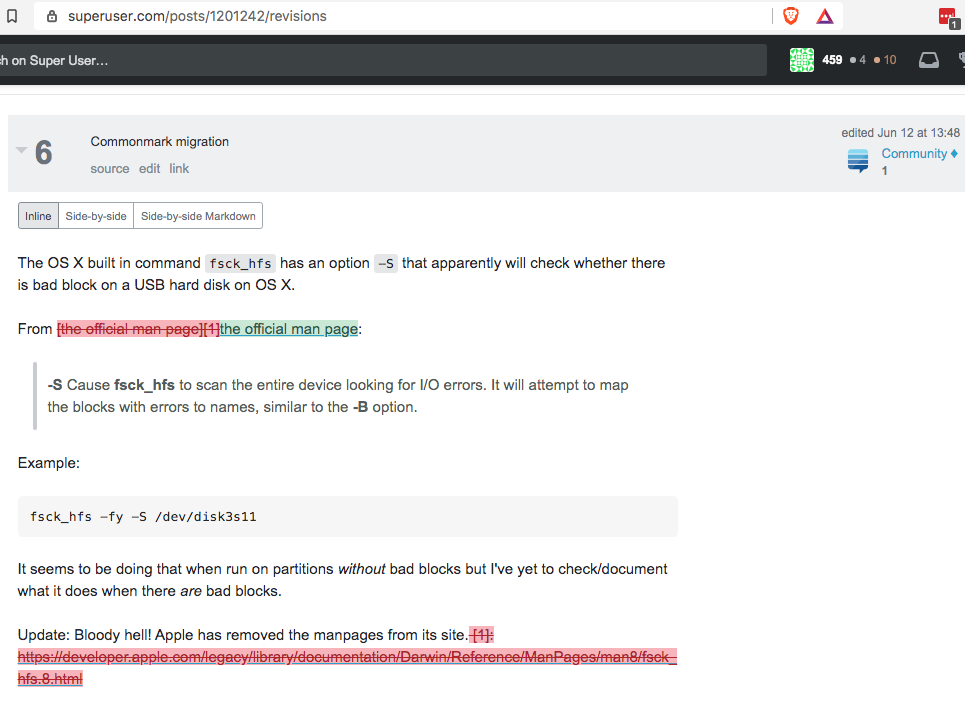 It looks like the dead URL is removed per that screen shot above.

But here below we see the dead URL is still linked to: (Screen shot from How to check whether there is bad sector on an external USB hard disk on OS X?)

When you first posted the answer, it displayed fine. However, since then the renderer changed, which broke the formatting that you had, causing the reference to the link to appear in the text. That's why the Community bot edited it: it was just making your post look the same as it did before, where the reference wasn't displayed in the post and instead was used to render the link. The revision history renders all revisions using the new renderer even though they were written for the older one, so it shows broken there since the previous text wasn't compliant with it.

Not the answer you're looking for? Browse other questions tagged support revisions-list .

0
Why was my post removed?
0
Cannot comment single post: comment box not displayed on click
830
What does “user was removed” mean and why did my reputation change because of it?
246
Why was the previous Code of Conduct FAQ (and all answers) removed?
15
Questions migrated more than 60 days ago no longer link to their revision history on the origin site (possible license violation)