Today, while typing an answer on Math.SE, I needed to use the factorial expression. While typing in my answer, I received the following warning:

DON'T SHOUT! All-caps posts are considered rude and will quickly be deleted. 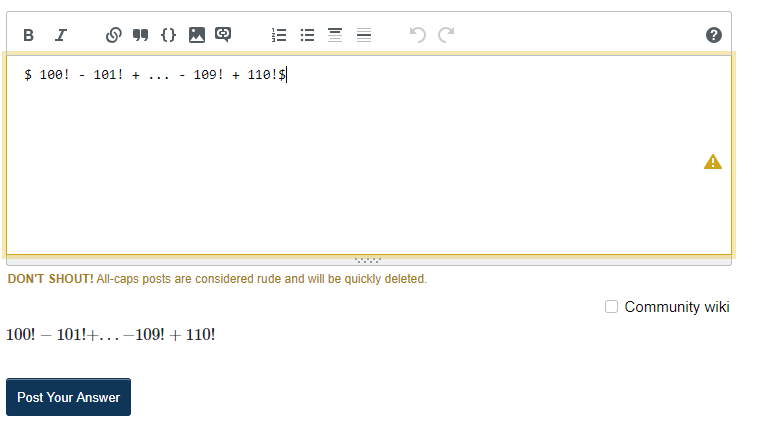 Surprisingly, there were no letters in my answer, yet it warned me about typing in capitals.

Discuss (if possible): the mechanism of the CAPS detection function.

Bug to be fixed: training the algorithm to read for real alphabets instead of the number of exclamation marks.

Further research (on Chemistry, Physics and primary Meta): it was found that none of them really respond to caps or the above expression. For that reason, I checked my bug again on Math.SE, and it worked again.

The third reference linked is stuck at evaluation and the bug has not been fixed. As per a comment :
This is caused by a blacklist entry for pattern ^(?-i:\P{Ll}+){15,}$, which matches 15 or more consecutive non-lowercase characters. Too bad you can't just use ^(?-i:\p{Lu}+){15,}$, since spaces and punctuation should not be considered to break the consecutive count. – Chris Jester-Young

The above report is definitely not valid now, look below: 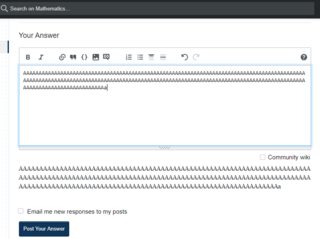 looking at the above, please note there is a small a. Now look at the below one: 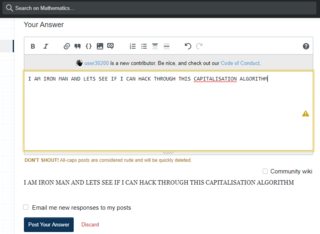 Now since it looks like it must be networkwide, here is an example of meta-stackexchange: 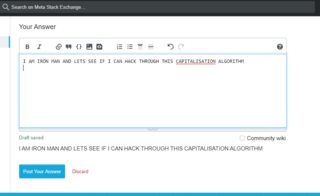 Update: After a bit of research on the S.E. network, I could not find any documentation to the warning triggered by the system. So before flagging a [bug] I would like to discuss how is the feature implemented and why is it site specific, i.e. only implemented on MSE and not on the sites namely physics, chemistry, meta stackexchange. The purpose of asking why is it site specific is that as far as I know, the backend code which can trigger such features makes it apply to the whole network.

302
The future of meta.stackoverflow and meta.stackexchange
404
Graduation, site closure, and a clearer outlook on the health of SE sites
534
The MIT License – Clarity on Using Code on Stack Overflow and Stack Exchange
176
Usability issues for first-time Stack Exchange users - a micro-study
352
Let's take a look at the interaction between staff and the “power users” of the network
2445
Firing mods and forced relicensing: is Stack Exchange still interested in cooperating with the community?
244
Summing up the main issues (The Story So Far)
481
To reach out: on Monica, the Lavender community, and the future of the Stack Exchange network
322
TLS 1.0 and TLS 1.1 removal for Stack Exchange services
130
Community and Moderator guidelines for escalating issues via new response process (March-April 2020)