Did the automated CommonMark migration mess up the formatting of this answer?

I suspect the automated CommonMark migration messed up the formatting of this answer.

Before the migration to CommonMark: https://web.archive.org/web/20200515072655/https://unix.stackexchange.com/questions/136371/how-to-download-a-folder-from-google-drive-using-terminal 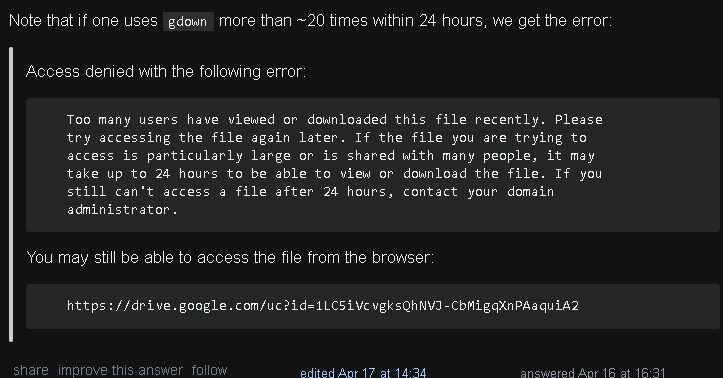 After the migration to CommonMark: https://web.archive.org/web/20200820183944/https://unix.stackexchange.com/questions/136371/how-to-download-a-folder-from-google-drive-using-terminal 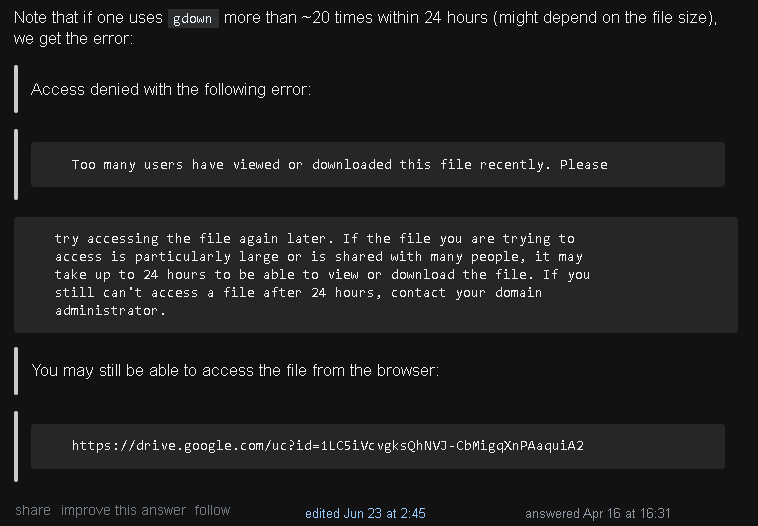 There was an edit between the two archive.org snapshots but it didn't affect that portion of the answer: https://unix.stackexchange.com/posts/580498/revisions

For full context: the Markdown source of the text in your screenshot:

There was no automated migration done for that answer. It was your edit that resulted in the answer being re-rendered.

First, remember that when a post is made or edited, it is only rendered once, and the HTML from that render continues to be served even though changes are made to the renderer. Re-editing a post will cause it to be rendered again, using the current version of the render. (This gets confusing when looking at revisions, as those behave differently and always render with the current version, but that's besides the point here.)

The rules list for that automated script was extremely basic, however, covering only the most common issues (e.g. ##Headings, block quotes without continuity, etc.), and excluding subtle nuances. This did, however, mean that if a post did contain such a subtle nuance, no matter how minor, it would prevent the post from being edited by the script, and so other issues that were covered by the script wouldn't be fixed.

In your case, the markup above uses two things that were compliant with the older renderer, but not with the new one:

In summary, your post wasn't compliant with the new renderer, and contained a problem that wasn't common enough to be included in the automatic migration script. This resulted in the old cached HTML from the previous renderer continuing to be served, which masked out the problems for a while, but as you just edited your post, the problems are now fully visible.

Yes, the migration to CommonMark did mess up that answer, because it does a couple of things that are not allowed in CommonMark. The culmination of those things likely prevented it from being detected by the automated scripts that attempted to edit old posts so they would render the same as before...

These two things together present a confusing situation that is hard to catch automatically. You'll need to update the answer to use correct CommonMark formatting. As currently written, it is being rendered correctly per the CommonMark specifications.

Did the automated CommonMark migration mess up the formatting of this answer?

That answer's revision history shows no evidence of an automated "Commonmark migration" edit by the Community user, such as those found here.

Manual edits by the author after the switch to CommonMark caused the rendered HTML to be changed ("wrong"). But prior to those user edits, the cached HTML rendered by the pre-CommonMark parser was displayed.

So the automated CommonMark migration didn't mess anything up, but the switch to CommonMark, plus a subsequent edit of any kind, did.

This possibility was called out in We're switching to CommonMark :

Things might get funky when you're editing a post that renders differently with the new CommonMark renderer. Again, if we detected that a post would look differently when rendered with the new CommonMark renderer during the migration, we wouldn't save a new version of this post as part of the migration. This way, all posts continue to look the same when being viewed. However, once someone comes in and edits it, it will be rendered using the new CommonMark renderer and this might cause the post to look slightly different than what we had before. This will only be a small fraction of all of our posts, and of that small fraction a smaller fraction will actually be edited moving forward. However, it's important to keep in mind that editing old posts has a slight chance that you run into differences between our old and our new markdown renderers.

Not the answer you're looking for? Browse other questions tagged support answers markdown code-formatting blockquote .

579
We're switching to CommonMark
12
How can I list all my questions and answers whose CommonMark rendering doesn't match the cached rendering?
2
Why was “Commonmark migration” notice suppressed here — and not everywhere?
2
Lines starting with a hash without spaces before the words stopped to be recognised as headers

13
Other than reformatting code, should you substantially alter a question's code samples?
579
We're switching to CommonMark
12
Automated CommonMark migration ruins long list items
304
Goodbye, Prettify. Hello highlight.js! Swapping out our Syntax Highlighter
732
New Feature: Table Support
1
How can I automatically edit all my answers and questions so that no quotes are broken down?