On downvotes, or more precisely, why people downvote things

After seeing the downvotes survey and, honestly, being very surprised that downvotes are targeted again, I took the initiative to sign up as a completely new user on SO, to understand, in my own way, why people complain that the attitude they perceive is unwelcoming/toxic.

I've spotted two obvious dissonances stemming from the very first moment a user decides to take a step into SO: the sign-up page.

On first sign up, you are met with this:

For comparison, this is the value proposition you signed up for at the earliest time the Archive was up:

This is a radically different message provided on the very first point of call with a user. For a start, there is a completely different perspective on the relationship built with them:

Not just that, but the entire message resonates further there: there is no indication that this was originally a canonical repository of answers, there is no mention of the purpose of the site, you are literally shown one thing: you can get unstuck.

Reputation at the core

These are the remaining items on the new site: 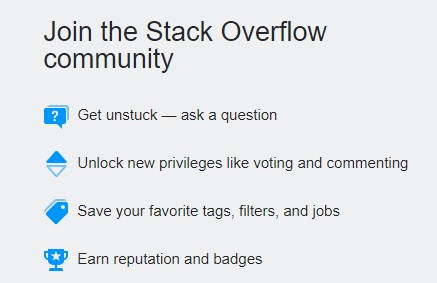 At no point does this put knowledge at the core of the value proposition. At no point are users shown that the purpose is knowledge, not reputation points; that the intent is sharing, not getting privileges; and that they are among peers, not rivals.

Coupled with point 1, it is very simple to see why a new user would get extremely annoyed. They're there to get unstuck, as the brief before sign-up states clearly as the very first item. They post their question they're stuck on (which, frequently, is an already-asked question), and get downvoted/closed.

However, since the other element of the value proposition is the rep that they've just lost (or felt they lost!), they attribute the issue to downvotes/closures, where the real culprit is that, from the first page, they are given a misrepresentation - that this is a "get unstuck easily" website, not a canonical repository of knowledge as it used to be.

How to fix this

The value proposition mismatch is between what people sign up for, and what the tools are built for.

If the purpose of this is to "get unstuck" (as the sign-up page states), then close votes, dupehammers and a whole bunch of other tools are redundant and/or nonsensical, and likely should be scrapped altogether.

If, on the other hand, the value proposition is learning/sharing and not "getting unstuck", then the sign-up page needs a rework.

The hard decision is on which path to go, as most of us likely know the old value proposition. I, for sure, would not have joined to get people unstuck, but that's just me. Others may differ.

At the end of the day, though, the "toxic community" perception of new users very likely stems from this dissonance, not downvotes themselves, and it'll likely be worth fixing that dissonance first.

(This came through a bit of discussion with Yaakov, Nick, and the other Discord regulars)

58
Does meta have to mean murder?
-15
Hide votes for self-answered by community wiki questions for a few hours

1222
Encouraging people to explain downvotes
863
Allow an edit to notify downvoters: "I think I've fixed the issue now - please check"
921
Why aren't people voting for questions?
1490
Fastest Gun in the West Problem
1840
Could we please be a bit nicer to new users?
2788
A Terms of Service update restricting companies that scrape your profile information without your permission
2501
Firing mods and forced relicensing: is Stack Exchange still interested in cooperating with the community?
719
Dear Stack Exchange: a statement and a letter from your moderators
2252
Stack Overflow is doing me ongoing harm; it's time to fix it!
1563
Thank you, Shog9