The same question should not be under both Linked and Related

Here is a recent example of this from one of my questions on English SE: 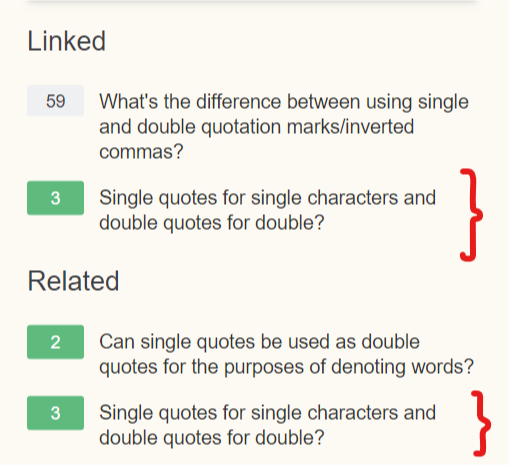 The Related questions should be filtered to remove any questions that already appear under Linked. This will avoid confusing the reader by making them think that these are two separate questions. Moreover, it seems that sometimes the score of the question can be different under Linked and Related due to caching, as pointed out in this Meta post.

I was not aware of Linked and Related sections contain duplicate links to questions, thanks for finding it. That was filed as a bug report, and was marked as status-bydesign.

However, I would like to rebut the argument provided in the staff answer to that question, in order to have this reconsidered as a request to change the design.

The staff answer was

It's not truly redundant because, though the links point to the same place, the fact that they're in both lists provides additional information. Specifically, it tells you that the system agrees that the link someone inserted is, in fact, related. The links are already pretty unobtrusive, so the small benefit outweighs the even smaller cost.

From a design perspective, what is the purpose of the sidebar providing links to similar question? The point of this feature, as far as I can tell, is to refer people who searched for this particular question to similar questions, so that they can find more useful information or perhaps the answer they are looking for in another similar question.

Websites like SO tend to have tons of questions related to a particular topic. It would be a waste to display the same question in both lists, if the purpose of the lists is ultimately the same (to refer users to questions that might help them). A Linked question, might, theoretically, not be all that relevant in reality. The same applies for a question deemed as Related by the algorithm. So, we do not gain any concrete information if a question appears in both lists.

On the other hand, having a question appear in both lists is bad UX in my opinion. This is valuable space, and linking to the same post twice not only causes confusion, but can be a hassle. The way it is implemented now, the color change for a hyperlink that you have already clicked is very subtle and might not be discernible by users with low or moderate vision impairment. You would have to open the hyperlink, realize that it’s the same as the one you already saw, and then go back.

So, why not link to a question that could potentially help the user, instead of linking to the same question twice?

955
Show all of my question/answers to me even if they are deleted
27
Linked and Related sections contain duplicate links to questions
94
Display other SE site links in the linked questions sidebar
416
Decision on rejected edits should be displayed as a notification to the editor
10
Difference in score between Linked and Related questions - is it caching, or a bug?