Multiple times in the past, when talking about the reasons behind Winter Bash, employees among other things mentioned it being a "way to promote participation during a period that usually sees a decrement in user activity".

Now, I think we can all agree on that. Many users seem to enjoy the yearly tradition of hat hunting (see the numbers in every year Bash closing-up blog posts) so it is quite clear the event is quite successful at creating more activity.

Now, it came to my mind recently that in the latest few years we have seen quite a number of hats that had a time specific trigger. From simple requirements of getting # votes on a question posted during the event period to creating new accounts on new sites, usually users have to reach specific goals during the event to get an hat. This obviously makes sense, since rewarding users for any action they did in the past would make some triggers trivial (got a gold badge once? Hat would be yours forever. We wouldn't want that) and also doing that would go against the reasoning we already mentioned before: promoting participation during the event period.

This in turn made me curious. Knowing that Winter Bash will probably offer rewards for posting intriguing questions, joining new sites and so on... it almost seems like the closer one gets to the Bash, the more one would want to "not waste" actions they could delay for a while to get an easy prize.
For example, should one want to ask a question on a new site a few weeks before the Bash... they could then decide to wait in order to join said site during the event.

Therefore, here is my simple question. It is pretty clear based on the data we see that the Bash brings a considerable increase of activity during the event, but.... has anyone documented a strategical decrease of activity in the few weeks preceding it? For example, do new users on sites suddenly decrease a few weeks before the event starts?

For example, do new users on site suddenly decrease a few weeks before the event starts?

That's something we can answer with the Stack Exchange Data Explorer: 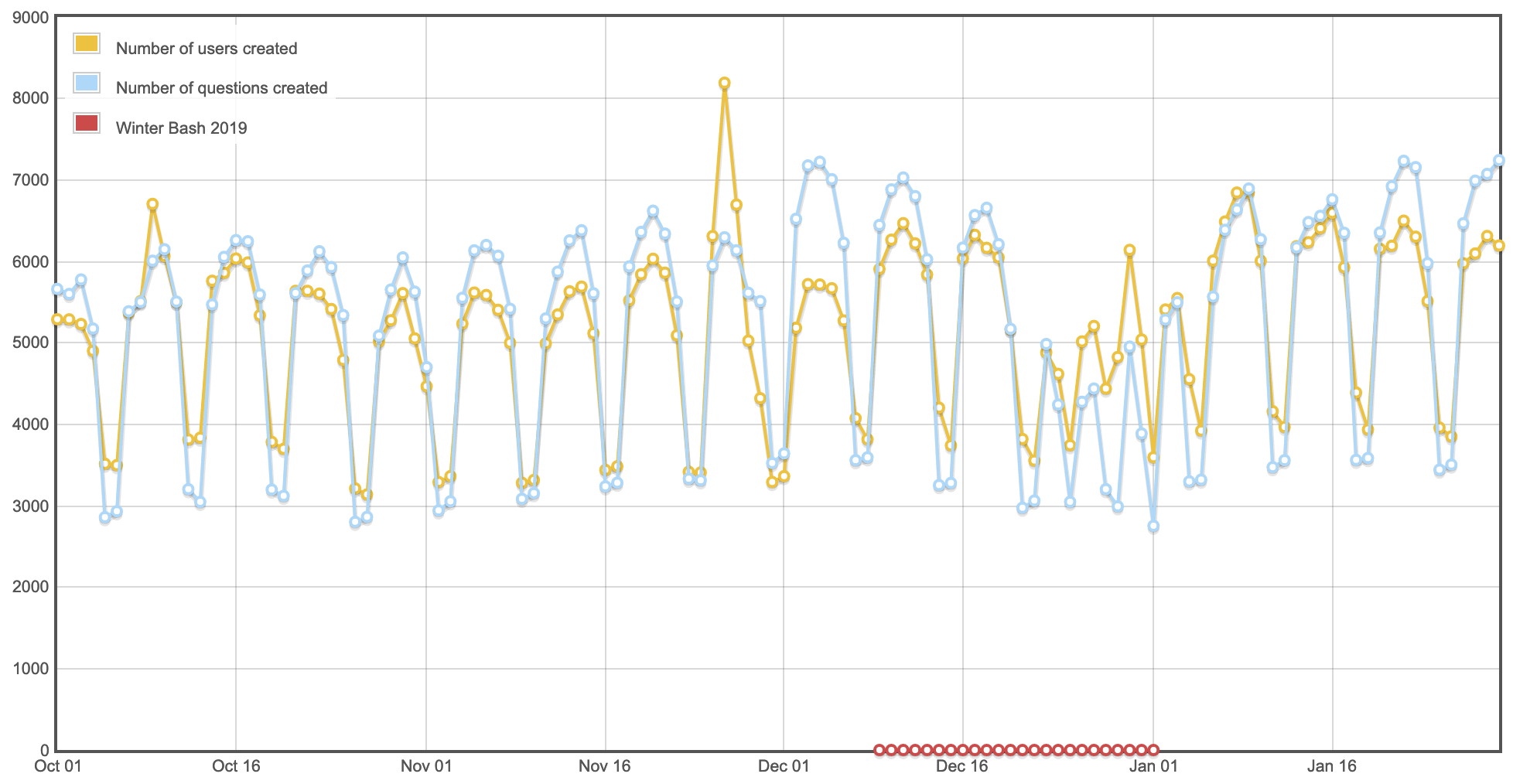 This is the number of users and questions created on Stack Overflow around Winter Bash 2019. I'm not sure what the spike in users at the end of November is, but otherwise it seems to follow a regular pattern, except for the two weeks following December 22nd, which is holiday season. In general, Winter Bash increases participation, but not enough to compensate for the holidays.

One of the nice things of SEDE is that you can easily run this query for other sites as well, and see if it makes a difference, but I doubt it.

(got a gold badge once? Hat is your forever)

Incidentally, that's not the case; you get hats because something happened during Winter Bash. Gold badges earned before won't count.

Not the answer you're looking for? Browse other questions tagged discussion statistics winter-bash participation .

533
The MIT License – Clarity on Using Code on Stack Overflow and Stack Exchange
2780
A Terms of Service update restricting companies that scrape your profile information without your permission
2442
Firing mods and forced relicensing: is Stack Exchange still interested in cooperating with the community?
715
Dear Stack Exchange: a statement and a letter from your moderators
2134
Stack Overflow is doing me ongoing harm; it's time to fix it!
576
We're switching to CommonMark
492
Thank you, Geoff
222
Winter Bash 2020 hat list 👒 🎩