Contest: what was the most impactful change on Stack Exchange in 2020? 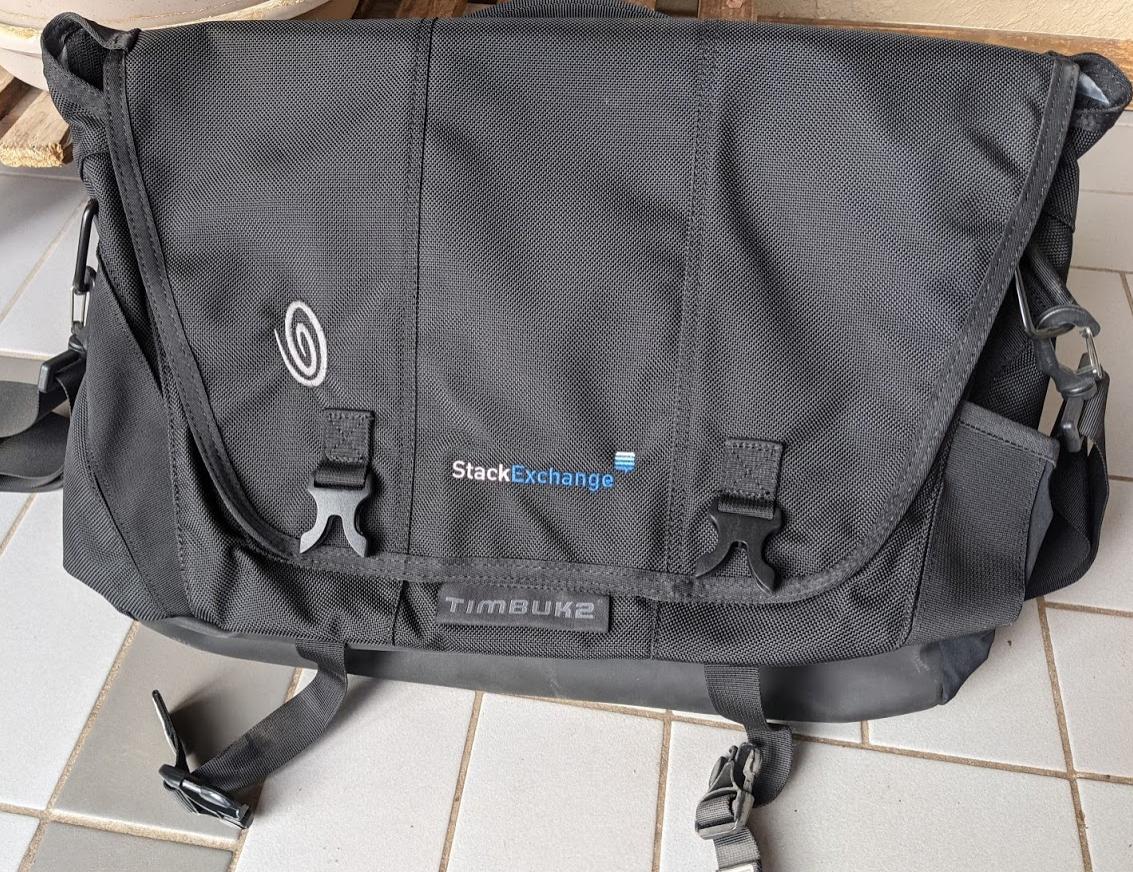 I've been... Kinda negative here lately, and it's pissing me off. Writing about that blog post the other day reminded me that I take a lot more pleasure in writing about the things that have gone well than in those things which didn't.

I think it's healthy to take pleasure in things that have gone well, especially as a group.

Six months ago, I tried a little exercise in reflection, with the intent of encouraging others to do the same. But frankly... It was a slog, and I'm not too surprised that no one else took the bait.

So I thought, why not do this the Meta Stack Exchange way: competing answers with opinionated essays!

Also, I found some unused swag in my closet, and needed an excuse to get rid of it.

I'm not a huge contest person, but... I think they can be enjoyable, as long as we all remember that it's just a game and the real winners are the folks who benefit from the insights produced during the exercise.

So, if you've ever wanted to own a nice Timbuk2 bag with the Stack Exchange logo on it, now's the chance to put your Keyboard Warrior skills to work!

Let's have some fun... I've posted my answer below as an example, but it will not be eligible to win. I'll post results at the end of February!

I spent most of 2019 firefighting. The decision was made that meta was no longer the primary means of communication - was something I disagreed with - (and was happy to monkeywrench by cross posting to meta).

I would say practically the root of the most impactful changes for 2020 are realising that past choices were wrong. We're not quite at an entente cordiale or what I would term 'a symbiotic relationship' - but we're also not quite in a situation where employees are scared of, or encouraged to avoid, meta. It's something that could inform the direction of the network if the company is willing to keep at it, and invest back into the community.

We have a foundation for something better - but I am still uncertain to whether that's a foundation of sand or stone we are building on. In between then and now, SE's occasionally made a few community-hostile decisions - but on the whole, I'm not constantly resolving some monumental, fresh mess up.

We have the community as a whole giving feedback on features - the work on commonmark and the new syntax highlight.js has SE devs, library authors and the community working together.

It's not quite a glorious summer of love, but the frosts have melted a bit.

So I would say, the biggest impact is - meta survived the year. But I have a slight bias here.

I would say, in 6 months I hope we have something more concrete than big plans. But right now, as a user of the network, and a MSE mod - the rededication to meta is a good starting point.

For me, it was that change in attitude that became visible by the way it is expressed on the Stack Overflow blog, accompanied by MSE questions that invited for our feedback.

Doing so created a bridge between the public-facing efforts of Stack Exchange Inc and "our" realm. Many might not care about that first part, but for me that creates a public commitment. They simply can't walk away from that easily. That is a pretty good rationale for the dot Inc folks to be careful about not losing face by annoying us users again.

And from my point of view, the fact that they simple share a vision and made asking for our feedback a reoccurring thing is of tremendous importance. Sure, their vision might not always overlap with "our" thoughts, but they listen and adapt.

Rationale. In terms of "impact", seen from a user perspective, the hiring was the one single change that impacted everything. (Bringing ambitious fast-paced roadmaps, that made effective so many changes they're nearly countless and sometimes hard to keep up with.)

The change I think will be most impactful

CommonMark - the formatting language we all use to write posts here was changed from a unique flavor of Markdown to a standard (albeit slightly customized) CommonMark.

Stack Overflow was one of the pioneers in popularizing Markdown, but after millions of posts written in it I think we're all aware of its deficiencies. One of my earliest memories of Stack Overflow's podcast was a discussion of the efforts of various community members to write a grammar for Markdown, with... Disappointing results.

CommonMark fixes that! - and more importantly, the migration to it brings Stack Exchange back into the larger community of sites, projects and people who are all working toward the same ends with tooling and content.

It's not the flashiest feature rolled out in 2020, but I firmly believe it will have the greatest long-term impact because of what it enables: collaboration with others.

Radical and oft-requested changes to our Creative Commons licensing policy occurred in 2020.

This was a huge step forward from Stack Exchange, both for demonstrating goodwill towards the community and to ensure the perennity of the site itself.

I will not emphasize the situation as it was in 2019, mostly because I want to play by the rules and focus this answer on the positive side of things, but let's just say we were there, and back then I had sunk to the point where I thought permanence of content (what I had signed on for in the first place -- an eternal repository of knowledge) was irremediably compromised.

But I was wrong. In early March 2020, Stack Exchange worked out a solution to our problem. SE developers then worked their rears off to deliver an implementation two months later. In both instances, community input was respected and taken into account.

The reason I believe this move is the real game-changer of 2020 is twofold. To elaborate on the points above:

It demonstrated goodwill towards the community, because it proved the SE staff could change their minds in the face of destructive endeavor towards our contributed content, as the community called them out on it. I honestly think this has resulted in quite a lot of good faith among those of us who spoke out before on that matter.

It ensured the perennity of the site itself, because things are now clear on the legal side regarding licensing, and we can now rest assured that the content we wrote ten years ago will remain under the license we agreed to at that time, and that future content will most probably follow the same track. This, in my humble opinion, is a good sign of contributed content remaining around for a while in a community-driven site.

I'll have to pick the new ask page. It is not exactly what I "designed" but on-boarding new question askers was long overdue.

I still want to believe Stack Overflow and the other sites in the Stack Exchange network are different than most other community content driven sites. Its difference is hardly understood in this current time-frame where almost every website / app has a textbox allowing you to spill your guts to the world. I sometimes wonder if even the company still understands how different their public QA offering is.

That said: Having guidance on that ask page and the review step should help a few percent of askers to improve their question before it gets thrown in front of the vultures to get picked apart. If what enters the system gets a tiny bit better it might lead to less friction downstream, more effective curation, better retention and who knows even appreciation from the Twitter bystanders.

I hope we can see some of that investment returned in 2021 and if proper data analysis shows it helped writing the script of the future I'm sure product management will put in more dev cycles to get even more script out of it.

Change in the "official" way how Meta impact is estimated.

now management have numbers to know what every regular on metas already knew for a long time: that metas are critically important and shouldn't be neglected and that SE can't simply get rid of them thinking that tomorrow will be a better day than yesterday...

It was announced and explained in second half of Feb 2020 and most if not all important changes of past year appear to be done based on a new official theory which gives more importance to meta: tables, dark mode, recovery of Hot Meta Posts at Stack Overflow, CommonMark, "following" feature, new ask page, new licensing scheme.

One can argue that some of listed changes aren't very important - if memory serves I saw this said about dark mode and "following" - but anyway, these were quite effort consuming features derived from popular meta requests, in the stark contrast with what we observed in the past, with previous official theory of .015%.

It was maybe even more prominent to observe impact of new approach on handling of changes that were reasonably quickly and firmly reverted per negative meta feedback: "thank you" reaction and technical site integration on Stack Overflow.

Granted, this new estimate doesn't look like coming out of thin air. Closer look at prior year of 2019 shows quite a lot of features addressing popular meta requests - as if folks doing these kept believing that meta is important. But these were rather heavily obscured by things done based on previous official theory of .015%.

If it wasn't that painful, I would say that 2019 was a year of discovery, when company tried to figure how come that things work kind of opposite to how it was expected per previous official theory and if there could be a way to do something about that.

Looking back, new meta impact estimation seems to make kind of a pivotal point, after which things have taken a distinctly different direction compared to how it was before.

For people who are not aware of what’s going on behind the scenes, one could argue that

and perhaps that's an optimistic way to look at things.

If I need to explain the rationale to you, you have already voted this post down. Enough said.

For me, it’s definitely the Updates to the Review Queues (project is still ongoing, but started in 2020 and I really wanted to write about it). I think this is impactful and a big step forward, especially because of the improved experience for users with review suspensions. Better looks, new help articles in easier-to-reach places; I think this will make for easier reviewing and teaching.

Not the answer you're looking for? Browse other questions tagged discussion contest .

582
We're switching to CommonMark
800
Recent feature changes to Stack Exchange
444
An Update On Creative Commons Licensing
226
Creative Commons Licensing UI and Data Updates
196
Introducing the Moderator Council - and its first, pro-tempore, representatives
-28
Responding to the Lavender Letter and commitments moving forward
229
Improved experience for users with review suspensions
52
How could we improve our planned post notice improvements?
147
What data about meta has eluded Stack Exchange until recently?
72
The new ask page is now live on the network!
See more linked questions