The planned work on Review Queues includes Backend Architecture changes (listed on our Public Platform roadmap for February). As this project is now concluded, I would like to report to the Community about what was accomplished.

This is a pretty technical post. Here is a summary for those who are less familiar with the topics discussed below:

First, some background on how Review Queues are populated:

When a user hits the /review/next-task route for a specific queue (by clicking on a queue name from the header or from within the reviews section), we return the details of a Review Task that the user is eligible to review. 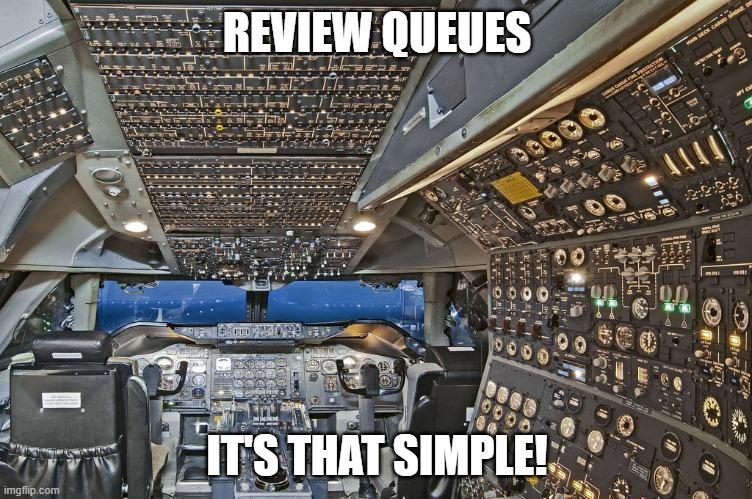 The current architecture has served us well over the years, but it has a number of areas that need improvement.

There are more plans for Review Queues in the future that we need our architecture to be able to support, potentially including:

We took a long time thinking and discussing ways forward here and strongly considered (including a lot of discovery and proof of concept work) rewriting the backend system. The goal would have been to move away from the scheduled Sync function controlling Review Task population, and instead to create a new system based on evaluating post events in real time to determine which items should be in a review queue. This could also have included making things more cache-based, enabling potential simplification of the next-task selection process.

In the end however, we decided to stick with the current architecture. It turns out that when you have a system with many inputs and complicated rules that need to be enforced in a performant way, rewriting the system while keeping the same rules will not make things less complicated - it will just move the complicated bits to other areas. We could potentially greatly simplify the generation and performance of the SQL queries that are currently used. However, this would come at the cost of creating a new framework that would spread out the current SQL complexity to different areas governing the population and maintenance of up-to-date metadata in cache for all items in a given queue (and the ability to reload the cache at any time). After benchmarking the actual performance of the queries today, we found out that the execution time and SQL loads from the queries are not as bad as we had thought (and feared).

So what did we do?

The plan shifted away from a full refresh of the architecture, and on towards actions aimed at addressing technical debt around the main issue we faced: the system was so complicated and poorly documented that we were scared to touch it.

Here is what we have done:

All code changes are now live, and we have realized performance improvements for new-task on every queue. Below are some stats, including general stats for queues, the percentage of task loads that are filtered, baseline SQL run times for next-task on each queue (default and filtered), and final SQL run times for each queue (default and filtered, including percentage improvement).

All times are in milliseconds, stats run on Stack Overflow. “BL” = “Baseline” and “FLT” = “Filtered”. Percentages in the Final columns are the percent improvement

Thanks for reading this far. We are happy to answer relevant questions below.

58
Plans for Updates to Review Queues

537
Recent Reputation History Changes
534
The current review system encourages fake reviews; some people upvote everything rather than actually fixing problems
2780
A Terms of Service update restricting companies that scrape your profile information without your permission
105
What criteria should we use to determine which review queue indicator a site will have?
2444
Firing mods and forced relicensing: is Stack Exchange still interested in cooperating with the community?
154
Improving the Review Queues - Project overview
66
Improving Review Queues - Design overview II: Changing review bans and other new features
225
Improved experience for users with review suspensions
119
Visual design changes to the review queues